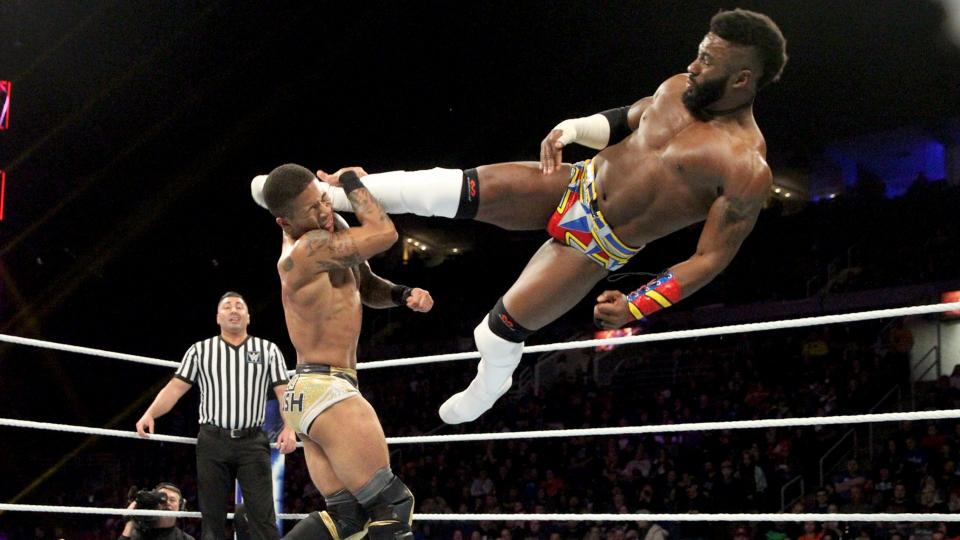 205 Live has been getting a lot of attention lately. Buddy Murphy will defend the Cruiserweight Championship against Mustafa Ali at WWE Survivor Series (seemingly on the main card, no less), Drake Maverick and Lio Rush are having successful stints as managers on Monday Night Raw, and the Lucha House Party are shoring up Raw’s Tag Team Division. Things are looking up for the Purple Brand and its exposure, and it couldn’t come at a better time, as a potential classic could be on the cards this Sunday.

The show starts with Drake Maverick waxing lyrical about the rivalry that Murphy and Ali have built with each other ahead of their Title match in four days time.

Moving onto tonight’s action, we have a tag team match with Akira Tozawa and Brian Kendrick looking to reverse fortune against the merciless Drew Gulak and Jack Gallagher. In the main event, Cedric Alexander looks to make an example of Lio Rush, who has taunted the former Cruiserweight Champion both in and out the ring since he lost the Title.

The familiar trio of Vic Joseph, Nigel McGuinness, and Percy Watson will be the voices to accompany the action on 205 Live this week. 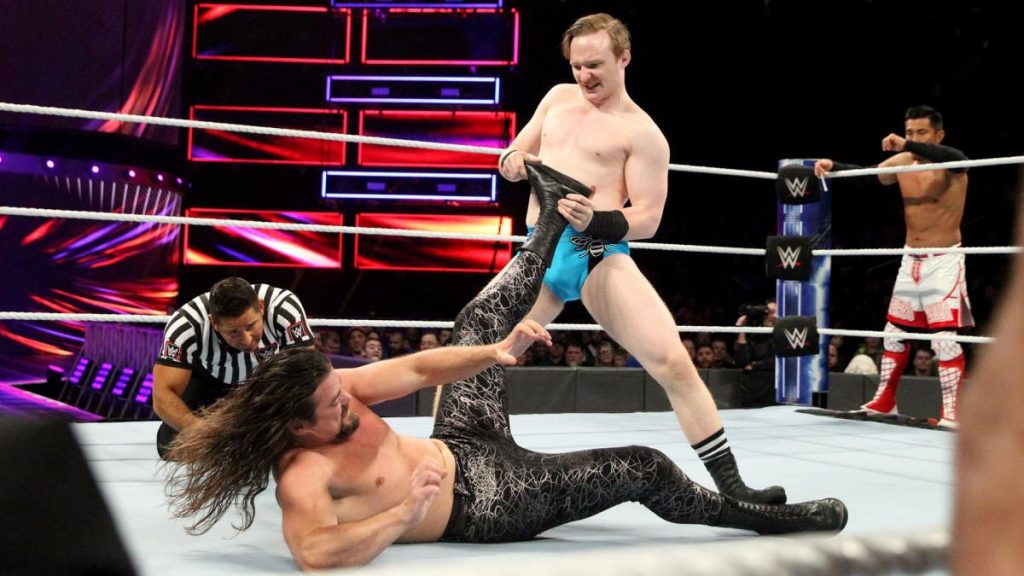 The unlikely duo of Kendrick and Tozawa are on the same side tonight. Considering their violent history against each other, it’s an odd sight. They seem to agree with this, as they awkwardly avoid answering the obvious question when asked about it before they make their way to the ring. Nevertheless, with both men suffering betrayal and attacks from their opponents, Gulak and Gallagher, they have no choice tonight but to work as one if they stand a chance at exacting revenge.

Kedrick and Tozawa’s thirst for vengeance sees them angry, but more importantly focused, as the match starts with frequent tags and frantic attacks of Gallagher. The Englishman escapes the onslaught by tagging in Gulak. He and Gallagher level the playing field with some underhanded tactics, quickly taking the wind out of Kendrick’s sails.

The tandem offense wears down the Man With a Plan. He tries and tries to work his way back into the match, but Gallagher and Gulak are masters of technical wrestling. The dastardly duo proceeds to take turns at wrenching Kendrick’s body in various uncomfortable angles. Gulak and Gallagher are in firm control as Tozawa waits in the wings, impatiently bouncing on the apron and showing support for his partner.

The beat down continues. A last-gasp boot to Gulak’s face, and a backdrop to Gallagher, offers Kendrick enough reprieve to crawl towards Tozawa’s outstretched hand. Tozawa is now in play, his pent-up adrenaline released in smart and short bursts against his foes. A nicely mounted Octopus Stretch has Gulak worried, but Gallagher throws Kendrick into the pair to break up the hold.

The comeback for Tozawa and Kendrick is dead in the water after this scuffle. Kendrick pleads his innocence to Tozawa over the breakdown, but the vultures circle and attack. Gulak earns a simple roll up for the victory. Tozawa and Kendrick continue to exchange frustrated words in the ring as the winners smugly walk up the ramp.

A sudden end to this encounter., which is a shame. However, this feels far from over. As is the case more often than not on 205 Live, I imagine these four’s paths will cross in the fullness of time.

Buddy Murphy is up next, and is asked by Dasha Fuentes about his physical altercation with Mustafa Ali during a pre-taped weigh-in. Murphy explains that he doesn’t care about the rivalry he and Ali have concocted over 2018. He claims this is all about HIS Cruiserweight Championship, and Ali’s desperate climb to the top will be for nothing, as Murphy will go to hell to defend his title successfully. Before walking off, he states that he almost feels sorry for Ali. 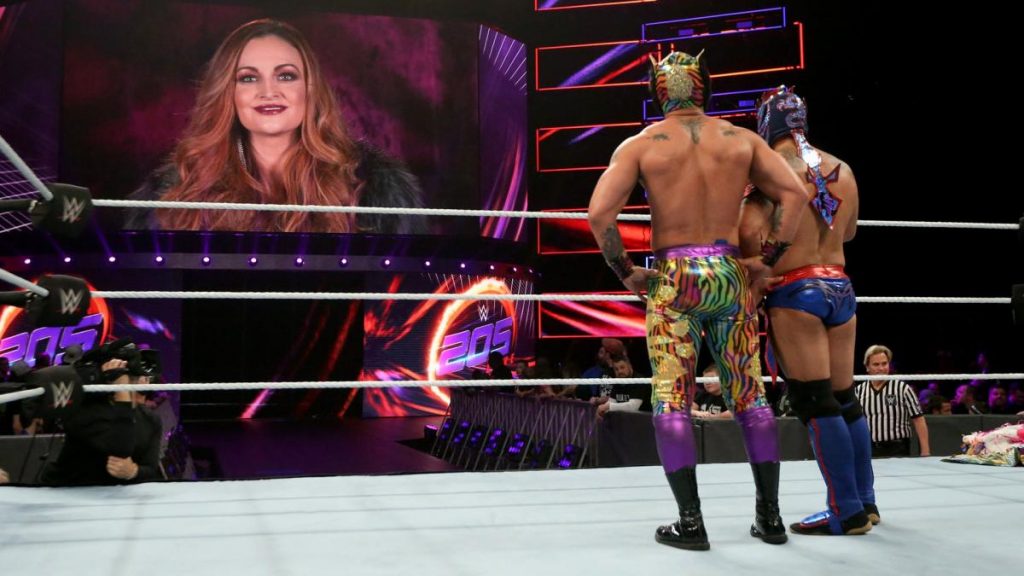 Presenting to you 205 Live’s mid-show “squash match”. This is nothing more than target practice for the Lucha House Party double act ahead of their representing Raw’s Tag Team at Survivor Series. Tandem offense is galore. It’s nothing we haven’t seen before, but it has to be said that Kalisto and Dorado work really well as a duo. There is definitely an opportunity for them to impress on Monday Nights.

A Solido Del Sol – Shooting Star Press Combo from the pair makes easy work of Kraig Keeserman (yes, that was the name he was given) as Kalisto follows up his finisher by taking Mike Karma out of the equation on the outside, allowing Dorado to score the win.

The “First Lady” of 205 Live, Maria Kanellis appears on the big screen as the luchadors celebrate. She says that there is still unfinished business with TJP and her husband, Mike Kanellis. She warns them that they should enjoy their party while it lasts. She finishes by wishing Gran Metalik good luck as he will face TJP next week.

Cedric Alexander is warming up backstage and gives us a spirited speech about how he has to rebuild his legacy after falling so far. He claims that the Age of Alexander returns tonight. 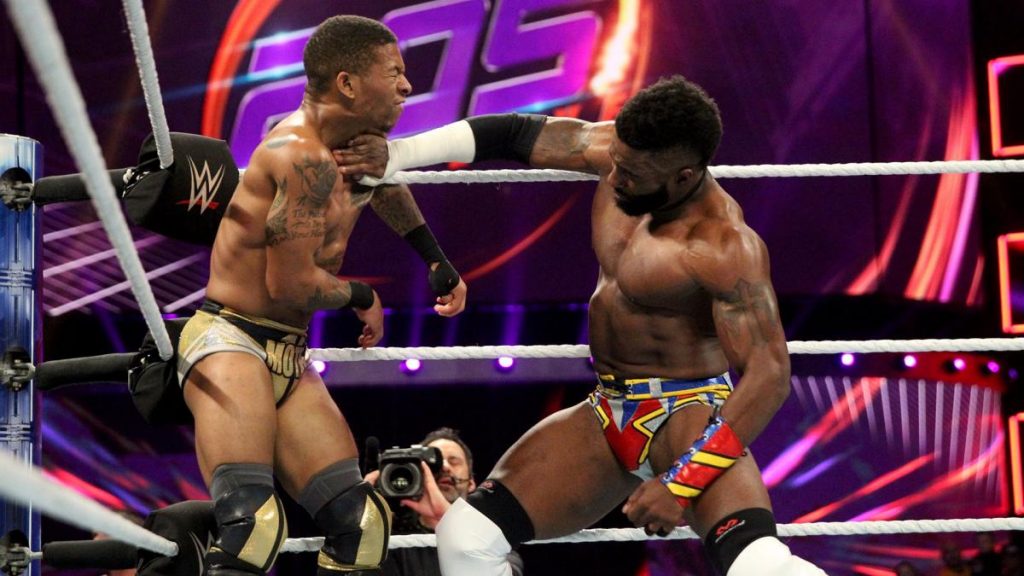 For a man of a smaller frame, Lio Rush sure does have a big mouth. So far on 205 Live, however, he’s backed it up in the ring. He faces off against the target of his recent verbal assaults in Cedric Alexander, a man in the middle of a crisis of confidence.

Dueling chants for Lio Rush ring out from the crowd as a show of strength starts the match. Rush is definitely a divisive character. His mouth gets him in a lot of trouble (his tweets as well…), but it’s hard not to be impressed by his rapid style. I imagine that, in an alternate universe, Rush is the Dodgeball Champion of the World…

To hammer home the above points, Rush riles Alexander to the point that the former Cruiserweight Champion begins to lose his cool. Initial charges are dodged by Rush, but Alexander’s power and experience take over, allowing him to overpower the Man of the Hour.

Last week, Alexander was seen training in the WWE Performance Centre. Rush may have mocked him for this, but Alexander seems to have amplified his own speed game as he maliciously throws numerous dropkicks all over Rush’s frame.

Alexander’s dominance is short lived. Rush plays possum, luring an incoming Alexander into the turnbuckle. Rush then shows surprising feats of strength as he rag-dolls Alexander around the outside of the ring. Rush’s cool demeanor has dropped as he begins to show his angry side, lashing out with pin attempts and harshly applied headlocks.

Forgetting himself, Rush flexes his bicep atop Alexander’s back, but Alexander powers through the humiliation. Rush earns some offense, but Alexander kicks out at one for the second time.

This angers Rush further. His kicks land harder each time as he stalks his prey. He picks up the pace which, unfortunately for him, Alexander is able to match and even surpass. A Neuraliser gains him a two count and a brief respite.

The pace increases exponentially, as the near falls become a big part of the match. Many two counts later, Alexander has that doubt in his eyes again. The doubt that’s plagued him since Super Showdown.

Rush sees that doubt and capitalises with a modified Unprettier, but Alexander kicks out just in time. The action becomes too fast to follow. Both men sprint at each other and a Spanish Fly is landed. However so fast was the action, I don’t even know who instigated the move!

After a series of high impact reversals and near falls, Alexander lands an ultimate Spanish Fly (it must have been Rush’s the first time then. Honestly, you have to see this to understand my frantic confusion!). A Lumbar Check follows, and Alexander ends his losing streak with a win over Rush.

This was a really fun match to call. Rush continues to impress with his admittedly varied character and aggression. Alexander’s journey to redemption is wholly more interesting than his so-so title reign. Hopefully, both men have equally compelling chances to shine in the future.

Mustafa Ali closes out 205 Live with a pre-taped promo video in the locker room. Ali says the Cruiserweight Championship means more to him than Murphy will ever be able to understand. The match on Sunday will come down to Murphy’s strength vs his speed. Murphy’s aggression vs his determination. Murphy’s anger vs his Heart. On Sunday, Murphy will learn that the Juggernaut will not stop the unstoppable.

Once again, Ali’s play on words, examples of diametrically opposed traits, and impassioned messages to his opponents all further enhance my belief that he is one of the most gifted talents in all of WWE, never mind 205 Live.

I don’t fancy his chances at Survivor Series, to be honest, what with Murphy’s reign being so short. I see Sunday more as an opportunity for the wider WWE audience to see just how impressive the stars of 205 Live are. With the momentum and exposure they have recently been afforded, it’s best to wait for a bigger stage for Ali to claim what is, in my opinion, most deservedly his: the Cruiserweight Championship.

For my take on WWE outside of the 205 Live bubble, check out my latest podcast of “The Ricky & Clive Wrestling Show“. Ricky & Clive get together for their preview of WWE Survivor Series 2018. It hasn’t been a well hyped Big Four PPV, what with a busy calendar of events the last month or so. On top of that, unfortunate last minute changes to the card have occurred as a result of Becky Lynch’s broken face and concussion, and Daniel Bryan winning the WWE Title. All of this, and our official predictions are on offer this week, with a Survivor Series themed Quiz to end the show.