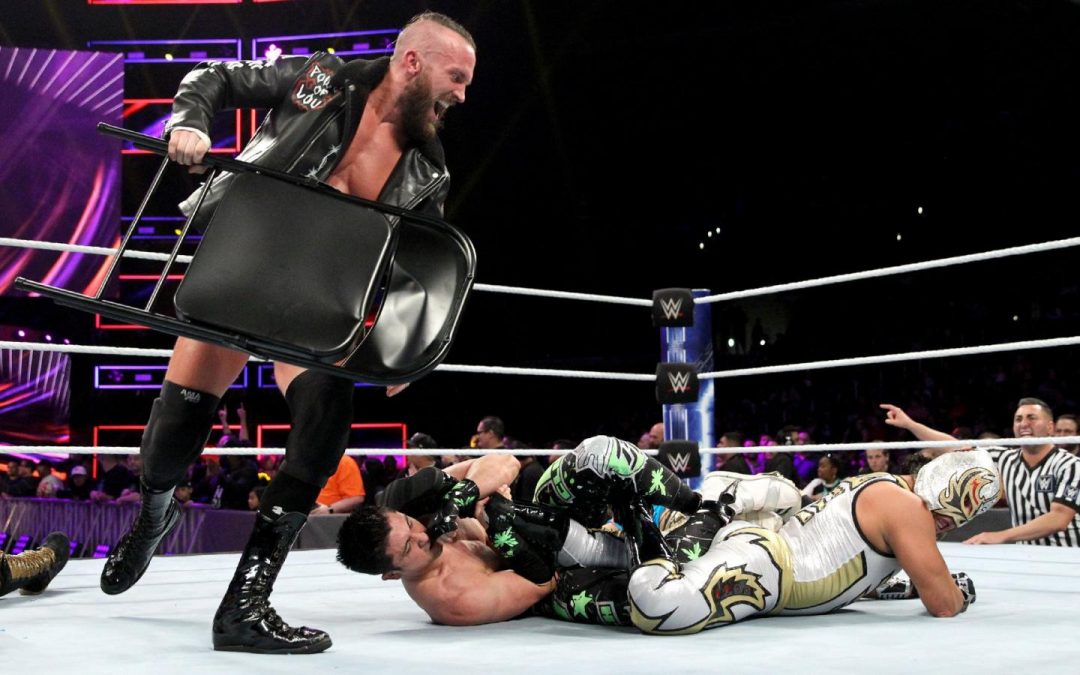 Three nights have passed since Buddy Murphy and Mustafa Ali represented 205 Live on the main card of WWE Survivor Series. Both men should be proud of their efforts; their performance was a great advert for what you and I are lucky to see on a regular basis in the WWE Cruiserweight Division.

This week’s episode starts with video highlights of Ali’s unsuccessful title challenge. Once the credits have rolled, we head straight into the arena with Buddy Murphy’s music playing.

Murphy welcomes the fans in attendance to “his” 205 Live. He asks if the crowd really thought Ali would beat him at Survivor Series. He continues by saying that he proved to the rest of the world that you can’t stop the unstoppable. Murphy cuts a smug figure as Tony Nese’s music plays; the Premier Athlete makes his way to the ring for tonight’s first match.

Noam Dar’s stock has risen of late. As he states in a selfie video, Dar has been working hard on NXT UK but is now looking for an opportunity on 205 Live. He finishes by saying he has….eight reasons… to knock that “dafty’s” head off. Ahh, good old Glaswegian insults. I feel at home right now…

The Scottish Supernova seems to have dropped (some of) the theatrics since his return from injury. He fits in some occasional mockery as per, but there is more focus to his wrestling, especially tonight. A great start with discombobulation of Nese is cemented with a penalty kick style sweep of his legs from the apron, cemented with a subsequent baseball slide dropkick.

Looks like I spoke too soon with Dar playing the serious game. He gets in Murphy’s face, allowing Nese time to attack from behind and throw Dar back into the ring to gain a foothold in the match.
Whilst Nese has Dar in a rear scissors lock, Murphy makes his way over to Vic Joseph, Nigel McGuinness, and Percy Watson, brashly proclaiming he and Nese run the division.

Back in the ring, and guttural knees are dished out by Nese. He looks to cross-body Dar, but the Scotsman ducks, sending Nese flying across the ring. Dar works in some offense that earns him a two-count. Murphy looks concerned for his workout partner. Nese attempts a comeback, but Dar is all over him like a straight jacket, suffocating him with a series of body-hugging submissions.

Out of nowhere, Nese breaks out of the hold with a brutal Northern Lights suplex pin. Dar is understandably rocked. His propensity for sweeping kicks gains him a momentary glimpse at recovery, but a distraction from Murphy on the outside affords Nese a sneak attack. A snap German Suplex into the turnbuckle is followed up by a Running Nese, and a greedily grasped pin, for the victory.

Murphy comes in to celebrate with Nese. The Cruiserweight Champion doesn’t waste any time in attacking Dar after the match. Could this be the start of an ongoing opportunity for Dar in the future? The Scots are doing well all over WWE after all….
Mustafa Ali has a pre-taped video next. He says he wants to keep hold of the pain he is going through right now. Remembering that pain will help him rise back to the top. He wants to thank Murphy for beating him. He will turn this pain into power, and promises he will become the Cruiserweight Champion.

Drake Maverick is up next and warns the referee for tonight’s main event to ignore any potential shenanigans at the hands of Maria Kanellis.

Shortly after, Cedric Alexander has a big smile on his face after his big confidence-boosting win over Lio Rush last week. Maverick announces a match that he has wanted to see on 205 Live for a while: Cedric Alexander & Mustafa Ali vs Tony Nese & Buddy Murphy. A little side note: this is a match I predicted a few weeks ago. You are most welcome, Mr. General Manager. Any further booking advice, you can catch me at my Twitter details above!

The commentary team discusses this comment during the match (which, again, has two nameless wrestlers to help further the story Kendrick and Tozawa not yet seeing eye to eye). Granted, the pair had a breakdown in communication when they lost to Gulak and Gallagher last week. It could be argued that their quests for revenge are individual, and they won’t be able to unite for the common goal.

That is not the case tonight, however. Tandem moves. Clinical assaults. Subsequent finishers. Tozawa and Kendrick make quick work of their opponents.

To further cement just how on the same page the team now are, Tozawa manages to convince Kendrick to join in on the “HA!” chants. What a bizarre sight.

Dasha Fuentes stops Nese and Murphy for their comments on next week’s tag team match. Murphy makes a quip about this being the possible unveiling of the Cruiserweight Tag Team Championships that everyone’s been talking about. A rather tongue-in-cheek breaking of the fourth wall here by the Juggernaut. Nese and Murphy laugh off their competition for next week. After hints of unrest between these two a few weeks back, all seems to be well as the 205 Live version of the Two Man Powertrip continues on.

As well as the tag team match for next week’s 205 Live, an advert for Hideo Itami’s return to action comes up next. It’s looking like next week will be an interesting show to watch!

The war TJP has single-handedly waged against the Lucha House Party, with the sole intention of taking their masks as hunter trophies, rages on. Despite the numbers advantage, TJP’s disrespect towards Metalik, Lince Dorado, and Kalisto, is nearly relentless. It’s up to Gran Metalik to restore some pride and honor for him and his stable. That numbers advantage is beginning to dwindle, however, as the Kanellis’ have started to aid TJP on his hunt.

Once the Lucha House Party are in the ring, the Kanellis’ entrance music plays. Maria and Mike come out, joined by a mask-wearing TJP. This immediately gets the luchadors’ backs up. Tempers flare in a fiery moment rarely seen in 205 Live as referees break up the “stramash” on the ramp. Drake Maverick comes down to calm things down. He orders the Kanellis’, and Kalisto and Dorado to the back, ensuring the singles match between Metalik and TJP can go on unhindered.

The Cruiserweight Classic finalists have worked together several times before, and the one-upmanship is a practiced dance between the two tonight. As if on cue, McGuinness pipes up with “anything you can do, I can do better”.

Once normal service has resumed, TJP slows things down with a series of chain suplexes and his typical knotted submission style. He tries a cheeky swipe of Metalik’s mask, but Metalik is too riled up to let that happen to him. So far …..

TJP nails Metalik with a hog-tied gutbuster. The self-coined “Cruisergreat” then has a modified Indian Deathlock that keeps Metalik grounded. Metalik grabs the bottom rope, but TJP takes his time releasing the hold.

Metalik looks to dump TJP face first from the turnbuckle, but the move is executed awkwardly. Admittedly, there have been a couple of clumsily applied moves in this match. I wonder if the adrenaline from the intense exchange between all parties earlier has gotten to Metalik.

Thankfully, he finds his comfort zone on the ropes. He works in a series of offense by dancing from tier to tier, evading TJP then landing dropkicks. Then, as if to shut up my criticism, a leaping hurricanrana over the rope to TJP (on the apron) onto the floor has stunned TJP.

Metalik capitalizes with a Metalik Driver in the middle of the ring. Somewhat naively, Metalik climbs the turnbuckle, rather than go for what would surely have been a successful pin attempt. His Frog Splash meets TJP’s vertical legs before the Luchador Hunter applies the Inverted Kneebar.

Metalik scurries out of the submission. TJP keeps momentum on his side with a hurricanrana, but Metalik rolls through with a surprise win for the King of the Ropes.

Dorado and Kalisto come to the ring to celebrate. Not for long, however, as Maria Kanellis spills hysterics into a microphone at the top of the ramp. The distraction allows Mike Kanellis to rush the ring and help TJP take out the Lucha House Party from behind. Kanellis drops the act, and saunters down to the ring for a closer view of the beat-down, as 205 Live goes off the air.
This was a pretty eventful episode of 205 Live. Two decent matches to bookend the show. Murphy and Nese’s double act sets its sights on more of the roster, other than just Alexander and Ali. Maria Kanellis has injected some welcome drama into the dismantling of the Lucha House Party. And Brian Kendrick and Akira Tozawa are on the same page, hopefully, ready to try their hand at Gulak and Gallagher with a more focused vision of teamwork. Not bad at all for a mere forty-five minutes of your time!

Check out my thoughts on NXT Takeover: Wargames II, and WWE Survivor Series in our latest podcast of “The Ricky & Clive Wrestling Show”. This week, Ricky & Clive discuss WWE’s last “Big 4” weekend of 2018, with their thoughts on NXT Takeover: Wargames II, and Survivor Series. Many talking points came out of both nights, be them match quality or storyline repercussions, and R&C try to cover it all, including Charlotte’s actions against Ronda Rousey, and Dean Ambrose’s controversial reference to Roman Reigns’ battle with leukemia. We finish with a quiz based on wrestlers Ricky hates the most.