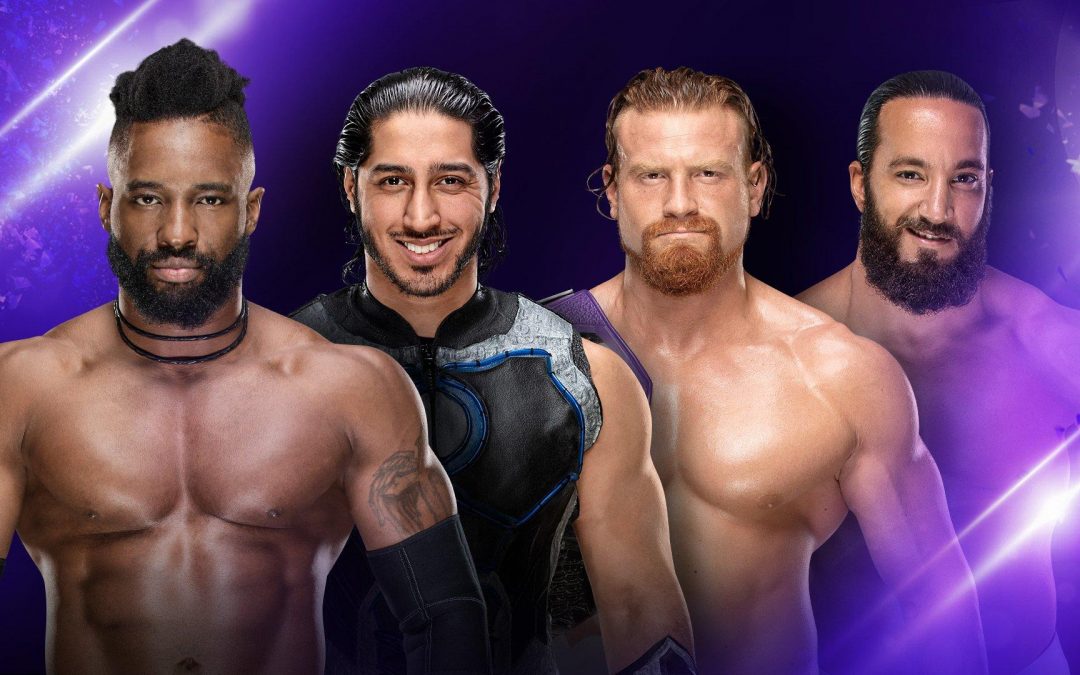 General Manager Drake Maverick opens the show with a vignette hyping what should be an action-packed episode of 205 Live. Noam Dar will return to the show to take on Mike Kanellis. Hideo Itami will make his long-anticipated return after falling to defeat at the hands of Mustafa Ali in a memorable blood feud.

Lastly, in what Maverick has dubbed the biggest tag-team match in 205 Live history, Cedric Alexander will team up with Mustafa Ali to take on a common enemy in Tony Nese and Cruiserweight Champion, Buddy Murphy.

Vic Joseph, alongside Nigel McGuinness and Percy Watson, welcome us to 205 Live and this week’s opening bout. Despite an attention-grabbing first impact on the Purple Brand, Kanellis’ threat to the wider roster is still largely untested, so wrapped up in a war is he with the Lucha House Party, alongside TJP. Dar, a 205 Live original, has matured considerably since his return from lengthy injury. His impressive performances so far on NXT UK have also helped him gain some credibility points of late. Tonight will be a test for both men.

Kanellis takes time away from a collar and elbow tie up to blow a kiss towards the star of the outfit, Maria Kanellis, who joins the commentary team. Dar mocks Mike by “innocently” waving at Maria; a callback to Dar’s meddlesome ways when it comes to romance.

Mike is unhappy with the extra attention his wife is receiving and pinballs Dar around the outside of the ring. Dar is comfortable in his abilities, however, and refuses Kanellis the chance to inflict more damage back in the ring with some blocks and a well-targeted strike to the chest.

Kanellis finds himself on the mat, frustrated and embarrassed. What starts as mild humiliation looks like it could grow as the Lucha House Party’s music plays mid-match. Maria is incredulous on commentary. Lince Dorado, Kalisto, and Gran Metalik have many props synonymous with their stable surrounding them on the ramp.

They advance no further, but this proves enough of a distraction for Dar to strike. A “Nova Roller” kick to Kanellis, and an easy win for Noam Dar.

The ever-affable Scot swaggers up the ramp after his victory and proceeds to dance with his mates for the evening, noisemakers and pinatas in tow.

Brian Kendrick and Akira Tozawa are training backstage. Kendrick has softened when it comes to the sprightly character of Akira Tozawa. The sparring breaks down into Kendrick violently attacking Tozawa’s sparring glove before Kendrick calms down and walks off screen.

Jack Gallagher and Drew Gulak are up next behind a podium. Gulak reminisces about when Kendrick was an ally, but that all changed when he began to show mercy to others. Gulak continues to berate Kendrick, and in turn, Akira Tozawa. Next week, Gulak warns that he will tap Kendrick out, in what is now an official match between the two.

The eagerly anticipated return of the Japanese Legend to 205 Live is a welcome one. His impact on the show in such a short time has shown how valuable a character as his is.

The bell rings, and your enhancement talent for the evening, Levi Cruise, receives a high kick to the face to start things off. What follows is nothing short of a systematic decimation of Itami’s opponent. The match is over in seconds.

Itami is in the middle of gifting Itami a post-match beating when Ariya Daivari’s music hits the speakers for the first time in seven long months due to an injury. Daivari enters the ring and squares up to Itami. His attentions fall elsewhere, however, as he attacks Cruise on the floor. He offers Cruise up to Itami who lays the poor young man out once again.

Daivari proffers his hand to Itami, declaring respect for him. I have to admit my surprise at the alliance. So isolated is Itami from the rest of 205 Live in his crusade of hatred, Daivari willing to join Itami in this quest is a compelling one. On the surface, however, this is another tag team pairing. When oh when will these tag teams have some gold to fight for??

Drake Maverick is backstage getting an earful from TJP. Perkins wants one good reason for why he isn’t the #1 Contender for the Cruiserweight Championship. Maverick brings up TJP’s loss to Gran Metalik last week, suggesting that merit and results is what affords you opportunities on 205 Live. TJP retorts that this could all be down to Maverick’s “problem” on Monday Night Raw, making reference to Maverick’s propensity for urination. Interesting that they have tied up the fiction of Monday Night Raw and 205 Live, rather than keep their characters and stories separate.

Any number of events could take place in this star-studded tag-team match. Nese and Murphy are on a tear through the 205 Live roster, with the Juggernaut looking to add another victory over Ali and Alexander to his record. Regarding the heroes of the piece, Alexander’s personal rock bottom recently saw him hint at betraying his friend, Ali. Could the cockiness of Murphy and Nese, which is followed up successfully – more often than not of late – be the straw that breaks the camel’s back?

Alexander and Nese are the two to start tonight’s main event. Alexander has found his confidence again, but Nese was the one to add insult to injury in the first place, being responsible for Alexander’s losing streak.

The power battle between the two quickly transitions into a show of athleticism, with Alexander gaining the upper hand. He locks eyes with the Cruiserweight Champion during a two-count over Nese.

Murphy and Ali have been tagged in now. Murphy disrespectfully shakes his head at Ali’s attempts to gain a foothold in the match and is awarded a hurricanrana for his troubles. Nese tags in and hits out at Ali who grudgingly makes his way back to his corner as Nese and Murphy swap frequent tags and break down Alexander over a course of strikes and submissions, tight in their corner.

Ali is frustrated on the sidelines desperate for a tag. He gets this after Alexander fights his way out of tandem offense. He enters the ring with a high cross-body. Nese rolls to the outside and Ali delivers a sequence of signature offense but takes a page out of Murphy’s book with a sit-down powerbomb for a pin attempt. The count doesn’t reach three, and the Juggernaut begins to power up again as he uses Ali’s momentum against him and drives him face first into the bottom turnbuckle.

Murphy kicks Ali out to the floor and into the waiting arms of Nese who beats down on Ali. Back in the ring, and Nese steps on Ali’s hair as he tags Murphy in. Nese’s time in the spotlight of 205 Live has been a joy to see. His allegiance with Murphy has given him the chance to showcase his abilities a lot more and, frankly, it is deserved.

Murphy lays Ali out with a monstrous right hand, as the Champion taunts Alexander on the apron. Murphy almost falls victim to a roll-up pin by Ali, and the Heart receives a wicked clothesline as punishment. Nese and Murphy take Ali to the corner and look to more tandem offense. But Ali dodges an incoming Murphy who spears Nese to the floor.

Ali drags his battered body over to Alexander for a hot tag, but Nese uses the preceding events to his advantage, running the circumference and pulling Alexander from the apron. The pace has picked up significantly in this match now.

After a foray of counters and kicks, Ali and Murphy tag in their respective partners. Alexander is fired up and even takes time out from dominating Nese to throw a cheap kick Murphy’s direction. Once on the apron, primed for his springboard clothesline, he again lays Murphy out on the apron. This time, however, Nese has the wherewithal to level the playing field. This gifts Murphy enough respite to help his partner. Alexander breaks free, however, and brings Ali into the fold.

With Nese and Murphy nursing their injuries in the turnbuckle, Alexander and Murphy plot some modified Tower of Doom move. This ends in disaster, however, as Ali and Murphy fall to the floor. This looks like a mistake on the surface, but with Alexander being the foundation of this tower, was this accident a subconscious decision by Alexander?

As if to answer that question, Ali has Murphy set up for a tornado DDT, but Ali is tagged out of the action for Alexander to hit the Cruiserweight Champion with a Lumbar Check for the win.

On the surface, this is a positive and important win for the two babyfaces. However, there was more seed planted that would support a potential heel turn by Alexander. Ali seems happy with the victory, even with Alexander jumping in at the last second. But could Alexander’s return to winning form see a greed in him? A greed that puts his friendship with Ali at risk? Or even worse, will that greed for success bring out a dark side in Alexander? Time will tell in the coming weeks of 205 Live.

Check out the latest episode of “The Ricky & Clive Wrestling Show“. With the surprise announcement of NXT UK having their first Takeover event in less than two months time, Ricky & Clive delve back into their “home turf’s” brand, discussing the news, and NXT UK’s TV product so far. In addition, we look at the news where some of WWE’s British wrestlers’ new contracts exclude them from Independent scene, as well as the rumor that the new hoss signing, Walter, will ply his trade in this brand rather than in the original TLC. Lastly, R&C discuss their upcoming attendance at ICW’s big event of the year, Fear & Loathing 11, this Sunday. A British wrestling themed quiz closes the show.