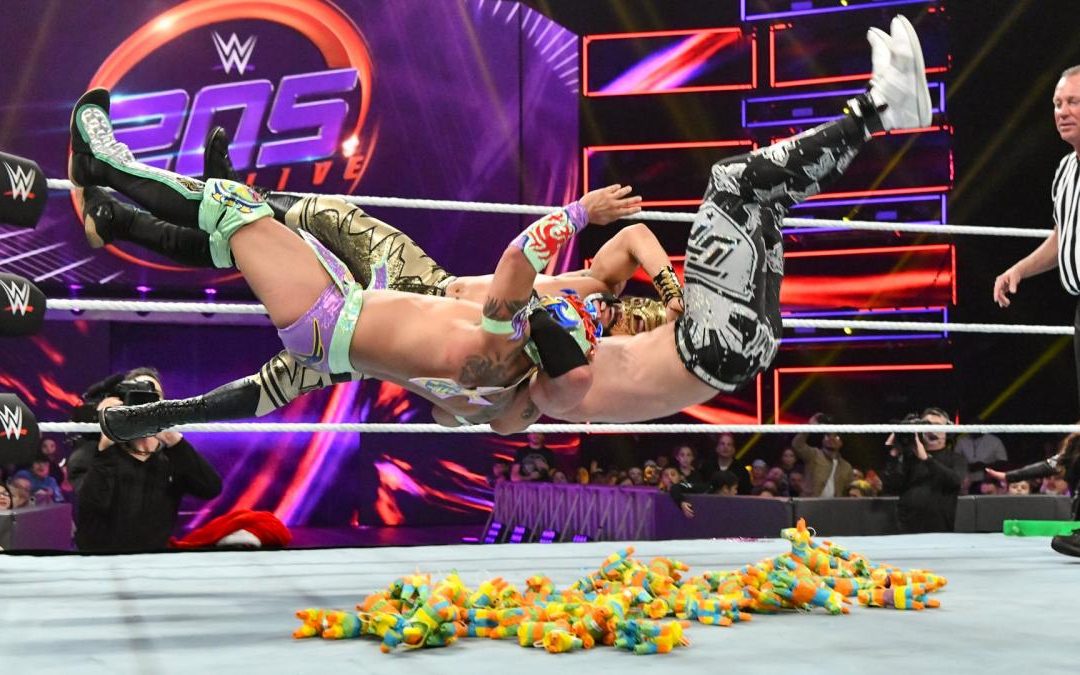 Tensions have become fraught and borderline hysterical on 205 Live of late between the Lucha House Party and their opponents for the evening, TJP & Mike Kanellis.

While TJP’s luchador mask hunting campaign has seen TJP at his dastardly best, all stories have a shelf life. However, thanks to the injection of Mike Kanellis and, probably more successfully, his wife Maria, the animosity between the two groups of three has reached fever pitch. Tonight, both teams look to restore some pride among their own ranks in tag-team action. Although Maria won’t be competing, it’s safe to say she will have an impact in the match.

Elsewhere, Brian Kendrick finally gets his hands on Drew Gulak, the man responsible for exiling Kendrick from his and Jack Gallagher’s merciless plow through those opposed to their vision of a Better 205 Live.

205 Live General Manager, Drake Maverick, gives us the traditional hype package introduction for tonight’s matches. Maverick also confirms that, thanks to Cedric Alexander earning the pinfall in last week’s tag match with him and Mustafa Ali against Buddy Murphy and Tony Nese, Alexander has won an opportunity to face Murphy for the Cruiserweight Championship. Murphy’s thoughts will be heard tonight. Not a bad match to open 205 Live this week, it has to be said! Gulak and Kendrick are joined by Jack Gallagher and Akira Tozawa respectively for moral support only…

Gulak displays a slight dominance in the initial lock-ups between the two. Gulak may be a grappling machine, but Kendrick is no spring chicken when it comes to this style of wrestling; he blocks an early Gulock attempt after a walloping clothesline floors him.

Gulak is repeatedly on the cusp of taking Kendrick’s leg out of the game with a variety of tight holds but, again, Kendrick is wily enough to get back into the match. A German Suplex earns Kendrick some respite, but not enough for him to gain a proper foothold in the match. A hurricanrana is reversed into a Powerbomb by Gulak, and Kendrick’s kick-out of a pinfall is mercilessly folded into a single-leg Boston Crab, putting further pressure on Kendrick’s left ankle which is fast becoming Gulak’s target and strategy for tonight.

Both men exchange Irish Whips later on, and Kendrick delivers a leg lariat. Again though, very clinically it has to be said, Gulak grabs Kendrick’s ankle, much to Kendrick’s despair. He wriggles free, but Gulak is like a straight jacket tonight, as mat based headlock swiftly follows.

The technical showcase breaks down into a fist fight. This is more Kendrick’s style. He wins this mini-battle, and flips Gulak into a Captain’s Hook submission. Gulak’s feet on the ropes earns him an escape, but he receives a rarely seen Full Nelson Suplex for his struggles.

Tozawa offers support on the outside, and Jack Gallagher runs him into the ringpost. Gulak looks to capitalise on the distraction as Kendrick looks on, but the Man With a Plan is smart enough to turn the incoming into a Sliced Bread for a near-fall. The red mist has descended upon Gallagher however. The Englishman rushes the bring and attacks Kendrick. The referee rings for the bell, and Kendrick is the victor by disqualification.

Afterwards, Akira Tozawa makes it to his feet and tries to come to Kendrick’s aid, but Gallagher steamrolls him into the turnbuckle. Gallagher meanwhile grounds Kendrick with a Gulock submission. The “Submission Commission” pose for the cameras to a chorus of boos. Both matches involving these four in some form or fashion have resulted in a disqualification finish. I suspect a stipulation match allowing them to have at it is on the cards in the near future of 205 Live.

Next, footage is shown of Alexander and Ali’s win over Buddy Murphy and Tony Nese. The Cruiserweight Champion is having a sit-down interview with Drake Maverick backstage. Maverick comments on Murphy’s rise from obscurity into having a remarkable 2018. He comments on Murphy making enemies along the way, none more-so than Cedric Alexander, his next challenger. I, Mustafa Ali, and many 205 Live fans would beg to differ on that comment.

As if on queue, Buddy Murphy even agrees that Ali is his tougher opponent. Murphy states that Alexander should thank Ali for the victory last week. He faces the camera and addresses Alexander. The next chapter in this story will see both men face different opponents before their eventual rematch. I appreciate that Murphy is sowing the seeds of contempt between Alexander and Ali. This slow burn story between the Heart and Soul of 205 Live is beginning to gain some traction. Daivari has been on the shelf for several months and made his return to 205 Live this week, aligning with the Purple Brand’s evil: Hideo Itami, of which last week’s footage is shown.

Daivari wastes no time as the bell rings, thrown viscous punches at Roberts in the corner. Daivari has adopted a similar wrestling offense to Itami, who is watching on backstage. This is not the only page that Daivari has taken out of Itami’s playbook. Several Rainmaker Lariats are thrown, and several pinfall attempts are broken up by Daivari himself. The referee calls for the match to stop, so devastated is Roberts from the onslaught. Itami 2.0 wins very convincingly. Itami 1.0 nods in approval backstage.

Mustafa Ali is backstage, talking of his fall from the top and how hard it is to get back up after Survivor Series. Last week was the first step. He’s proud of Alexander’s title opportunity. When it’s Ali’s turn though, he will fight whoever, and he will fight for his life.

Cedric Alexander is up next. He comments on Murphy’s comments earlier. Alexander says he can’t allow Ali to step in his spotlight…..then says he is only joking, laughing off Murphy’s childish mind games. He is looking forward to the match-up with Murphy’s pick of opponent on 205 Live next week. I wonder who that could be….

Noam Dar up next with a selfie video. He has a serious tone tonight. Murphy disrespected him in his match with Tony Nese a few weeks ago. Dar asks if Murphy is man enough to step in the ring with “Supernova 11” at some point in the future. LHP are represented by Kalisto and Lince Dorado this evening. I try with this outfit. I really do. But their embarrassment of my beloved Dash and Dawson on Monday Night Raw for three weeks running has put me off them once and for all. I hope TJP and Mike Kanellis destroy them this evening in this tornado tag match. Hopefully, TJP takes home a few more masks also!

The action breaks down immediately. No flashy submissions here. LHP gain the upper hand as they combine in flashy tandem moves to gain an early dominance over TJP and Kanellis. Dorado takes to the skies from the turnbuckle and floors his opponents with a double Cross-body.

In the ring, and Kalisto wins a cover on TJP with a Tornado DDT. Back outside, Kanellis drives Dorado into the corner stanchion. While LHP looks to bring their usual flare to the match, TJP and Kanellis have nothing but chaos in mind. Maria amplifies this tone by smashing up the many House Party props littering the floor.

Rare for this match so far, TJP wins back favor with some technical prowess over Kalisto, wrenching on his leg with an Indian Deathlock. TJP and Kanellis look to assert their own dominance in the match now, but Dorado counters an Irish Whip into a springboard double Stunner.

Kalisto and TJP are in the ring now, Kalisto tries for a hurricanrana, but TJP grabs the high leg and brings Kalisto down, trying to unmask him while an STF is applied. All the while, Kanellis destroys Dorado with a Russian Leg Sweep onto the floor from the apron. Finally, the villains of this match are in full control. This match is fast becoming one that heightens the reputation of 205 Live.

Kalisto is being double teamed upon. Fighting against the odds is synonymous with the former Cruiserweight Champion however, as he floors TJP with a hurricanrana from the top, whose own momentum careers him into the stationary Kanellis. Dorado hits a Moonsault and goes for the victory, but TJP saves the match for his team.

Kalisto and Dorado are in control again. They mimic the Dudley Boys with some back and forth shoving. Dorado shouts something in Spanish. Kalisto brings a Santa sack into the ring and empties out a bunch of small pinatas. Now we know what “Get The Pinatas!” sounds like in Spanish…

LHP Double-Superplex TJP onto the pinatas, but this time Kanellis breaks up the pin attempt. TJP hits a Powerbomb out of nowhere and gets his own pinfall attempt. TJP asks for a larger pinata to be brought in as a weapon. Kalisto intervenes however and, after a game of Tug of War with Maria, the First Lady of 205 Live falls off the apron onto her husband. Kalisto grabs TJP’s head, vaults the top rope – kicking Mike of the apron mid-revolution, and takes TJP out with a Solido Del Sol.

Dorado follows up with a Shooting Star Press on TJP and LHP win the match emphatically.

This rivalry has probably become LHP’s best, so maniacal and single minded are their foes in TJP, Mike and Maria. I could have done without the smattering of toys around the ring. I really could. However this is to be expected with LHP these days. This was one of the 205 Live main events that will be full of GIFs on social media over the next seven days, which isn’t a bad thing to be fair. My new nemeses in WWE may have won the upper hand tonight. Here’s hoping they get their (most thoroughly deserved) comeuppance at some point in the future!

Afterward, a graphic comes up showing Murphy vs Dar for next week. And Cedric Alexander will face the man who heaped a couple of losses onto Alexander some weeks ago. 205 Live finishes this week with Tony Nese backstage, claiming to know Cedric more than anyone else on 205 Live. Tony Nese has his number. Nese will physically dismantle Alexander in the ring to the point that he will never recover, and we won’t get to see the anticipated rematch between Murphy and Alexander.

Next week promises to have a couple of great matches to add to 205 Live’s catalog!

Check out the latest episode of latest podcast of “The Ricky & Clive Wrestling Show“. Ricky & Clive get together and make some wild predictions for WWE and all its fringe shows in 2019. They debate the potential for them coming true, or if there is no chance (no chance in hell!) of them happening. Before that, Ricky & Clive reminisce about their big night out on the town (!) and review ICW’s big event of the year: Fear & Loathing XI. We finish with a “December in WWE” themed quiz.