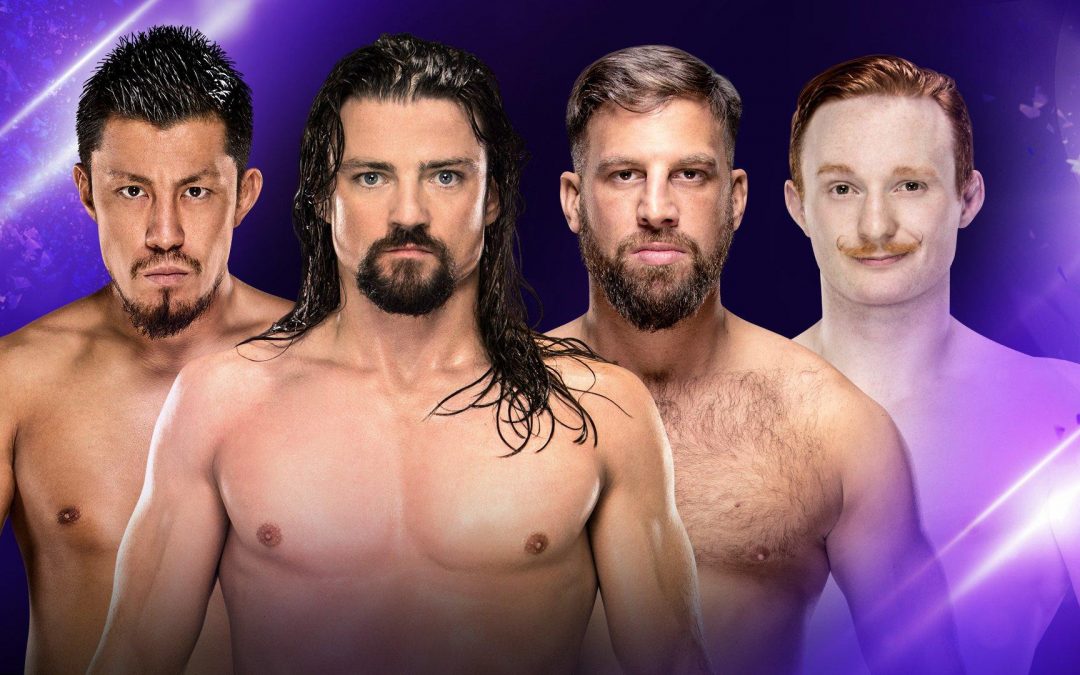 Another successful PPV outing for 205 Live this week with Buddy Murphy successfully retaining the Cruiserweight Championship against Cedric Alexander. Hidden away on the pre-show it may have been, both men still delivered a high octane match that had fans lucky enough to get an early seat voice their appreciation of the match.

More good news for fans of the Cruiserweight Division. Mustafa Ali has officially been added to the Smackdown Live roster, and is already in a high profile spotlight alongside AJ Styles and Daniel Bryan. As of the time of writing, I have no clue as to what this means for Ali on 205 Live, or the show itself, but I’m sure we all hope nothing but success for Mustafa Ali.

Moving onto tonight’s episode, and a rivalry finally comes to its head. Drew Gulak and Jack Gallagher, now known as The Submission Commission (TSC) will battle it out against the long term victims of their crusade for a Better 205 Live: Akira Tozawa and Brian Kendrick. With no match between any of them in any of their guises setting the heather alight to date, here’s hoping that the tag-team street fight environment elevates this feud to the stakes it deserves.

Additionally, Lio Rush returns to 205 Live and will be in action tonight.

After Drake Maverick runs down the above points in a traditional hype video, Vic Joseph, Nigel McGuinness, and Percy Watson introduce us to the action.

Hideo Itami comes to the ring with his new partner, Ariya Daivari to start the show, something the announce team weren’t aware would happen. Daivari has the microphone, and asks the crowd to show Itami the respect he deserves, and to shut their mouths. Daivari can’t sit idly by to see watch the gross mistreatment of Hideo Itami, the most decorated wrestler of 205 Live. Until Itami gets the respect he desrves, Daivari threatens to cancel the show.

Drake Maverick comes out and threatens to suspend the. He is shortly followed by Noam Dar who is dressed to fight. Maverick announces a match right now.

Dar lands some heavy punches early, throwing his weight and Itami around the ring. Itami looks to counter an Irish Whip but a Dar dropkick takes Itami down. Itami spends a lot of his matches in control from the off. Seeing Dar take it to the Japanese legend so fervently is a joy to see.

Itami works his way into the match however, draping Dar over the top rope. Strong kicks to Dar’s chest are followed up with a top turnbuckle legdrop. Dar kicks out at two, but the sudden flurry of offense from Itami sees the Scot on his back legs for the first time in the match. The Supernova has his neck wrenched, and is then thrown to the ground. Itami shrugs off his biceps in disrespectful fashion.

Dar doesn’t take kindly to the disrespect and lashes out, but Itami stops any comeback with more lowly aimed kicks and another rear chin-lock.

Dar turns things around by feigning an incoming crossbody, Itami landing badly on his rear. Dar then stops Itami from scaling the turnbuckle with a punt of Itami’s leg. Dar’s striking game is underrated for me. His forearm clubs to Itami’s face rock his opponent. Dar goes for another sweeping kick, but Itami dodges. Dar avoids Itami’s own violent kick and mounts the top rope, taking out the sitting duck Ariya Daivari in the process.

A back fist counter and basement dropkick unfortunately turn the momentum Itami’s way. Dar put up a valiant fight in this match, but Itami’s variant of the Go To Sleep is all she wrote in this match, as Itami picks up the win.

Daivari and Itami stare down at their victim as Itami’s music plays. Although not yet a fully fledged tag team, this duo could become a formidable force going forward.

Next up, after a reply of the TLC PPV’s closing moments of the Cruiserweight Championship match, Buddy Murphy is backstage with Maverick. Murphy says Mustafa Ali and Cedric Alexander were his two biggest threats in 205 Live, yet Murphy is still the champion after successful defenses against both men.

Murphy wants his next title defense to be a challenge, ensuring nobody can deny he’s the best Cruiserweight Champion in WWE history. Maverick will announce the challenger on next week’s 205 Live.

Lio Rush vs “Man With Red Streak In His Hair”

Lio Rush returns to 205 Live for the first time since his winning streak was snapped by Alexander. He faces enhancement talent this week. Before the match, he takes the microphone, saying he likes to get the crowd hyped up before the match. Tonight though, he’s a busy man. He clocks his opponent with the microphone before the bell rings.

As it does though, Rush receives some punches as punishment. Fear not however, fellow Rush fans. Mere seconds, and almost as many rapid attack moves later, Rush has his opponent proned for a Final Hour frog splash. His nameless (sigh) opponent is done for.

Alexander with a selfie video next, lamenting how close he came to winning the title on Sunday. He tells Buddy to enjoy his win, but Alexander warns that 205 Live is still his division, and he’ll be coming back for his Cruiserweight Championship.

Next up is an announcement that next week’s episode will be a “Best of 205 Live” special episode, looking at the greatest matches and moments of 2018. With that in mind, I will be taking a week off from covering the show, and will be having a well deserved rest to enjoy some Turkey and chocolate. Not necessarily in that order either!

So….an unwritten rule of street fights in WWE is that wrestlers wear their street clothes. It just so happens that Gulak and Gallagher’s street clothes are….well….their usual business clothes. Don’t get me wrong. The sleeves are well and truly rolled up. But I wonder how comfortable they will be.

In a more bizarre turn of events, Akira Tozawa is joined on the ramp by a 2002 version of Brian Kendrick! Shorter hair. Fresh faced. Ladies and gentleman, I think I’ve entered a time machine.

The strange occurrences don’t last long though. Kendrick and Tozawa run the ramp and charge head on into the Submission Commission (TSC). The bell rings and Tozawa and Kendrick are already standing tall. They take the allotted time to bring a table into the ring early doors. TSC attack their opponents though. They aren’t down with a carnage riddled match however, and slide the table back under the ring.

Unbeknownst to them, they turn the corner and come face first with the top roof of the commentary table. Kendrick and Tozawa on the same page is great to see, considering the past they have together.

Tozawa and Kendrick deliver tandem offense to the joy of the crowd. They pause for applause but TSC take advantage. They decide that weapons are fair game now, taking their enemies out with trash cans.

Gulak makes a call back to the No Holds Barred match between he and Tozawa as he puts the trashcan on Tozawa’s head. Gallagher stays with Tozawa as Gulak goes back outside and lays waste to Kendrick with apparent ease and, of course, no mercy. If only there was a PPV that could tie in with that tagline.

Gulak brings more weapons to ringside. A mop and bucket are brought into play, separate parts being used to good effect by TSC. Kendrick fights off Gulak, but the Philadelphia Stretcher wraps his wrists in elastic cords of some description, fish-hooking Kendrick’s mouth with the implement.

Tozawa comes to his partner’s aid with a fish-hook of his own, but Gallagher levels the playing fold. TSC are reforming and refocusing. Tozawa is dumped into the timekeepers area, and Kendrick is preyed on by both men. These divide and conquer tactics are working well for TSC.

Kendrick is fending off multiple attacks and pin attempts as Tozawa is nowhere to be seen. The mop bucket is planted upside down. Kendrick looks like he will be suplexed onto the base, but he reverses this into a match saving double DDT. All four competitors are grounded in what has become a grueling encounter.

Tozawa and Gulak exchange hard fists. But Tozawa uses a live microphone to smash into Tozawa’s head. Tozawa’s adrenaline is running on full now, he fights off the attack and makes his way into the ring to effectively take care of Gallagher. He then throws a chair full force into Gulak on the apron. This time, he has time to soak in the adulation of the crowd.

The tables have turned in this match. Tozawa and Kendrick in control, Gulak is tied round the corner stanchion with the earlier used bungee cord. Tozawa and Kedrick rain subsequent chest chops down on Gulak, but Gallagher intervenes with a trashcan, allowing Gulak time to free himself from the elastic shackles.

Tozawa is put in a swivel chair. Gulak starts pushing, and the forward moving Tozawa eats a Gallagher dropkick. Fantastic use of the environment! Not the first time that the furniture has been used to great effect and aesthetics in 205 Live. The chair comes into use again as Kendrick reverses momentum with a scoop slam of Gulak onto Gallagher who was arrogantl sprawled in the chair.

Back in the ring, and Tozawa tries to counter Gallagher’s Indian Deathlock of Kendrick with an octopus. But the former champion is pulled into Gulak’s dragon sleeper. The action is thick and fast in this match. It’s quickly becoming a classic for the show!

Gallagher has Kendrick in another Indian Deathlock near the turnbuckle. Tozawa is off screen and we don’t see his top rope senton onto Gallagher till the last minute. Gulak breaks up the pin attempt.

Tozawa is in control and looks to hit Gulak outside with a suicide headbutt, but instead he goes full force into a proffered trashcan. The force of the impact lays out Gulak also.

Back in the ring, Kendrick, who has soaked up untold amounts of abuse in this match, somehow reverses a Gallagher top rope back suplex attempt into a Sliced Bread 2.0. Out of nowhere, Kendrick pins Gallagher for the one, two three.

Well! The tone at the start of the match was odd, taking into account the odd choices of attire. However, the action became violent very quickly. A fantastic match for 205 Live to add to its back catalog, one I hope people will remember more for the action that for a clean-shaven Brian Kendrick!

Check out the latest episode of latest podcast of “The Ricky & Clive Wrestling Show“. This week’s episode sees Ricky & Clive look back at the highs and lows of this year’s Tables, Ladders, & Chairs PPV. Thankfully, there were a lot more positives this time compared to negatives in our humble opinion. The biggest takeaway from the weekend is surely the white hot and many possible angles that the women of WWE have going into what could be their Wrestlemania. We look at the TV also, specifically Vince McMahon’s appearance, and finish with an “acronym of wrestlers’ names” quiz.