Latta’s Lariat #18 : The Raw And Smackdown Tag Team Title Matches Will Save SummerSlam 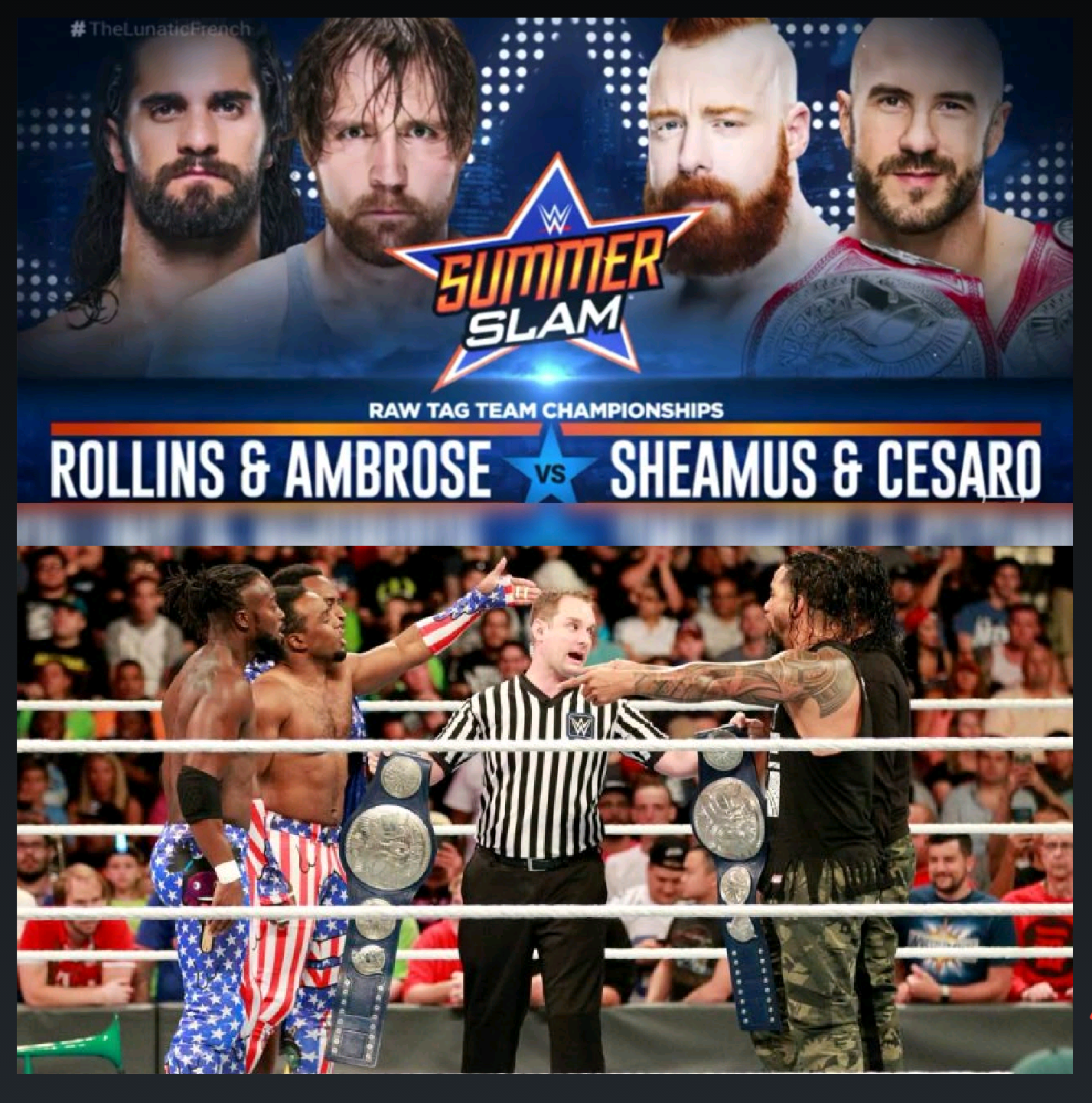 I’m not overly thrilled about Summerslam this year. It’s going to be a really long show with plenty of eyebrow raising matches booked between guys that would probably be better off wrestling someone else. John Cena got booked with Baron Corbin for some odd reason, AJ Styles once again has been handcuffed to Shane McMahon at a Big 4 show, in a Kevin Owens feud that has under produced.  Finn Balor is wrestling Bray “we’ve seen your movies” Wyatt, and Shinsuke Nakamura is wrestling one of the most generic WWE champions of all-time.

Seems like these cross matches are becoming a theme in WWE, but I’m willing to bet the main event will be incredible. However, a great main event cannot save a potential blah show that is set to be four hours long.

Enter the Tag Team Championship matches on both shows.

The New Day vs The Usos.

WWE’s two premier tag teams of this decade have been locked in one of the best feuds to come out of the tag division in ages. The alignment has finally lined up to make The Usos heels that are incredible on the microphone and in the ring, and The New Day have finally found a team to push them as faces where they could not coast on their superior showmanship. They’ve already had two good efforts on PPV, in addition to one of WWE’s greatest segments I’ve ever seen with their Rap Battle hosted by Wale. If Vince McMahon cares to showcase these guys, they are in a position to flat out steal the show.

These teams have their legacies behind them, and they are each among the most well-defined characters in WWE beyond the tag team division. Essentially, The Usos turning heel made their eventual feud with The New Day the perfect storm in tag team wrestling. Midnight vs Rock N Roll, Edge & Christian vs The Hardys, The Rockers vs The Brain Busters, and now The Usos have found their true all-time dance partner in The New Day. I hope we see these dudes as old men at the hall of fame gushing about the greatness of the other team. Is everyone ready for old man Big E to gyrate at 60 years old? Will Kofi’s dreads be grey?

If you tell Cesaro to get over in a tag team, he will. If you tell him hey, we need a main event match with Reigns on Raw, he can do it, and if you tell him, “Hey, Sheamus’ career is in the toilet, we need you to save him,” of course he could do that too. These guys have gelled into like an evolutionary version of the early 90’s Steiner brothers, with Cesaro being every bit the freak young Scotty was, and Sheamus being a big bruiser like Rick. What was an odd ball team actually worked.

They’ve played their role of being the foils to the evolving pairing of former Shield brothers, Seth Rollins and Dean Ambrose who have come together over the summer once more this time because both essentially had no prospects elsewhere in kayfabe and reality. The elephant in the room of Seth Rollins heel turn was that he never made things right with both members of The Shield. In a perfect world, his match with Triple H would have come after he made up with the guys he crossed, but the calendar dictated otherwise.

The story between these men has been ate up every step of the way with each tease of their fists touching building until the moment on Raw where they finally aligned. Faced with the prospect of winning the championships together, and a tough together team, Rollins and Ambrose will have to break their own shields to channel the old one.

For all the non-appetizing matchups that look to be on the table, I’m counting on these teams saving the show. As long as they both make the main card, I expect to see some of the best tag team wrestling of this century in WWE in these two matches. Heavy expectations? Well yes, Cesaro is grouped with 3 former World Champions and the two best real teams of the decade are in what should be their ultimate showdown. Let me get excited about something.

It seemed like tag teams got broken up regularly for a stretch of time in WWE. Luckily we got an old one back and they didn’t touch the other three. They have some heavy lifting to do. They’ll be just fine.