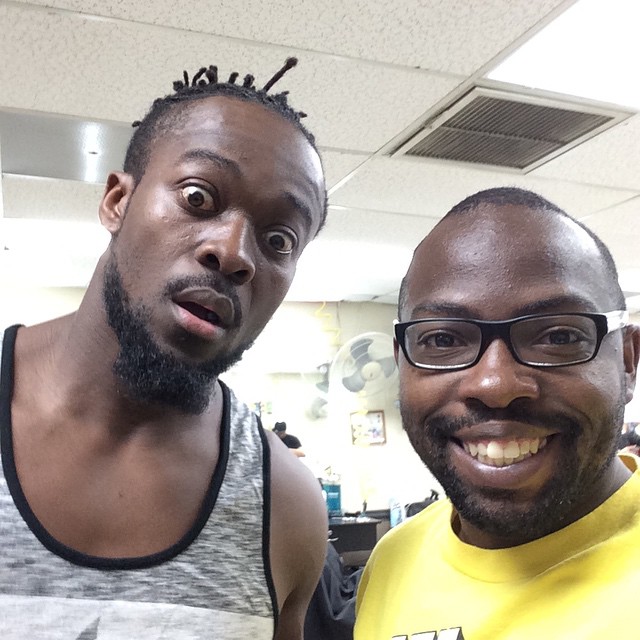 BOOM! BOOM! BOOM! Kofi Kingston is one the most athletic and entertaining WWE superstars. I’ve been a fan of the Ghana native since his days down in Tampa at Florida Championship Wrestling. Last weekend I ran into Kofi at Fademasters Barbershop in Tampa. He was very nice and didn’t seem bothered when I asked for a picture. In honor of meeting Kofi, I’m highlighting his five best matches. You’ll notice I excluded Money In The Bank Ladder matches as well as Royal Rumble matches. Kofi has had breathtaking moments in those matches, but they don’t qualify for my list. I’m basing this list strictly off one on one matches. Without further adieu, here are the 5 best Kofi Kingston matches (so far):

Kofi Kingston made his WWE debut on January 22, 2008 for the ECW brand. Kofi picked up several victories in his first couple months. In April of that year Kofi took part in his first major feud with the Gold Standard Shelton Benjamin. Benjamin was upset this newcomer was going more attention than him and planned to make an example out of Kofi. Things didn’t go too smoothly for Benjamin. Kofi picked up two victories in their first encounters. Benjamin finally scored a win in their third bout. This set the stage for the final match between the two under Extreme Rules. This was a hard hitting battle which displayed the athleticism of both men. The only thing that ruined this match was Mike Adamle’s commentary. 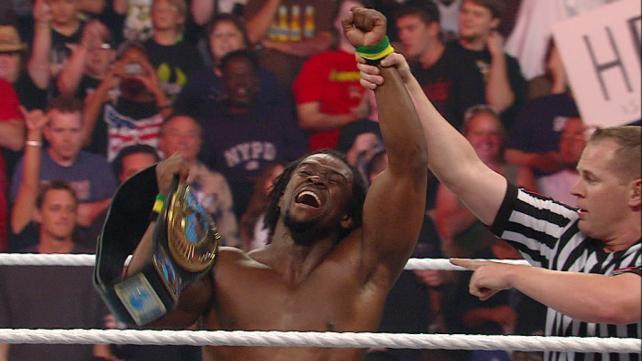 After a short stint on the ECW brand Kofi was drafted to Raw. Kofi challenged Chris Jericho for the Intercontinental Championship at the Night of Champions pay-per-view. This was a battle of the future meeting the present. The match was fast paced and reminded me of several of Jericho’s Cruiserweight matches from WCW. Thanks to some help from Shawn Michaels, Kofi pulled out the victory and won his first of many titles.

Kofi Kingston won a triple threat match to become the number one contender for MVP’s United States Championship. MVP used his size and technical background to control the match and keep the high flyer grounded. Everytime Kofi started building momentum he was cut off by the aggressive champion. As the match goes on it looked like MVP was going to be walking away, his U.S. title, but, after a series of reversals Kofi catches MVP off guard and captures the United States title.

This was not the first encounter between Kofi and Dolph Ziggler, but it was the best. This match wasn’t about titles or contenderships. This was a match with both men’s pride on the line. Both men were wrestling like they were in the main event of Wrestlemania. They captured the attention of the audience with unique moves and reversals. Every near fall was dramatic and had you at the edge of your seats. Kofi didn’t win this one, but he showed greatness in defeat.

On the May 7th Smackdown, Drew McIntyre was suspended and stripped of the Intercontinental title. This set the stage for a tournament to determine the new Intercontinental Champion. Kofi and Christian advanced to the finals. This match up between these two fan favorites is Kofi’s best match to date. Kofi and Christian treated this title match like it was a WWE title match and left all it in the ring. It reminded of me a state level amateur wrestling match, with both men constantly trying to get the advantage. Both men incorporated their high flying style along with technical wrestling that involved several counters. The match was pretty even throughout. This epic battle came to an end with Trouble In Paradise out of nowhere.

What is your favorite Kofi Kingston match? Sound off in the comments below.