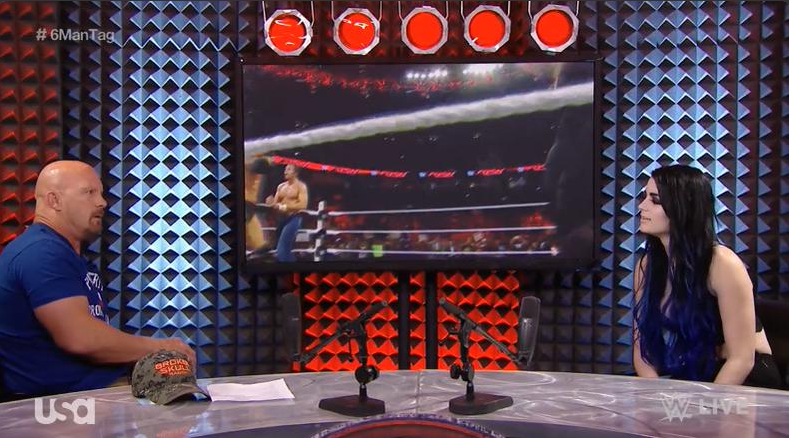 After Monday’s Raw Paige was interviewed by Stone Cold Steve Austin on a Live Stone Cold Podcast on the WWE Network. Here are 5 takeaways from the interview.

If you’re not a hardcore wrestling fan you might not have known that despite being 23 Paige has been in the wrestling business for 10 years. Paige comes from the infamous wrestling Knight Family in England.  During the interview, Paige talks about how her family has been in the business and her father has his own company and training school. Her mother was blinded for 6 months after taking a dropkick one time. She tells a story about getting knocked out in her first match and wanted to do it forever from that moment on. She talks about training with her whole family. She says even in the matches she had with her family, they did not hold back on her and went at her even harder. She says she’s been taking bumps since she was a fetus.

2. Paige was a Bartender and Bouncer

Things are definitely different across the pond. At the age of 14 Paige was bartending and believe it or not she was also a bouncer. She told several stories of having to get physical with customers in the bar.

Austin asks about failing at her first WWE tryout. Paige says tried to be a “Diva”. She says she still can’t brush her hair properly. She got a spray tan, her hair done and a colorful dress and says she did not feel confident. She says she was so nervous she busted the other girl’s lip in the tryout, Lisa Fury. She knew WWE could tell she wasn’t being herself. John Laurinaitis got another tryout for her 6 months later and she came back as the Paige we all know and love.

Paige says the whole Divas Revolution really was started by Triple H in NXT.  She talks about how surprised they were when Triple H gave she and Emma 20 minutes at the first NXT special. She says he started it, but her and Emma got the ball rolling. She says they opened the door for other Divas like Charlotte and Bayley, but she gives huge props to trainer Sara Del Rey. She also gives props to Finlay and Dean Malenko, who she goes to a lot these days.

What were your thoughts on this Stone Cold Podcast? Sound off in the comments below.