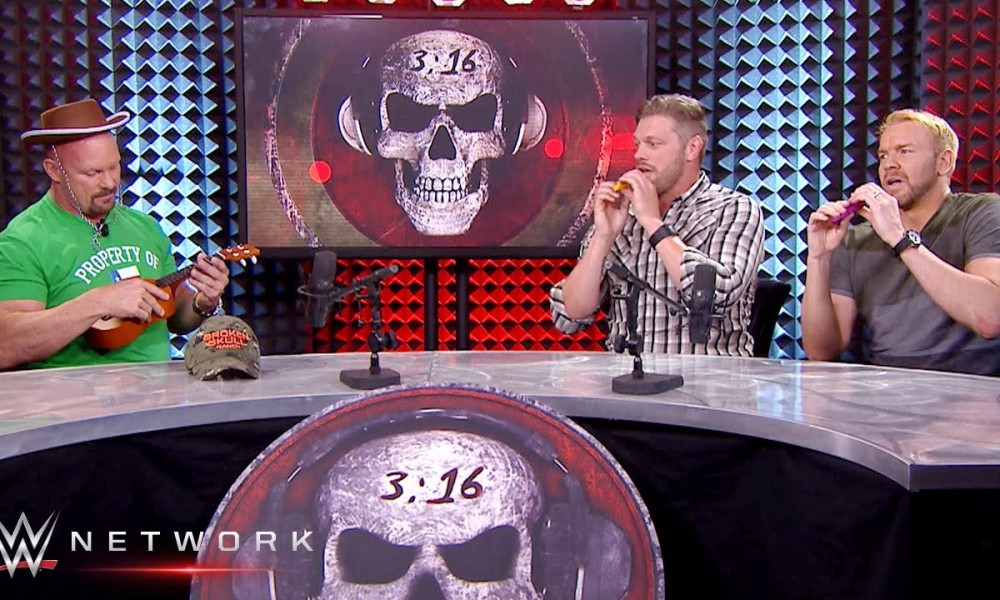 After the September 7th episode of Monday Night Raw Edge and Christian were interviewed by Stone Cold Steve Austin on a Live Stone Cold Podcast on the WWE Network. Here are 6 takeaways from the interview.

Since Christian suffered his last concussion back in March of 2014, his status with WWE has been up the air. Although there hasn’t been had a formal send off, there have been subtle signs that Christian is done with in-ring competition. Stone Cold asks Edge & Christian how they transitioned from the daily WWE grind to normal life. Christian says it’s been a little bit of a culture shock to decompress from that because you don’t know what to do with yourself. He says he was always getting in his wife’s way but found ways to get busy. With that answer, it seems confirmed that Christian has wrestled his last match.

Stone Cold says he has a “serious” question and asks if they will play his theme song on the kazoo, They agree, but they want Austin to play tunes on the ukulele. This was one of the best parts of the podcast. All three of these guys are still very entertaining.

Stone Cold asks Edge & Christian about their thoughts on the current tag team division. They all are happy for the return of The Dudleyz and agree this is their home. Austin talks about how the tag scene was flat for some time and says it pissed him off because he’s a fan of tag team wrestling. They talk about some of the science of tag team matches and says The Dudleyz coming back will be influential to remind other guys of some of the little things that make tag matches. He says it’s important they have proper tag teams now. Christian gives props to Luke Harper while Edge gives huge props to “The Mechanics” Dash Wilder and Scott Dawson of NXT.

Stone Cold asks Edge what Christian’s favorite match is and he says Randy Orton at SummerSlam. Christian says that’s wrong, his favorite is the ladder match against Del Rio where he won the World Heavyweight Title (I love that match!). Christian thinks Edge’s favorite is his WrestleMania match with The Undertaker. Edge agrees and says he felt validated by Taker, the company and the fans with that match.

Stone Cold shows TLC highlights and they talk about some of those matches. Christian talks about how after the first few, they tried to insert psychology so it wasn’t just a trainwreck. Edge says TLC was always going to be a “tornado in a trailer park” but they realized they had to top what they had done already. He says the matches were getting tougher on them. Christian believes the reward they got from TLC matches was worth it. Austin asks how they felt the next day and they both say sore. Christian tried to go to the gym the day after the first TLC match, but his was just in pain. He had a hole in his arm from a ladder screw. Edge says the following day was worse.

6. Thoughts On The Hall of Fame

Stone Cold asks how Edge felt going into the WWE Hall of Fame. He was surprised because it was just a year after retiring, but he wasn’t going to say no. He got calls from Shawn Michaels and Bret Hart saying he deserved it. Christian was happy for him and felt he deserved it more than anyone. Austin asks Christian if he thinks WWE should induct him into the Hall. Christian says that’s not his place to say, but Edge says he should be and says he has to be inducted. Edge adds that he’s starting a petition right now. They agree that Michael “PS” Hayes and The Fabulous Freebirds should also be inducted.

What were your thoughts on this Stone Cold Podcast? Sound off in the comments below.