AEW Double Or Nothing 2020 Preview and Predictions 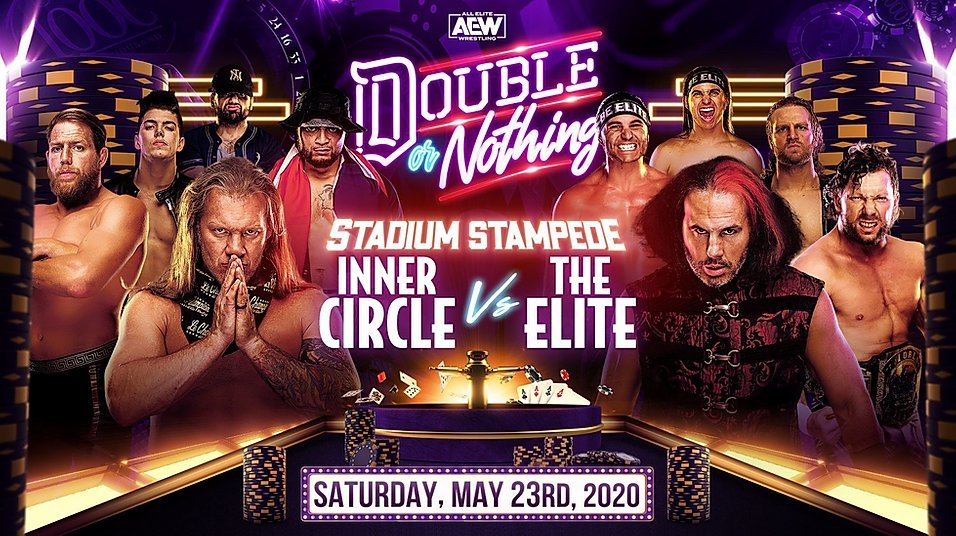 Muzza is back and still around. I’m here to do a preview of Double Or Nothing since there has been no New Japan (please come back soon. I miss you.) so here is my first-ever AEW Preview.

The pre-show match has Private Party taking on Best Friends with the winners earning number one contendership to the tag titles (currently held by Kenny Omega and Hangman Page). Both teams have been on winning ways. Private Party has picked up a lot of wins on AEW Dark, while Best Friends have wins over Jurrasic Express, Havoc and Sabian and Omega and Nakazawa. With a future tag title match on the line, this may be a low key banger. Both are solid teams with a point to prove.

This is a last-minute addition to the card. Spears has recently been talking shit about all members of the Rhodes family (mostly Cody). On this week’s Dynamite he debuted the Shawn Spears News segment where he talked shit about Dustin and challenged him to a match. Dustin has not been seen since he got beat viciously by Archer. Leaving me to wonder what condition he is in, but you talk shit to Dustin expect a fight. This match while a little build should be fun enough.

This match is most likely not happening. On the last Dynamite Britt Baker seemed to suffer a leg injury in a tag match featuring Nyla Rose, Kris Statlander, and Hikaru Shida. The build had these two having some smoke during a 4-way featuring Shida and Penelope Ford. Now if this match just gets canceled or if someone replaces Britt is still up in the air. As of this writing (Friday Evening GMT), no word has been said.

Prediction: if anyone replaces Britt then Statlander wins

Up next, we have a match that features two of AEW’s brightest young talent’s face-off. MJF has a huge wave of momentum following his victory over Cody at Revolution. Despite an” injury” keeping him out for a while, has continued to be a major presence. Meanwhile, his opponent Jungle Boy has been slowly racking up wins in the tag division, it was confirmed 3 weeks ago on Dynamite this match was going to happen much to MJF’s dismay. These two did have a singles match on Dynamite which I really enjoyed and with it on the big stage, I’m sure it will be even better.

Replacing the Casino Battle Royal this year is the Casino ladder match. 8 of the 9 participants have been announced with the 9th being a mystery entrant. Many people are speculating several names including Brian Cage, Jeff Cobb. and Drew Gulak. My pick is the former Zack Ryder. As for the favorites to win, the mystery participant is one with Rey Fenix, Orange Cassidy, and Darby Allin.

The first of three title matches is Hikaru Shida getting her first singles match chance at becoming AEW Women’s champion. In her way is the destructive Nyla Rose who has been on the warpath for a while no. Their last meeting saw Nyla pin Shida in a tag match. Afterward Shida put Nyla through a table leading to this match becoming No DQ. I expect a wild, chaotic, and fun brawl and many weapons to be used (most likely the kendo stick).

AEW TNT Championship: Cody vs Lance Archer (Mike Tyson will present the belt to the winner)

The second title match of the night and one of the bigger stories is Cody facing Lance Archer. This looks to be just a tournament final but more has come out of it. Archer debuted wanting a match with Cody. During his match with Dustin in the semi-finals, he viciously attacked him. Things got more personal when Jake Roberts placed his snake on top of unconscious Brandi. This lead to a massive brawl last week (along with Cody looking bad in a pickup driving it into the arena). This match will be very personal and physical but can Cody who has been 0-2 in the last two PPV’s pick up a belt that he badly needs or will Archer make sure he kills Cody’s momentum?

The final title match sees the AEW World title on the line as Jon Moxley defends against the leader of The Dark Order Brodie Lee. This match is on a relatively short build with three weeks ago Brodie Lee and his creepers attacking Moxley after his match with Frankie Kazarian. Lee ended up challenging Moxley who accepted. Lee would end up taking the title from Moxley, who in return this week broke the arm of 10 (Preston Vance). These two have a long history in WWE feuding as part of The Wyatt Family vs Shield and their Extreme Rules match at Extreme Rules, so expect a hard-hitting affair.

The main event is a feud that has pretty much been going on since the start of Dynamite. The Inner Circle debuted on episode one of Dynamite and since then have pretty much been feuding with The Elite. The feud got an interesting addition (or Broken if you will) with the debut of Matt Hardy. This match was originally going to happen at Blood and Guts in a War Games style match but was canceled due to the pandemic. With the pandemic Hangman was off TV for a while and Nick Jackson was out with an injury. Omega and Hardy held the boat down with tag matches against Le Sex Gods (what a name) and PNP (in losing and winning efforts). After a Matt Hardy singles victory over Sammy Guevara, a huge brawl began and saw the returns of the Bucks and the drunken cowboy himself Hangman. Despite this Hangman still walked off (most likely to the nearest bar). Is their still tension in The Elite and can it cost them the match? Or will they finally sort it out on the big stage?

That’s my preview for Double or Nothing. Hope you enjoy and until next time…