AEW Fight For The Fallen Preview 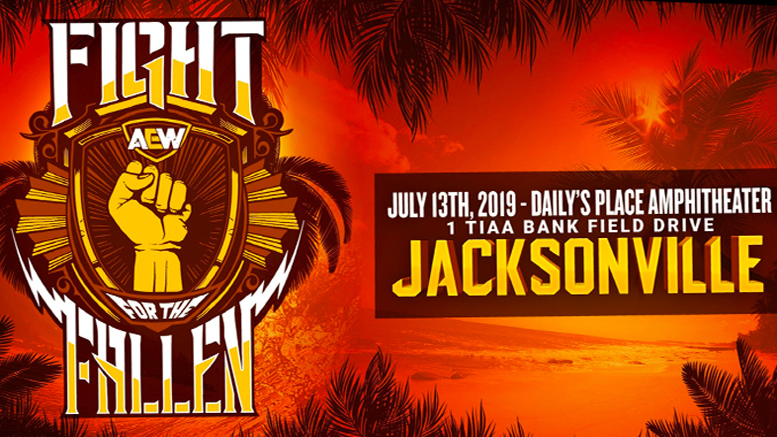 All Elite Wrestling returns this Saturday with its third event.

Fight For The Fallen will take place live from Daily’s Place Amphitheater in Jacksonville, FL, the home of AEW. The event is appropriately named as all proceeds will benefit victims of gun violence via Jacksonville’s Victim Assistance Advisory Council.

Fans in the United States and Canada can watch the “Buy In” preshow beginning at 7:30EST as well as Fight For The Fallen starting at 8:30 free of charge on B/R Live. Worldwide, fans can order the event through Fite TV for around $10.

Several matches have been announced for the event. The preshow will feature a 6-man tag team match featuring Darby Allin, Joey Janela and Jimmy Havoc facing off against MJF, Shawn Spears and Sammy Guevara. There is no doubt this match will be an explosive start to the show, but one has to wonder how well MJF and Shawn Spears will work together on the same team.

As seen on The Elite’s YouTube series “Being The Elite” as well as the “Road to” series featured on the Nightmare Family YouTube channel, it is well documented that these two men do not like each other. Will they be able to set their differences aside on Saturday night?

On the main show, Chief Brand Officer Brandi Rhodes will compete in her first ever match with AEW when she takes on Allie and the stakes couldn’t be higher for Brandi. On last week’s episode of Road to Fight for The Fallen, Brandi opened up about her past struggles when going into a big competition. Brandi spent several years of her earlier life as a figure skater.

She had the ability to take that talent to another level, but “mentally took herself” out of the game. Past demons haunt Brandi and this Saturday is her chance to prove to herself that she belongs in the wrestling ring and that all of her hard work has paid off. It will be no easy feat, however. Allie has been wrestling since 2005. She’s competed all over the world in several notable companies including Shimmer, Shine and Impact Wrestling.

Additionally, there will be a huge first-time match on Saturday featuring Kenny Omega taking on CIMA. Omega is widely known as one of the best wrestlers in the world today, however, fans not already familiar with CIMA have had the opportunity at the last two AEW events to see just how good he is as well. CIMA is a 22-year veteran, most known for his work in Dragon Gate where he held every title within the company. He now competes for and is the president of Oriental Wrestling Entertainment (OWE) and signed to AEW thanks to the partnership between OWE and All Elite Wrestling. Despite Kenny spending more than a decade in Japan, these two men have never squared off, but that all changes at Fight For The Fallen.

SCU vs. The Lucha Bros

Tag team wrestling is something that will be held in high regard in AEW and the most recent match announced to take place at Fight For The Fallen will showcase just that when SoCal Uncensored (SCU) takes on the Lucha Brothers. Over the past several months, the Lucha Brothers have been feuding with The Young Bucks over who was the best tag team in the world, however, SCU feels as though they should be included in this debate and they’ll have the chance to prove it this Saturday.

In singles action, Hangman Page will take on Kip Sabian. Next month at the All Out pay per view Page will take on Chris Jericho in a match to crown the very first AEW World Champion, but before that, he must face Sabian. A loss for Page would certainly hurt his momentum going into his title match on August 31st, however, a win for Kip Sabian would catapult him straight to the top perhaps setting himself up for a future title opportunity.

While not booked for a match, Chris Jericho will also be appearing at Fight For The Fallen. It’s no secret that since Double Or Nothing, Jericho has been waiting for his thank you from AEW. According to him, he is the sole reason for AEW’s success thus far. There is no telling what will come out of Chris Jericho’s mouth Saturday night when he has a live mic in his hand.

The Young Bucks vs. Cody and Dustin Rhodes

The most anticipated match taking place Saturday is being described as a tag team dream match and rightfully so. Following their emotional war at Double Or Nothing, Cody stood across the ring from his brother, Dustin, both of them covered in Dustin’s blood as Cody informed his older brother that he had signed a contract for a match at Fight For The Fallen which would be a tag team match where Cody and a partner of his choosing would take on The Young Bucks.

Cody continued, “I don’t need a partner. I don’t need a friend. I need my older brother.” The Rhodes brothers embraced in the middle of the ring and the match was set. Over the last couple of weeks, Matt and Nick have had fun at the Rhodes Brothers’ expense mocking them and their moment following the match at Double Or Nothing. On Saturday, it’ll be interesting to see just how personal things get when the two sets of brothers face off in a match fans never thought they would see.

It all takes place this Saturday, July 13th beginning at 7:30EST with the “Buy In” pre-show followed immediately by Fight For The Fallen on B/R Live and Fite TV.