AEW Fight For The Fallen Review 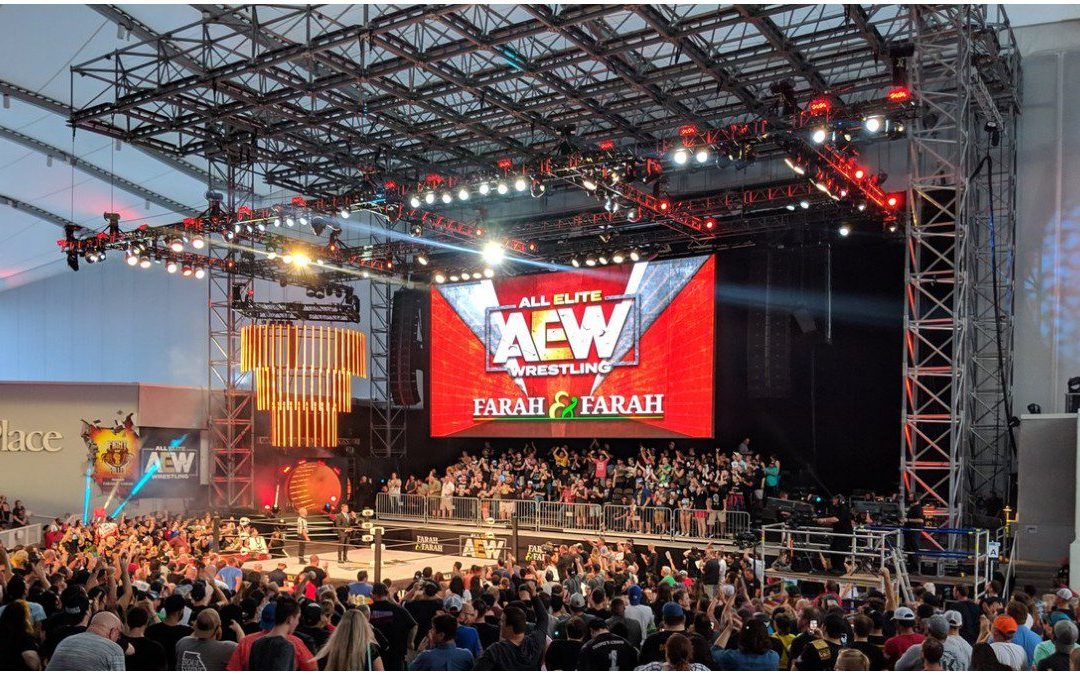 The Buy In preceded the event. Two action pack matches got the crowd fired up before the main card began.

The Librarians made their way to the ring first. This time it was Peter Avalon in action with Leva Bates accompanying him. Avalon would take on Sonny Kiss who made a grand entrance being joined by the Jacksonville Roar. It was a fun way to kick things off seeing Sonny showcase his dance moves along with the Jaguars cheerleading squad. The fans were solidly behind Kiss who was victorious. Sonny is a truly special performer with so much charisma. It was refreshing to hear such an ovation for him.

The second match on the pre-show saw Dr. Britt Baker teaming with Riho taking on the debuting duo of Bea Priestley and Shoko Nakajima. The fans have been anticipating Priestley’s first AEW appearance since it was announced several months ago that she signed with the company. Last night proved that she was well worth the wait. The tag team match further demonstrated that AEW will have a top-notch women’s division. All four ladies were exceptional. Shoko Nakajima at just 4’11”, was a joy to watch. Small, but mighty. The mix of styles between the four competitors made for a great match seeing Nakajima picking up the win via pinfall on Riho.

The main show kicked off with 6-man tag team action. The team of MJF, Shawn Spears and Sammy Guevara faced off against the team of Darby Allin, Joey Janela, and Jimmy Havoc. With Sammy Guevara’s high-flying skills, the quickness of Allin, the unpredictable nature of Janela and Havoc and the uncertain relationship between MJF and Spears, this match was a great way to kick off the main card.

All six men kept the fans on the edge of their seats from beginning to end, but it was “The Chairman” of AEW, Shawn Spears, who picked up the win pinning Darby Allin, something Cody was unable to do just a couple of weeks prior at Fyter Fest. It would be shocking if Spears doesn’t remind us of this for the days and weeks to come.

Up next was the AEW in-ring debut of Chief Brand Officer, Brandi Rhodes. Brandi was set to take on Allie, but before the match could start, Awesome Kong’s music surprised the crowd and the legendary wrestler made her way to ringside clearly there to back Rhodes during the match. It looks as though we have a long-term partnership between Rhodes and Kong as the veteran provided an intimidating distraction allowing Brandi a clear advantage throughout the match which ultimately assisted in her victory over Allie.

Brandi deserves most of the credit, however. While Kong may have played a role, Brandi has clearly been putting in the work. She’s never looked better in the ring and held her own against Allie who is a veteran in her own right. Following the match, Aja Kong confronted Awesome Kong perhaps setting something up for a future match between the two monstrous women.

Six-man tag team action followed. The Dark Order faced off against the teams of Angelico and Jack Evans as well as Luchasaurus and Jungle Boy being accompanied by Marko Stunt. A boy and his dinosaur, Jungle Boy and Luchasaurus, were the clear fan favorites, but despite the overwhelming love and support from the AEW faithful and even interference from Marko Stunt, it was The Dark Order who came out victorious last night giving them an advantage on the road to crowning the first-ever AEW Tag Team Champions. All three teams in this match showcased incredible and unique double team work. Tag team wrestling is a huge focus in AEW and this match was definitely proof of the variety fans can expect in this division.

Up next, fans were treated to one-on-one action between Adam “Hangman” Page and “Superbad” Kip Sabian. Kip Sabian has a bright future in AEW. He has a great look, charisma and the talent making him an athlete with many good things to come, but last night just wasn’t his night. Hangman simply has too much momentum going into All Out in Chicago next month where he will face Chris Jericho to crown the very first AEW Champion.

After a ton of back and forth action, Hangman Page pinned Sabian to pick up the win. Following the match, Chris Jericho, disguised as a member of The Dark Order, brutally attacked Page leaving him bloody and bruised after a vicious Judas Effect.

SCU members Scorpio Sky and Frankie Kazarian being accompanied by Christopher Daniels took on Fenix and Pentagon Jr in tag team action next. Two of the best teams in the world today battled it out, but The Lucha Bros were just too much for SoCal Uncensored on this night. The AAA Tag Team Champions picked up the win. Following the match, the brothers brought a ladder into the ring attacking SCU.

With all three members of their opponents laid out, Fenix and Pentagon Jr climbed the ladder with mics in hand proceeding to challenge The Young Bucks to a ladder match at All Out next month. Fans erupted both in person and online at this challenge. Assuming the Young Bucks accept, this match could easily steal the show in Chicago.

The second to last match of the night was a true dream match. For the first time ever, CIMA faced off against Kenny Omega. Kenny has deep roots in Japan, but somehow these two men had never faced off until last night. The match was well worth the wait. It was a true war between the two men. CIMA hit Omega with his signature METEORA multiple times, but it still wasn’t enough to put down The Cleaner. Kenny picked up the win in a hard-fought war after hitting the One-Winged Angel.

Before the main event, Chris Jericho once again made his way to the ring this time with a live mic as promised. Jericho bragged about still having “The Hangman’s” blood on his hands. He made fun of Jacksonville for a few minutes before saying one by one, he would run through the entire AEW roster. He said he would prove that Hangman is nothing more than a “little bitch” and that prompted Page to run to the ring. Hangman attacked Jericho. It took referees and members of the roster to separate the two men. Things are heating up between these two heading into their title match at All Out.

The Young Bucks vs. Cody and Dustin Rhodes

Another dream match closed out the show. Reuniting for the first time since 2015, The Rhodes Brothers, Cody and Dustin Rhodes teamed up to take on Matt and Nick Jackson. It was brothers versus brothers in a highly anticipated tag team match that did not disappoint. It was a true delight to see Cody and Dustin together again.

Their old school style mixed with The Young Bucks’ fast-paced west coast high flying technique was such a beautiful contrast making for a back and forth match that despite a long and hot evening in Jacksonville, kept the fans at the edge of their seats. The Brotherhood thrilled the fans with some classic offense, but at the end of the day, The Young Bucks proved why they’re known as arguably the best tag team in the world when they defeated the Rhodes after delivering the Meltzer Driver to Cody.

Following the main event, the owner of All Elite Wrestling, Shahid Kahn came to the ring along with Kenny Omega, Brandi Rhodes, Jungle Boy, and Luchasaurus to join The Rhodes Brothers and the Jacksons to present a check for $150,000 to Jacksonville’s Victim Assistance Advisory Council. All profits from the event were donated to victims of gun violence in Jacksonville. Cody announced to the crowd that the funds would go directly to people affected by gun violence.

Fight For The Fallen was an excellent event start to finish. With its third show now in the books, AEW is proving that they have something incredibly special going on. Cody often refers to it as a revolution because it truly is one. It’s a movement. The next event will be the biggest one yet. All Out will take place Saturday, August 31st live from the Sears Centre Arena in the suburbs of Chicago. The event will be headlined by the first-ever AEW World Title match between Chris Jericho and Adam “Hangman” Page.