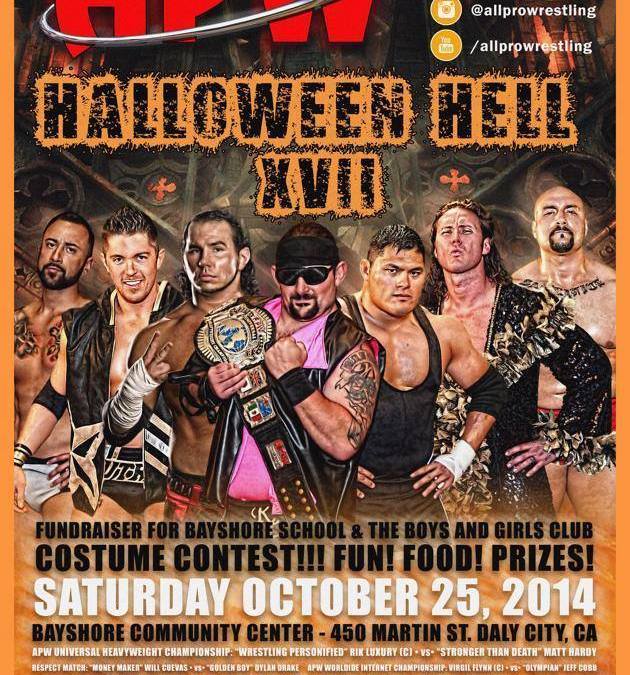 This weekend was All Pro Wrestling’s 17th Annual Halloween Hell! For those unacquainted with APW, it is California’s longest running Independent Wrestling promotion. Founded in 1991 in Hayward, Ca by the late Roland Alexander, All Pro Wrestling and its APW Boot Camp were both featured in the critically acclaimed 1999 Documentary Beyond The Mat. An entire post could be written about the rich history of APW and the many prolific performers from the past and present that have passed through the ropes of an APW ring—and no doubt one day will be—but for today we focus on Halloween Hell! The event took place at the Bayshore Community Center in Daly City California, in the San Francisco Bay Area and in the shadow if the historic Cow Palace. 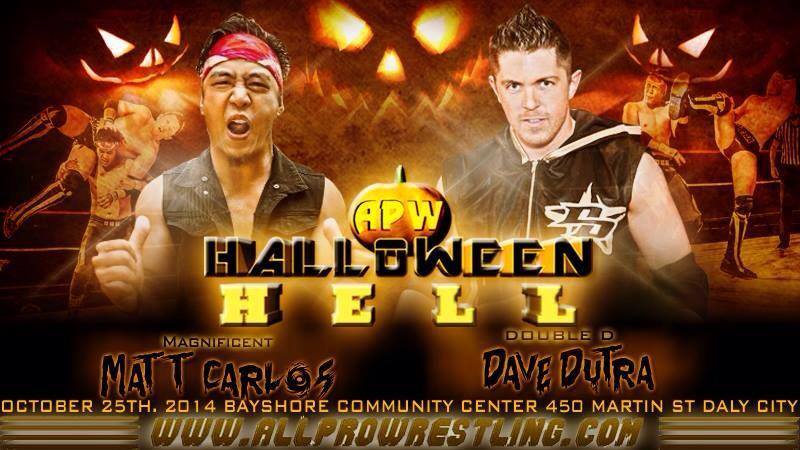 To give a bit of background, these men came up together in the APW Boot Camp and rose in the ranks of APW. They formed an alliance early on in their young careers and on many occasions performed together as a Tag Team even within the last year when both were members of the villainous stable “Pink Mink Inc.” of which Carlos is still a part (the faction includes members: Matt Carlos, Julio Pedroza, Rik Luxury, an associate, Vinnie Massaro, is led by manager Markus Mac, and is featured going forward in the night). Going into this grudge match these men both held one clean win over the other, had one match with a double pin-fall, and another that went to a time-limit draw. This was a solid fast-paced match and the perfect match to kick-off the night with great spots in and outside of the ring. With a “Double DT” Dutra picked up the win and settled the score! 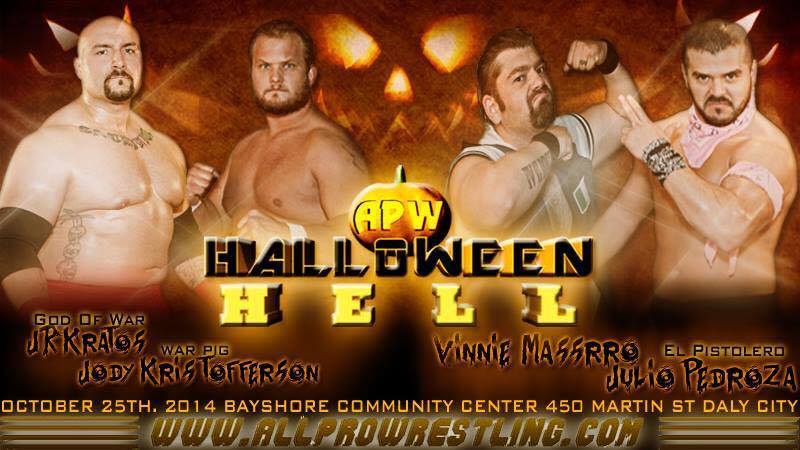 This tag match featured JR Kratos who has in the past year held his own and picked up his share of wins against WWE alumni Matt Striker and Brodus Clay; Kratos teamed up with Jody Kristofferson. Kristofferson, an APW Boot Camp graduate, is the son of musician and actor Kris Kristofferson, and for a time was part of the WWE Performance Center where he wrestled as Garrett Dylan. They faced Pink Mink Inc. member Julio Pedroza and PMI associate Vinnie Massaro. While Massaro doled out a heaping helping of elbow shots even though he was not the legal man, Kratos and Pedroza came out on top! Following the match there was a scuffle between Kratos and a few audience members that resulted in some rail jumping fans. As it turns out these men were Kevin Michael Johnson, and the tag team PB&J (Pretty, Black, and Jakked) Will Rood and Damien Grundy led by manager Caesar Black. And they have a vendetta against All Pro Wrestling.

LeGrande has been a staple in APW and in Northern-California wrestling for the better part of the last couple decades! Member of the group Westside Playaz, LeGrande actually won the Tag Team Championship with former ECW Superstar Mustafa Saeed at last year’s Halloween Hell. Since losing the titles early this year, LeGrande has garnered a bit of bitterness as—though he has won the APW Universal Heavyweight Title—he has never won the prestigious APW World Wide Internet Championship, a title established in 1999 and actually held by Christopher Daniels, Colt Cabana, Chris Hero, and Daniel Bryan! LeGrande entered in Kansas City Royals gear (and to the Lorde song of the same name) in the heart of SF Giants country on the night of Game 3 of the World Series so you can imagine the reaction. The orange-clad Daniel Torch held his own during the match but the chip on The “Bad Boy’s” shoulder was too much to overcome and LeGrande took this match. 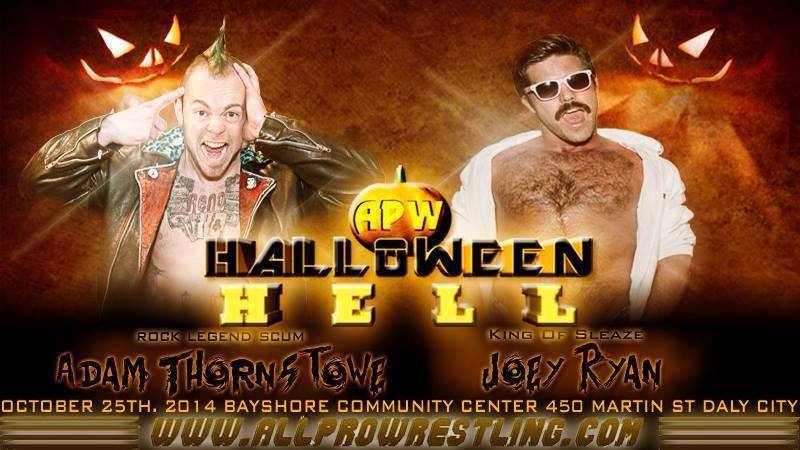 This was a special attraction match that was itself alone worth the price of admission and was appropriately billed as “Sleaze vs. Scum!” Former TNA superstar and founding member of the Southern-California promotion Pro Wrestling Guerilla Joey Ryan and the longest reigning APW Universal Heavyweight Champion of all time Adam Thornstowe did more than delivered in this match with memorable spots that took these men outside the ring and—at the risk of sounding cliché—a Superkick outta nowhere from Thornstowe! The lesson learned from this match when it comes to Sleaze vs. Scum, the sleaze rises to the top! 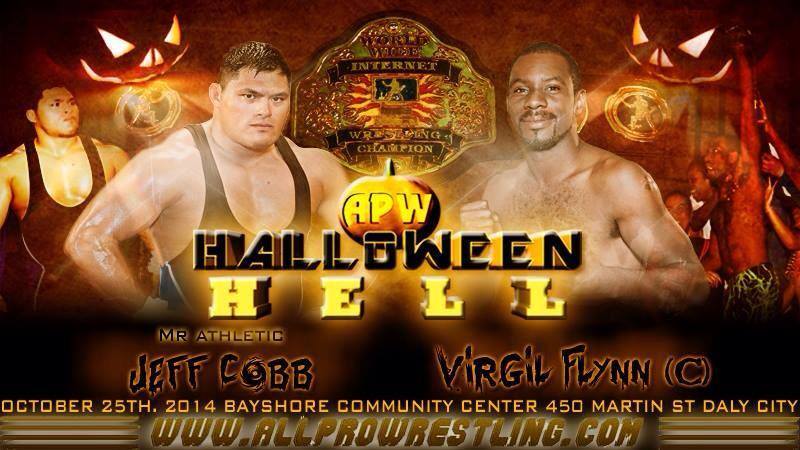 Back in June at APW’s “Friday The 13th” show, Jeff Cobb won the Lucky 7 Gauntlet Match which guaranteed him a shot at the Internet Title at a time of his choosing. At the last APW show, War At The Shore, Flynn captured the coveted title in a 3-way dance against former champ Chris Hero and Jeckles the Jester. To paint the picture, Cobb is a physical specimen who legitimately competed for Guam in the 2004 Summer Olympics and won the APW Young Lions Cup Tournament in 2012, while Flynn—known as the human cannonball—is a veritable high flyer, is 5’6” and a buck 40 soaking wet.

The size difference was the real story with Flynn proving difficult for Cobb to get his hands on, but when he did, Cobb dominated with force! After a clothesline that tuned Flynn inside out and a hat-trick of human cannonballs onto Cobb, Flynn retained his title, but was attacked by Boyce LeGrande following the match putting the Champion on notice. 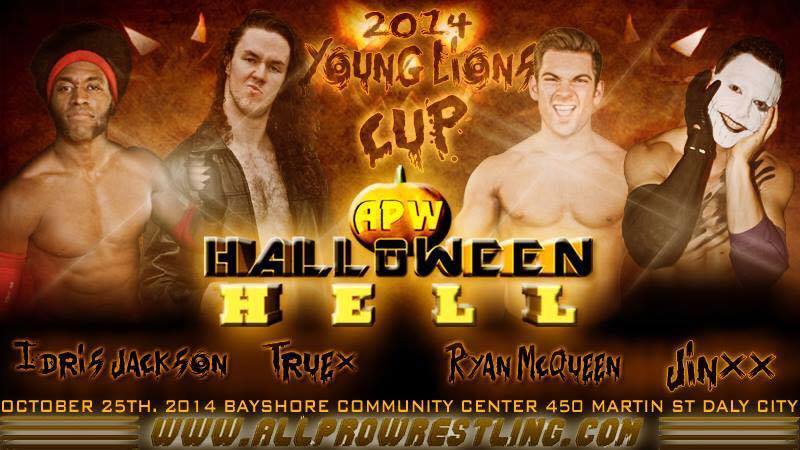 The Young Lions Cup is usually decided in a single-elimination tournament that showcases the up and coming talent of APW. For the first time since 2008 however the trophy was decided in one match as these 4 mean wend head to head to decide who would take home the Cup be this year. Truex, Jackson, and Jinxx were all trained at the world-famous APW Boot Camp and McQueen at the Reno Wrestle Factory. Truex has no shortage of a mean streak and since his debut in All Pro Wrestling has to date not made any friends. Both Jackson and McQueen have traveled throughout California and parts of Nevada and are building names for themselves, while this was Jinxx’s singles debut in APW.

The elimination match was exactly what you would expect out of 4 young men trying to prove themselves the best! This match could have easily headlined any show and though all four of these guys would be classified as rookies they displayed a savvy in the ring and knowledge of psychology that usually only comes with years of experience! Jackson seemed to be on a roll, eliminating both Jinxx and Truex within minutes, but when he ended up one-on-one with Flyin’ Ryan, McQueen got the better of him. Always the class act, Jackson offered his hand as a gesture of respect, but McQueen spit at him and he left the ring. In a post-match interview McQueen noted that he deserved the Young Lions Cup and more. Real Life wrestling coach and trainer Adam Thornstowe came out to talk sense into him, but received a superkick for his troubles.

::At Intermission the costume contest was won by Officer Rick Grimes of the Walking Dead (children) and Jeff Hardy (adults).:: 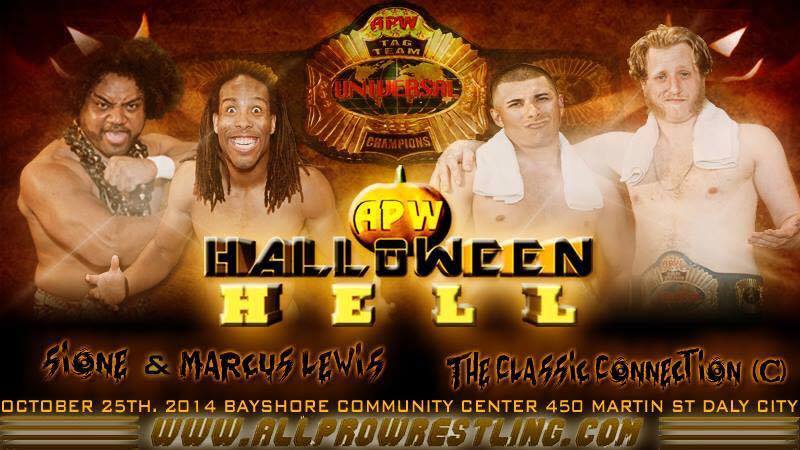 Lewis and Finau were finalist in last year’s Young Lions Cup Torunament where Lewis (known then as the “Rookie Sensation”) came out on top, but the two of them teamed up for a shot at APW gold! The Champions are managed by former Ring Announcer Donovan Troi who has played a part in all of Classic Connections matches since he began working for them. The team has also brought on the hired gun Dominic Simon who got very physical with Marcus Lewis while the official was focused on other competitors.

With the help of a foreign object Shapiro picked up the win for his team and the Classic Connection promptly attacked the challengers following the match, but their APW Boot Camp comrade TLo the Insano made the save. Adding to the chaos, Caesar Black and his cronies rushed the ring again. Damien Grundy, Will Rood, and Kevin Michael Johnson, began to attack the APW Boot Camp Graduates until the calvary arrived in the form of JR Kratos and Jody Kristofferson! 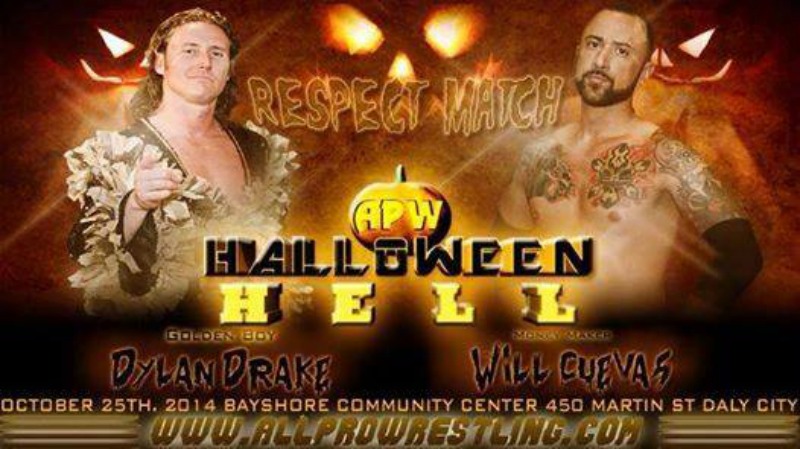 These men have a storied past. Cuevas was a former APW referee but their rivalry came to a head when Drake assaulted him during a match that he was officiating between Drake and Matt Hardy and Cuevas responded in-kind. Because of his physical involvement in the match Cuevas was suspended as an official and set his sights on The Golden Boy. The rules of this match were very simple: No disqualification, no time-limit, no count-out, no pinfall or submission. The only way to win is to force your opponent to admit that they respect you—not unlike an “I Quit” match. It didn’t take long for these two to fight over the barricades and through the crowd before making their way back ringside. After what can only be described as a battle, Cuevas locked in a Figure-Four leg around the steel ring post on the former APW Champion and forced Drake to say that he respected him. 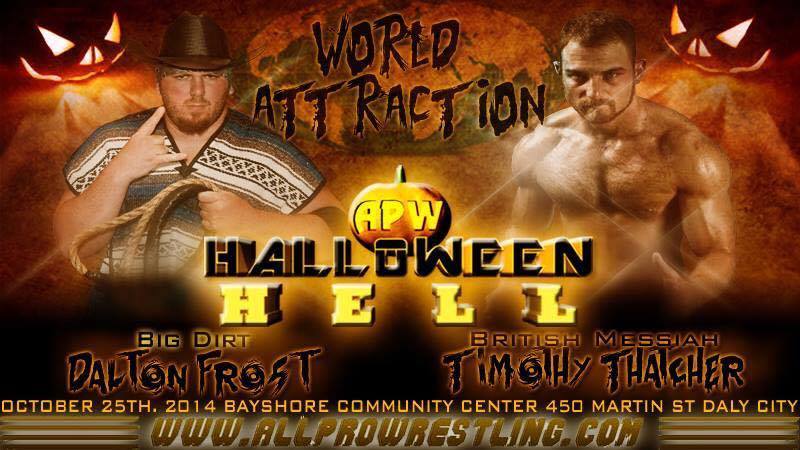 This match was a World attraction of truly International proportions! Texas met the United Kingdom as Dalton Frost—who could easily be compared with the Legendary Cowboy Stan Hansen—took on Timothy Thatcher who is a technically skilled brawler. When this match was announced it was widely assumed that it would be a rough and tumble affair featuring heavy hits and a particular mat prowess and it delivered on all counts. When the dust settled the cowboy from Cold County took the win. 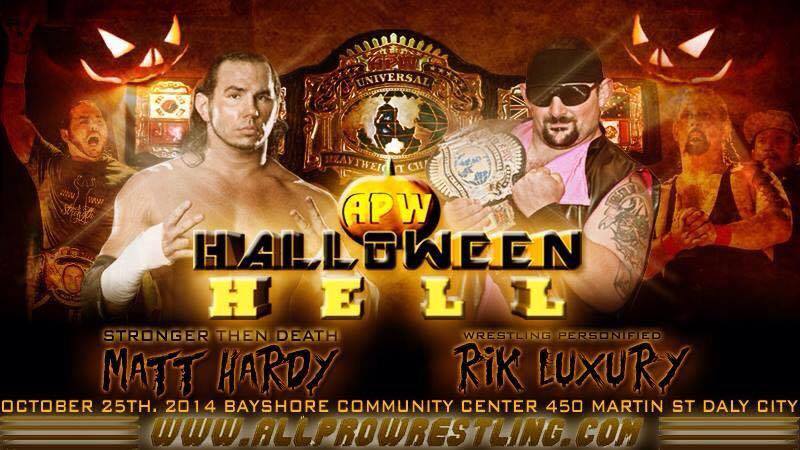 No secret that former ROH and WWE Superstar, and current TNA Superstar Matt Hardy has done his share of travel and vied for titles and championships the world over! Hardy has had impressive showings in APW against former champions earning himself a shot at the Top Prize in APW. But if Luxury or Pink Mink Inc. had anything to say about it, Hardy would leave empty-handed. “The Iconic” Matt Hardy had a little bit of fun with the live audience in attendance but when the match got underway, he was all business with his eye on the prize! Senior APW official Sparkey Ballard served as referee for the high profile match but was rendered unconscious for a few moments when Markus Mac summoned his Pink Mink Inc. boys Julio Pedroza and associate Vinnie Massaro to put away the challenger, but Hardy made quick work of them. While the referee began to stir, Luxury proved himself an opportunist by rolling Hardy up for a pin and grabbing a handful of Hardy’s tights.

Following the match, former Pink Mink Inc. member Dave Dutra came out to the ring to speak with the Champion. Dutra was unceremoniously excused from the faction at last year’s Halloween Hell following a grueling Ladder match with Drake Younger (Current WWE NXT referee Drake Wuertz) to determine the Undisputed APW Internet Champion and he officially challenged Luxury to a match for the Universal Championship at Kristmas Kaos in December. Luxury stated that since Dutra hadn’t won a contender ship then he’d have to put his career on the line if he wanted the Title. Dutra agreed but said that if (or rather when) he won the title, Pink Mink Inc. would have to disband. Luxury complied and Dutra sealed the deal by giving the Champ a “Double DT” to finish the night!

Overall it was a phenomenal show with all of the competitors proverbially saying “Try and follow that.” There were a handful of solid built rivalries and feuds that make Kristmas Kaos a must-see including: Caesar Black and his crew, LeGrande/Flynn, McQueen/Thornstowe, Classic Connection/TLo The Insano, and Luxury/Dutra!