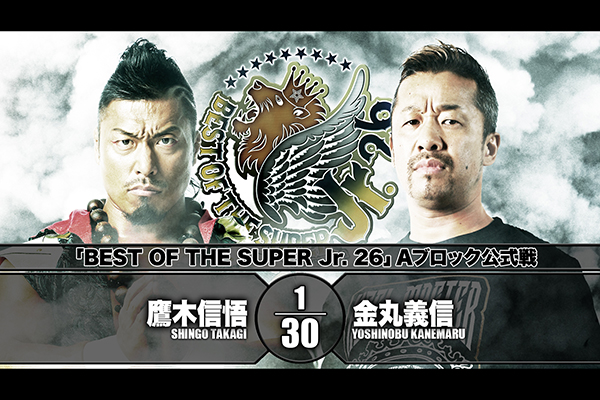 Night 5 was the third set of matches in the A block. It featured SHO vs Taka Michinoku, Marty Scurll vs Tiger Mask, Taiji Ishimori vs Titan, Dragon Lee vs Jonathan Gresham, and Yoshinobu Kanemaru vs Shingo Takagi.

First on the card was Roppongi 3K’s SHO vs Suzuki Gun’s Taka Michinoku. Taichi was at ringside, but that didn’t play into effect in this match. Taka targeted the injured arm of SHO that he had hurt in his match gains Takagi in night one. SHO eventually hit a big spear to regain momentum. Throughout the match, Taka went for multiple crossfaces, similar to his match against Gresham. Eventually, SHO hit a lariat, followed by a Shock Arrow to finish it. This match gave SHO his first win of the tournament. His two previous tournament matches were match of the night candidates so this match was a little different.

Nonetheless, this was a decent opener, that reinforced SHO’s true potential while also making Taka seem like the sneaky Suzuki-gun veteran. It would have been interesting to see Taichi get involved, which is what most people probably expected. Unfortunately for Taka, it seems like a real possibility that he could go without a win. Two of the people who he may have had a chance against(Gresham and Tiger Mask) both beat him. While he wasn’t expected to beat SHO at all, his loss and the fact he was the first tournament match on the card could point towards this.

Mutual respect was shown at the start of the match, along with Brody King at ringside. Scurll went after the arm and managed to land a finger snap. This led to him continuing to target this area, paying special attention to the wrists of the veteran.

Tiger later further injured the knee that had been injured before the tournament and had been a target of both Taka Michinoku and Yoshinobu Kanemaru, when he hit the post with his knee. Tiger had a couple of near falls with a tombstone followed by a tiger driver, and later with a backslide out of Scurll’s chicken wing. Scurll eventually won the match, with his black plague. This was a match that wasn’t too bad, but nothing special stood out making it appear below average.

Ishimori and Titan started off as a usual match. Paced increase when Titan hit a rana but then got slammed into the apron. Like Titan’s match with Kanemaru, Ishimori tried to remove his opponents mask. More heel tactics from Ishimori followed, such as choking Titan with the ropes.

Ishimori almost submitted when Titan locked in the Titan-X submission hold, but Ishimori managed to escape. A lariat followed by a bloody cross finished the match. Nothing really came from this match, like the previous one this was pretty average and didn’t really help either wrestler.

Gresham started off the match win various holds and roll-ups, including arm drags and even a kimura. Lee eventually regained control with an STO. A powerbomb to the IWGP Junior Heavyweight gives Gresham 2. Gresham beautifully performs an octopus hold.

However, Lee powered out and then hit Desnucadora for the win. While this match was decent, it was much shorter than expected. This match while good, should have probably been slightly lower on the card due to its length. Gresham really got to showcase his talents in this match.

These two had a match back in the new beginning tour, in which Shingo had won. In the last match of night 5, Takagi came out explosive looking really good. The match went outside, and Shingo was slammed into a table. Kanemaru went for the figure 4 multiple times throughout the match. Taichi tried to get involved by sending a chair in but it was to no avail. Shingo blocked a whiskey shot and hit one of his own.

He then hit a pumping bomber followed by a Last of the Dragon for the win. Not your typical NJPW match, but was decent overall. Kanemaru, like his fellow Suzuki-gun member, hasn’t won a match, but I’m guessing he’ll win a couple before the end of the tournament. Takagi looks strong and poised to go undefeated.