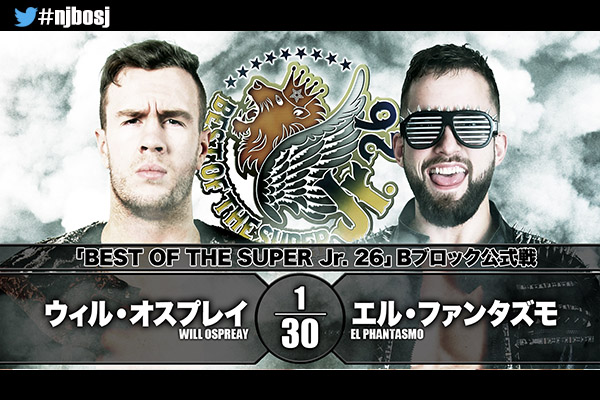 Night 7 was the first day of the combined block matches. In total there were ten tournament matches, 5 from the A block and 5 from the B block. Tonight’s matches were Taiji Ishimori vs Taka Michinoku, Bandido vs Ren Narita, Jonathan Gresham vs Titan, Rocky Romero vs YOH, Dragon Lee vs Tiger Mask, Bushi vs Douki, SHO vs Yoshinobu Kanemaru, Robbie Eagles vs Ryusuke Taguchi, Marty Scurll vs Shingo Takagi, and El Phantasmo vs Will Ospreay.

Ishimori vs Michinoku was first on the card. The two heels lock up and Taka goes for the eyes. He takes Ishimori down with his side headlock, but Ishimori eventually escapes. Taka didn’t let Ishimori get up and kept trying to keep him down. He hits a spin kick for 2. Ishimori eventually won the match with a bloody cross. Not much to be said for this sub 5 min plan. Ishimori is still undefeated and Taka still hasn’t won a match. The result was expected, but the match was too short to say anything good about it.

Next up we had Bandido vs the young lion Ren Narita. Mutual respect is shown between these two before the match with a handshake. Bandido hit a flapjack for 2. Narita hit an overhead suplex onto the apron. Bandido with some strikes but Narita rolls him up for 2. GTS and a 21 Plex win the match for Bandido.

Another short bout, this one about 6 and a half minutes. Decent effort from both these men in this babyface vs babyface match. Similarly to Ishimori vs Michinoku, this match was too short.

Next on the card was Gresham vs Titan. They shake hands, lock up, and break. Titan goes for a pin but Gresham bridges up and hits an arm drag. Both men hit multiple roll-ups, specifically cradles to try to win the match. Gresham hit an octopus and reversed it into a cradle for 2. Titan eventually submitted after 11 min.

The fourth match of the night was a student vs teacher showdown, YOH vs Romero. They lock up, work the ropes and break. YOH tried to keep things down, but soon both men were exchanging strikes. YOH’s Dragon suplex was countered into a cradle for 2. He locked in the armbar, but this time YOH cradled him for 2. Romero eventually taps out to the calf crusher. Once again, Rocky looked absolutely great. This student vs teacher bout was pretty good. Both men shined in this match. YOH picked up his second win.

Dragon Lee faced Tiger Mask in today’s fifth match. They Shake hands, lock up, and Lee takes him down. Tiger hit shoulder tackles followed by kicks. Tiger Mask hit a high cross on the floor. He tried another in the run but Lee rolled through two. Tiger suplex was countered but Lee fell into a sleeper. Lee hit two knee strikes, followed by Desnucadora for the win. Another sub-ten-minute match, that was pretty good. Both men looked fine, but nothing too special here.

Next was Bushi vs Douki. They brawled immediately. Bushi hits a rana to the floor and chokes him with his shirt. Douki slams Bushi back in the ring and hits the running double stomp. Fishermen’s neck breaker hit by Bushi takes out Douki. An MX finished the match off. Another really short match. While it was ok, I would have looked forward to a longer match by these two men. They seemed to look good together.

Roppongi 3k’s SHO was up next against Yoshinobu Kanemaru. Kanemaru ‘Shockingly’ attack’s SHO before the bell. SHO regained control and hits an apron penalty kick. More brawling on the floor occurred. Kanemaru slams and suplexes SHO to get the make it back into the ring to beat SHO by count out. Short match that wasn’t too good. While overall the match quality wasn’t that bad. These two are capable of much more and should have been given a longer and better finish.

However an upside to this match was it legitimized the possibility of a count out win in the future, however, I feel like a different match should have been given this finish. Anyway, the match gave Kanemaru his first win of the tournament. I expected both of these men’s records to be better at this point of the tournament, but oh well.

Eagles vs Taguchi was up next on the card. They lock up and Taguchi tries to bring Eagle down. Eagles, as usual, went for the knee. A Dodon was countered into a Ron Miller Special. 450 missed and Taguchi locked in an ankle lock, but Eagles escaped. Turbo backpack for 2 and Taguchi soon after hits a Dodon for 2. Taguchi goes for another Dodon but Eagles cradled him for the one. Great match that worked a pretty good pace.

I’m surprised it went lower on the card, just due to the men involved in the match. Not saying it was a bad match, but given that NJPW that Eagles isn’t around that often and Taguchi is older now, I expected the match to be lower in favor of a couple of other matches. (SHO vs Kanemaru or YOH vs Rocky). The match itself had quite a few good near falls near the end that had me really buying in. I wish the other matches also had this much time to shine, but time constraints probably prevented it.

The penultimate match slot was given to Shingo Takagi vs Marty Scurll. Brody King came out with his villain enterprise brethren. Scurll attacks with kicks but Shingo powers up to remain dominant. Scurll hits an apron superkick and then goes after the arm. Scurll tried to keep Shingo down with strikes, but Shingo overpowers him.

Black Plague is countered with a brutal lariat. A ref numb had King in and he slammed Shingo. King tried to get involved in another ref bump, but Takagi stopped him. Pumping Bomber for 2 and Last of the Dragon finished him off. Great match, both Shingo and Scurll looked absolutely great here. Scurll looked competitive in a tournament where an undefeated Shingo is a high possibility. King interference was not needed, but an overall great match.

El Phantasmo vs Will Ospreay

The last match of the night had El Phantasmo vs Will Ospreay. Ospreay hit a dropkick as soon as the bell rings. The match goes outside pretty quickly and it’s fucking insane. ELP and Ospreay are going right at it with one another. ELP hits a great moonsault onto Ospreay. Springboard forearm gets Ospreay two later. Robinson’s special, And Ospreay went for an Oscutter. Blocked into a backslide and an insane rally followed.

Phantasmo hits a top rope splash, then Ospreay blocks the wrist lock transition clothesline(it’s only a rainmaker when Okada does it) and hits a modified powerbomb. Oscutter countered into an Argentine cutter. Ospreay hit a Spanish fly followed by a shooting star. Stormbreaker countered, low blow, Argentine cutter, and CR3 for the win. Both of these men were great. This match was my personal second favorite of the tournament. The only one I preferred was SHO vs Takagi. ELP looks poised to go undefeated. Both men were working a great pace and were constantly in action. This match had an insane amount of big spots.

Tonight was the first night of the combined block matches. There were a couple of really good matches, but too many were sub ten minutes. I would prefer 5 block matches a day in order to give each wrestler a decent amount of time to shine. Due to the time of each match I’m gonna give the show a 5/10 overall.