CM Punk and The Week Heard Round The World 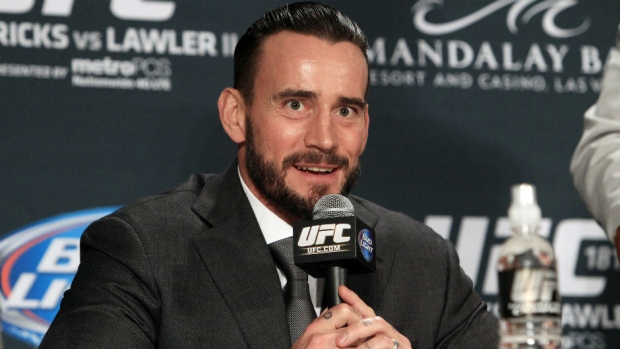 The past week or so has been a whirlwind of a week for former WWE Superstar CM Punk. It kicked off on Thanksgiving when Personality and Professional wrestler Colt Cabana released an interview with close friend CM Punk on his own long-running podcast—The Art of Wrestling—and set the wrestling world on fire! Fans took to social media, “dirt sheets,” and blogs the world over proclaiming that the internet was broken and their minds were blown; little did they know that that would just be the beginning, but of course, that’s the best place to start.

An interview that was 10 months in the making finally aired as CM Punk broke his silence on the story behind his nigh on mystical departure from WWE. Punk says that there were several reasons behind his post Royal Rumble 2014 departure (many of which had been rumored since January), among these were: his displeasure with the lack of opportunity given to some of his colleagues, an unwillingness to work a match with Triple H, his not being booked into a WrestleMania main event, and his own health considering he had been working hurt. Punk acknowledged that there was at least some merit to all of these things, but the main reason was his health.

One theme that appeared to run throughout the interview—which was wonderfully and naturally executed by Colt Cabana—was tensions between Punk and Triple H. It is not that they didn’t like each other, there is no so-called heat, but the former Champion noted that there were “never any good vibes” between he and WWE’s Executive Vice President of Talent, Live Events and Creative. 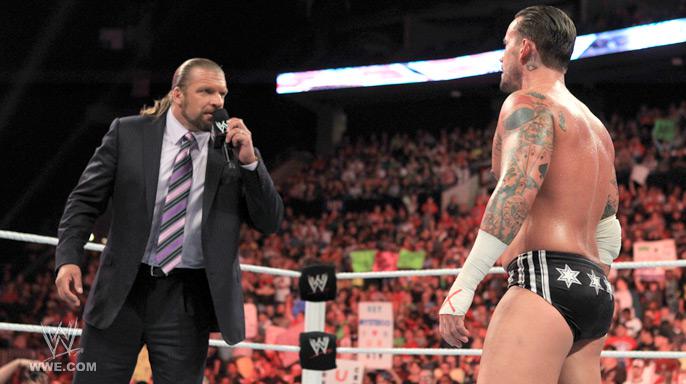 Punk told a story about an exchange with “Hunter” where Punk was scheduled to appear in the film 12 Rounds 2 but he realized that it was during the European tour and noted this to Triple H who said that it was not and Punk would be able to do both. Punk asked him to confirm that and let him know and later on Punk heard through the grapevine that he’d been replaced in the film with Randy Orton; not something that Punk minded entirely, but noted that he should have been told directly. Stories like this coupled with his insistence that he did not need to face Triple H at WrestleMania 30 all contributed to the lack of good vibes.

Punk noted that he had been running ragged close to the end of his run with the company out of Connecticut, and was actually excited to have surgery because it meant time off. He recounted several occasions that he received phone calls or text messages from Vince McMahon days—in some cases hours—after getting out of surgery attempting to schedule his return to the ring. Speaking of the Chairman, Punk noted that he had some uneasy feelings about some ideas he had being shot down by WWE’s head honcho but then allowed by other individuals or used elsewhere. For instance, though he was not allowed to have sponsors (logos on his trunks shirts etc.) Brock Lesnar was; though he was not allowed to accompany a fighter to a UFC octagon, Triple H was allowed to escort Floyd Mayweather to a boxing ring.

Additionally, the Best In The World revealed that the idea for the dominant stable that came to be known as The Shield was actually his idea. Though he didn’t create the name of course, Punk originally had the vision to “bring up three guys from FCW” (Florida Championship Wrestling [the former “developmental territory” for WWE which was effectively replaced by the Performance Center and NXT out of Full Sail University]). The original three guys suggested by Punk were Dean Ambrose, Seth Rollins, and Chris Hero (known then as Kassius Ohno); the powers that be suggested Roman Reigns (then Leakee) instead of Hero to which Punk agreed. The group was originally to be lead by Punk, as some may remember they debuted while interfering in a match between him, John Cena, and Ryback, and were billed as mercenaries for Punk. Decision was made later however to allow the group to go it alone. 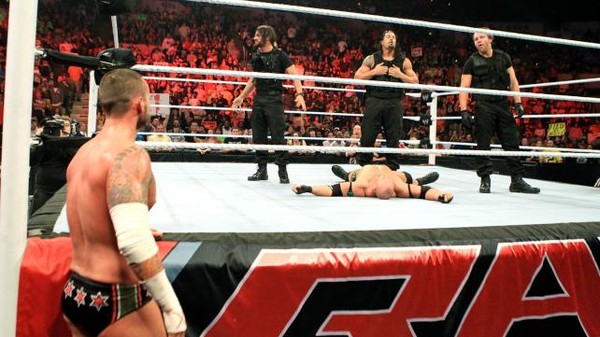 Speaking of Ryback there seems to be no love lost between he and the longest reigning Champion of the modern era. Punk lambasted Ryback and called him “steroid guy.” He noted that Ryback kicked him “as hard as he could,” broke two of his ribs and had a generally snug style in the ring. These incidents convinced Punk to refuse to work with Ryback, but Vince McMahon told Punk he’d “owe him one” if he did a short program with him (a phrase that would become a theme in his and McMahon’s dealings). In working with Ryback however Punk was hurt again when a gorilla press went wrong and Punk had an unfortunate landing. He cornered the “Big Guy” and told him to either “admit that he did it on purpose or that he was dumb as f**k and he sucks” to which Ryback replied that he was an idiot and he was sorry. 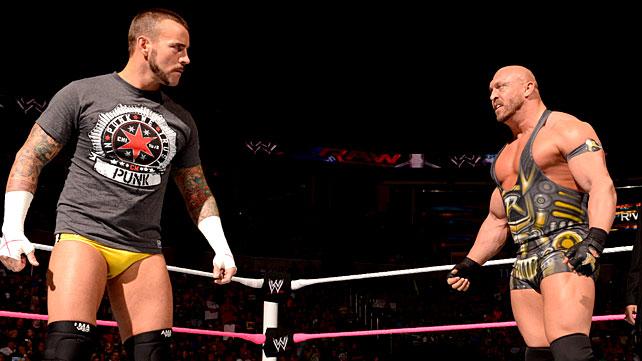 The interview was rife with nuggets about how bitter he was that Curtis Axel didn’t get a push despite his hard work, a story on how he pooped his pants on SmackDown, and how the WWE staff doctors bungled a medical situation and misdiagnosed a staph infection as a “fatty deposit.” Punk made clear though that despite the rumors swirling throughout the “Internet Wrestling Community,” he has no problems with Cena, Lesnar, Jericho, Kane, Orton, Batista, or The Rock, and noted the only reason he didn’t want to work Jericho or Kane is because he felt they’d worked together enough already. Punk also took the opportunity to make clear that he was fired on June 13th, his wedding day to AJ Lee, and that he did not quit.

Punk would sit down with Cabana again for the following episode of The Art of Wrestling, but not before WWE Chairman Vince McMahon would sit down as a guest on Stone Cold Steve Austin’s Podcast which was recorded and aired live on the WWE Network. The McMahon/Austin interview was in itself a spectacular event that is a story in its own right, but one highlight was when Austin asked McMahon if he wanted to address Punks comments from the podcast released days earlier. The Chairman said that he wanted to apologize to Punk and noted that “Corporate doesn’t always know what talent relations is doing.” 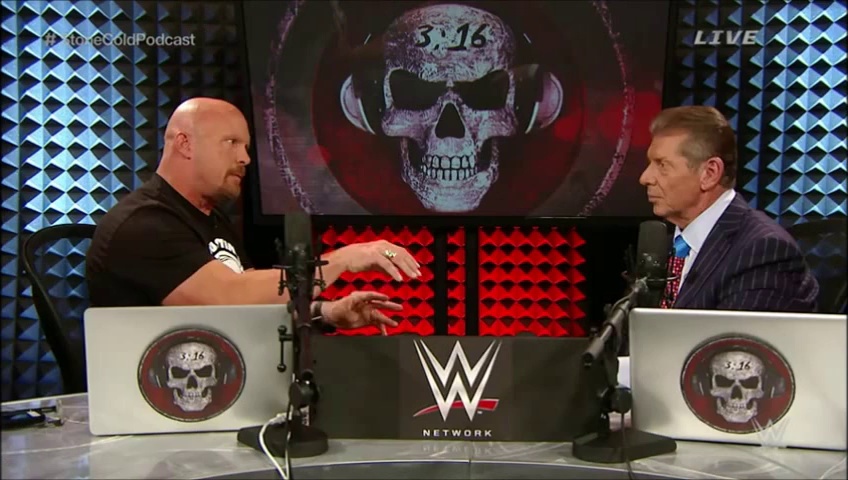 Vince said that he is open to doing business again with Punk and “hopes they can get back together again.” Vince admitted that he didn’t listen to Cabana’s show but had heard about it and wanted to remind everyone that there are two sides to every story. Austin broke things up a little and noted how the whole thing reminded him of his own attitude back in 2002 when the Rattlesnake refused to do the job for Brock Lesnar and subsequently no-showed a TV taping. Vince noted that when Punk was around he “went hard and worked his ass off;” he said that Punk was a loner, and has a lack of communication skills and that that is just what happened.

When Punk did take to Cabana’s show once again it was more to give closure to the fans than gain any for himself (which was the goal of the first show). The return was more like a typical episode of The Art of Wrestling, the guys talked shop—including of course a follow-up, but there was less about “why he left” and more about what things were like. Punk said that while he appreciated Vince’s apology, he did not accept it as he believed it to be a publicity stunt. Punk talk more about working hurt, and how he was removed from a Slim Jim sponsorship and an appearance at Wizard World’s Comic Convention because of “the front office.” The episode closed with Punk thanking all of the people who ever bought his t-shirts, texting gloves, or paid to see him wrestle.

How could you top any of this off? A storyteller tells his whole story, a millionaire chairman apologizes, the storyteller gets the final word of closure. How do you top it? Sign a deal with the UFC! Phil “CM Punk” Brooks, it was announced, signed a contract with Ultimate Fighting Championship after a meeting with President Dana White at the UFC 181 event; Punk will make his debut in the octagon in 2015 at some point. This brings to mind the transitions made by current WWE World Heavyweight Champion Brock Lesnar, current TNA star Bobby Lashley, and new bond villain Batista, all who found success in mixed martial arts after careers in the WWE. Of course there has already been criticism of Punk and UFC, but there has also been praise. Former WWE Diva Champion and Mrs. CM Punk AJ Lee was present at the event and said on Twitter that she is “the proudest wife in the world.” The best anecdote to come from this portion of the story, however has got to be how Jason David Frank—whom many know as the former Green Ranger from Power Rangers—has officially challenged Punk to a fight in the UFC; classic. WWE of course released a statement wishing Punk well in this new endeavor into MMA.

Punk noted early on that he preferred to give the interview to his buddy Cabana because he had no ulterior motives and was a friend; there was no indeed better place for this interview to happen. Colt Cabana has honed his skill as an interviewer over the last four and a half years and has been friends with Punk for what has seemed like a lifetime, this made for a natural interview where stories could fly and feelings could be expressed. There was a little flack on the liberal use of the “F-Word” but Punk notes that that’s just the way he talks. Overall this was the best place and time for this exchange and we encourage you all to give the shows all a listen for yourself as they are all must hear!