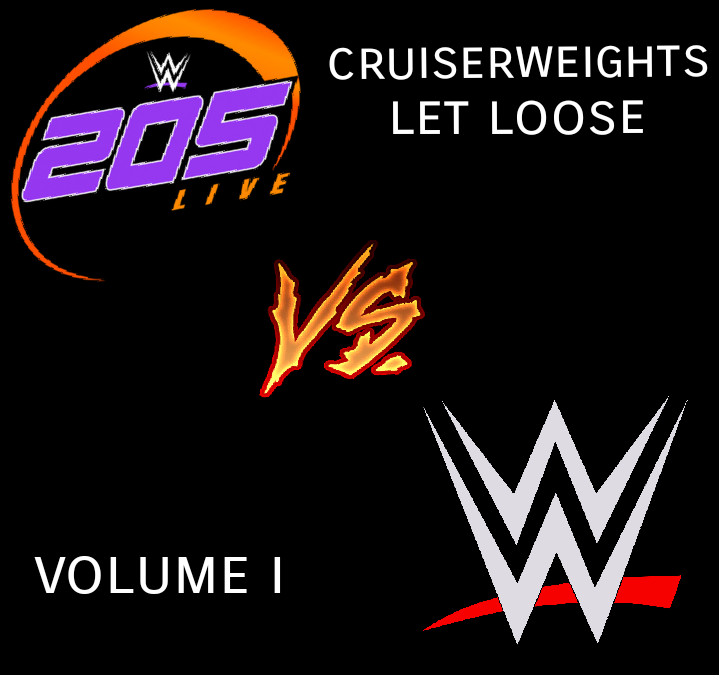 There has been a question on the lips of many WWE fans, more specifically the 205 Live loyal, that remains unanswered. Or if it has been, then that answer is in the negative. Since it became apparent that the 205 Live roster’s appearances on Raw would be in isolated segments on Monday Night Raw, far away from the rest of the red brand’s stories, the question we have asked is; why can’t the cruiserweights interact with main roster wrestlers? Why aren’t they allowed to play with the big boys on Raw or Smackdown Live?

Before the Network exclusive show found a return to form in recent weeks, the overall quality of the show had regressed to the point that concerns were voiced regarding how long it would continue, and more cries were called for the current talent to be incorporated into the main fold.

This still might not end up being the case. We still might not see the potentially entertaining personality clashes, or the meshing of wrestling styles, due to this unnecessary segregation. Well, for a bit of fun, I’m going to travel to a parallel world where this division doesn’t exist. In this, the first of a mini-series, I will go down the “fantasy booking” road and present to you what I believe would be entertaining match-ups between Raw or Smackdown stars and 205 Live members – past or present – whether it be due to the possibility of exciting in-ring action, or a fascinating character dichotomy.

The pairings will be taken in isolation; all current product storylines will be put to the side in order to allow the stories I present to take place. In some instances, like this first in the list, I will even change their babyface/heel alignment.

1) Gentlemanly Jack Gallagher vs The Miz

There is no denying that Jack Gallagher is a very talented wrestler. Even in his current villainous guise, he still delivers top quality bouts. However, I much prefer the babyface version of Gallagher; the light-hearted Brit who doesn’t take himself too seriously, as he knows that he can get it done in the ring. His in-ring style is a bonafide crowd pleaser, from the unorthodox and sometimes comical array of submissions to the hard-hitting dropkicks and headbutts. With such a varied arsenal, it’s no wonder that Jack is confident enough to dress and act the way he wants.

This quiet self-assuredness would be something that a wrestler like The Miz would take issue with. If their paths were to ever cross, The Miz would waste no time in ridiculing Gallagher’s overall presentation; the vaudevillian mustache and slicked down side-parting; the pasty white skin; the umbrella; the “tighty-whitie” style trunks. All these fashion tastes would be prime fodder for The Miz to pounce on, especially if they were brought to light in a MizTV segment.

Such a barrage of insults would be water off a duck’s back for Gallagher, however. As shown in his occasional “dual” segments on 205 Live, he can more than hold his own with a microphone and a ring full of props. I would go so far as to say that Gallagher would be in his element on MizTV.

Of course, Miz has his cronies in Curtis Axel and Bo Dallas to help him when things start to look bad for the A-Lister. The duo would undoubtedly come to Miz’s aid with a beatdown in some form or another. But there would also be instances where Gallagher would gain the upper hand and clear the ring with some well-aimed headbutts. If The Miz was left in the ring alone with a riled Gallagher,  then Gentlemanly Jack could really go to town.

One of The Miz’s strengths (if you can call this a strength) is his ability to be thoroughly embarrassed when his opponents get their ultimate comeuppance. If Gallagher was able to get his hands on The Miz, and tie him up into a visually hilarious human pretzel, then this would be a moment of great humiliation for the current Intercontinental Champion and would make for a feel-good moment for fans of the Cruiserweight Classic participant. A match between the two might not have such serious stakes attached, but the spectacle element would be enough to gain fan interest.

Drew Gulak is one of the more successful acts on 205 Live. He hasn’t been in contention for the Cruiserweight Title much, but his character has certainly had a lot of airtime on Tuesday nights. Similar to Cactus Jack’s anti-hardcore gimmick in early days ECW, Gulak aims for a “Better 205 Live” by campaigning for more ground-based wrestling, as well as less pantomime-esque theatrics in the form of chanting, cheering, and pandering to the crowd. Presenting his vision to the crowd through the magic of Powerpoint, Gulak’s segments have won fans over, regardless of which direction his moral compass points.

Despite Gulak’s acclaim, Dean Ambrose is an immensely popular babyface who doesn’t have to do very much to elicit a very positive crowd reaction. Ambrose isn’t exactly known for his aerial offense, but still has enough moves in his arsenal that fly in the face of a fair amount of Gulak’s Powerpoint slides. I imagine Amrose’s unhinged persona would not sit well with Gulak’s ideals at all.

Like the above example between Gallagher and The Miz, segments between Ambrose and Gulak would give the audience some comedy angles that would fit well with both characters. Even Dean’s talking segment, The Ambrose Asylum, presents as wild and unprofessional in comparison to the Powerpoint Presentations. Dean interrupting Drew’s slideshow after slideshow in his typical garish fashion would provide some light relief that the audience would lap up.

When things become more heated, however, the back and forth between the two would result in a match or a series of them. It’s easy to forget with Gulak’s square persona that he is a mean wrestler when he wants to be. He has shown recently in the Cruiserweight Championship Tournament that he has a vicious side and can inflict considerable damage. Ambrose has the kind of in-your-face personality that would bring about the Dr. Jekyll to Mr. Hyde transformation. And to highlight this heightened anger and intensity, Dean can play the babyface in peril very well and would help portray Gulak as a credible threat. Don’t let either of these men’s goofy traits fool you: a grizzly encounter or two would be inevitable.

TJP has had a wide variety of luck during his time as a WWE Superstar, from the highs of being crowned the inaugural Cruiserweight Champion, to the lows of suffering a clean sweep defeat to Rich Swann in a Two Out of Three Falls Match. In that time, Perkins no longer wishes to fight the good fight, and now cuts a selfish and petulant figure, most likely exacerbated by his betrayal at the hands of his former master, Neville. He now either cheats to win or displays an ugly temper when he loses by wrecking the furniture surrounding the ring.

Finn Balor is much less hot-headed than TJP. He may display a fierce aggression in the ring, but overall, he comes across as very cool and composed, less prone to wild flashes of cantankerousness. The Irishmen doesn’t let many things phase him.

If these two wrestlers were to have a run of the mill match on Monday Night Raw, for instance, and Finn was the victor after an impressive technical showcase, Finn may offer his hand as a sign of respect to someone who pushed him to the limits. Unhappy with being on the receiving end of a loss, however, TJP would most likely swat that proffered hand away, as is keeping with his current displays.

This would send TJP down the bitter path of not being able to accept that Balor bested him in a one on one encounter. Stealing a page out of the book of his long war with Rich Swann, TJP may revert to either post-match segments where he exaggeratedly applauds Balor’s in-ring prowess against other opponents or sarcastically commiserates him on a valiant effort that just wasn’t good enough on the night.

As the weeks go on, TJP’s jealousy would reach boiling point. He would demand match after match with Finn, or challenge him to different competitions to see who was the best in their field. Finn, with his back against the wall, would have no alternative but to strike back. One of my favorite sides to Finn is when he isn’t wearing the Demon body paint but still digs down deep to deliver an intense and aggressive gameplan.

For various reasons, TJP isn’t everyone’s cup of tea, but his wrestling abilities are very accomplished, regardless of how he presents himself. An encounter between him and Balor would be a very technical, yet impactful match. From a psychology perspective, some of Finn’s signature moves include the use of his legs, most notably in his finisher; the Coup de Grace. TJP’s go-to is the inverted kneebar. If he was able to lock this move in on a number of occasions throughout a match, this is bound to wear down Finn’s legs, stinting his ability to deliver the most impactful parts of his offense. Make no mistake, a well thought out story could be told between them both.

This concludes the first entry in this mini-series. On paper, they might not seem like the most exciting of match-ups, however, if you look closely at what makes each wrestler tick, what strengths they bring to the world of wrestling as a whole, these could be very compelling encounters. I will detail more feuds for you over the coming weeks.

In the meantime, can you think of better opponents for the above cruiserweights to face off against? Can you fantasy book certain segments or angles in the above match-ups that would make for good television? Feel free to drop your comments here or wherever you read this on social media. You can find me on Twitter, and in Social Suplex’s Facebook group.