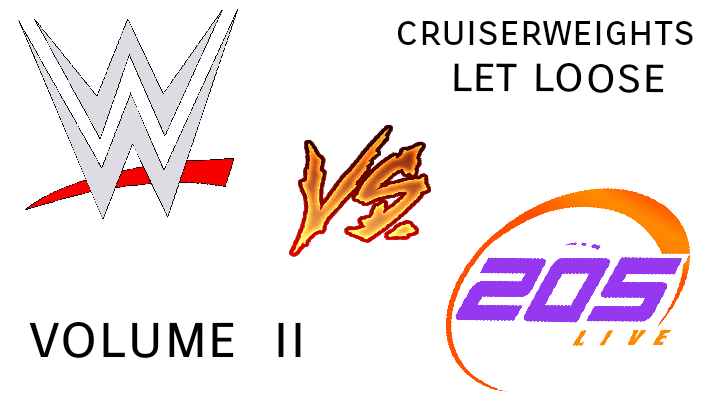 Welcome to the second in a three part mini-series where I don my “fantasy booking” hat by matching up some of my favorites from 205 Live (past and present) against members of both the Monday Night Raw and Smackdown Live rosters. If you missed the first entry in the series, you can read it here.

When sitting down to write this installment, I worried that I had used up most of my favorite cruiserweights too soon, that the ones I had yet to use wouldn’t have any interesting match-ups available for them. However, by scouring my mind for someone currently inactive, as well as being inspired by recent but impactful character development, I managed to scrape a few together.

There might be a certain pairing that hasn’t yet made the cut, and some of you might have a more than sneaking suspicion as to what that will be, but I will go for a save-the-best-till-last mentality with that one. But in the meantime…

4 – The Brian Kendrick vs Bray Wyatt

In a previous column, I noted how The Brian Kendrick and Bray Wyatt’s characters shared some similarities. They both thrive on psychological warfare as a tactic, getting into the heads of their opponents and exposing their flaws for all to see. Additionally, this game plan frequently backfires, as more often than not they are ultimately the also-ran behind whomever they are paired against.

Another similarity between both men is their “king-maker” status; those they feud with and lose to, for the majority, go on to bigger and better things within the WWE Universe. But what would happen if these two manipulative and vindictive entities were pitted against one another?

Promos between Kendrick and Wyatt would, in my opinion, be a far more nuanced take on the current rivalry between The Eater of Worlds and “Woken” Matt Hardy. This particular program may be somewhat entertaining, but the overblown and ludicrously hammy talking head segments aren’t for everyone. If you want a Wyatt who is once again more credible and focussed, whose message is more relatable to a mature WWE audience, then look no further than The Brian Kendrick.

What was once a strength, Wyatt’s meanderings are now his biggest weakness, especially as he rarely delivers on his promise. This repeated failure has rendered him an ineffective villain in WWE’s overarching story. However, it would be interesting to see that scenario turned on its head, with the former WWE Champion being the recipient of intimidation and attempts at conversion.

Immediately after Wrestlemania 32, seeds were sewn for Bray Wyatt to become a fan favorite, cheered for altruistic goals rather than just being a cool bad guy. He may have still lived by sinister ethics, but his crusade could have been aimed towards the other evil-doers within the company. Injury hampered that possible Wyatt, but in this fantasy world, the possibility presents itself once again.

As for Kendrick, he wouldn’t allow Wyatt’s mind games to rain down on his parade. The Kendrick we’ve seen on 205 Live doesn’t bend to anyone else’s rule, and things wouldn’t be any different with Bray Wyatt in his crosshairs. We’ve seen many times now that Bray’s veneer can crack when up against a brick wall. Perhaps in this program, the wall would be one that he doesn’t bulldoze through and instead rises above and over it in valiant fashion, giving birth to the popular hero we were teased with nearly two years ago.

This pick may be considered a cheat selection by the NXT fans among you. Running in conjunction with Drew McIntyre’s eventual victory over Bobby Roode at NXT: Takeover Brooklyn III, the current Smackdown Live Superstar had a more passionate feud with Roderick Strong. So this match-up has been booked before. However this time around, I believe the pairing would feel fresh with both men’s moral alignments reversed. So consider this the next chapter in Strong and Roode’s story.

Back in 2017, in a series of vignettes detailing Strong’s tough upbringing, the Messiah of the Backbreaker was painted in a very sympathetic light. Strong is a very proud family man, as was depicted in these vignettes which showed touching photos of his wife and child. However, in a backstage segment, Bobby Roode laughed in the face of this family man image, taunting Strong with veiled threats of taking his wife as his own. Strong did not take kindly to this, and so, this heated rivalry was born.
Strong may have won this mini-war with an ultimate victory over Roode on NXT TV, but it felt like this played second fiddle to the crowning of Drew McIntyre. Additionally, despite Strong having the last laugh in their program, Roode is the one who is currently having fun with his “Gloriousness” on Smackdown Live. In contrast, Strong has only very recently found a goal he can truly strive towards in 205 Live’s Cruiserweight Championship Tournament, after months of toiling away in the background on the developmental brand.

Despite standing on the “babyface” side of the fence for all of his WWE career so far, hints of disdain have crept into Roderick Strong’s mindset in the tournament, with the disrespectful “Lucha” taunts aimed at his second round opponent, Kalisto. Could this lack of honor be an indicator that Strong has had enough of being a runner-up? That fighting the good fight just won’t cut it anymore?

And who better for Strong to aim his vitriol at than the man who has enjoyed the successes of United States Championship reigns and charity oriented exhibition tag-team tournaments, in some part at Strong’s expense? For all intents and purposes, Bobby Roode is a “face” on television these days, and a bitter Roderick Strong – who fought against the demons that can go hand in hand with a damaging upbringing, only for the less encumbered people in his profession to swagger to the front of the queue – would take considerable exception to the fun that Roode is having.
Therefore, although they have fought in the past, with the babyface and heel dynamic reversed this time around, I would be more than happy to see the sequel.

Mustafa Ali has been a firm favorite of mine since his crisp, high flying style had me picking my proverbial jaw up off my lap in 2016’s Cruiserweight Classic. I was disappointed with his early elimination, however, I grudgingly accepted that a stunning moveset without a deep-rooted and story driven match wasn’t what HHH et al were looking for. Barring the two to three-month feud with Drew Gulak in 2016, where his aerial offense was the reason of contention for Gulak, Ali hasn’t prominently featured on 205 Live as much as I would have liked.

AJ Styles’ accomplishments, even in WWE alone, speak for themselves. In just over two years, his narrative includes becoming both a two time United States and WWE Champion, two spotlight Wrestlemania matches, and already some memorable programs under his belt, with the likes of AJ Styles, Roman Reigns, and Dean Ambrose. Throughout the majority of this timeframe, he has been the shining light in a poorly managed Smackdown Live. All of this, and some pretty decent wrestling along the way.

For the sake of pure athletic prowess and big dynamic moves, this was a match I wanted on the list from the start. However, I couldn’t really think of why their paths would cross. Then it struck me. For this encounter, I would use the trope that WWE has used frequently in recent years where a champion offers an open challenge to anyone in the locker room who fancies their chances at stripping said champion of their title.

If Styles was to offer such an invitation, the 205 Live loyal would be over the moon to hear Mustafa Ali’s music play, knowing that a gravity-defying match was about to occur. At first glance, this could be a generic crowd-pleaser that we have seen often in recent times.

With this in mind, however, Ali has shown a far edgier side too since the Cruiserweight Championship Tournament began. He barely survived Jack Gallagher’s brutal and chronic assault, but with true grit and determination, he scraped through by the skin of his teeth. In his second-round victory over Buddy Murphy, he was on top for most of their encounter, targeting specific body parts with a newfound unapologetic intensity.

This newly realized confidence and self-belief would earn respect from AJ Style, who has battled against the odds as well, many times over. That respect would bring out the very best in Styles. He would delve deep into his bag of tricks to get one over on Ali who would reciprocate over and above his usual motivations.

This match would be a delight to the eyes, of course. But looking deeper, the story of the underdog vs the favorite, where Ali is looking to erase that description from public perception would be a sight to behold, and potentially earmark Ali for more chances at success in the future.

This concludes part two of three in my Cruiserweight vs Main Roster series. The picks for the final installment have yet to be finalized, or story fully realized, but in the meantime, let me know your opinions on the above match-ups. Feel free to drop your comments here or wherever you read this on social media. You can find me on Twitter and in Social Suplex’s Facebook group.