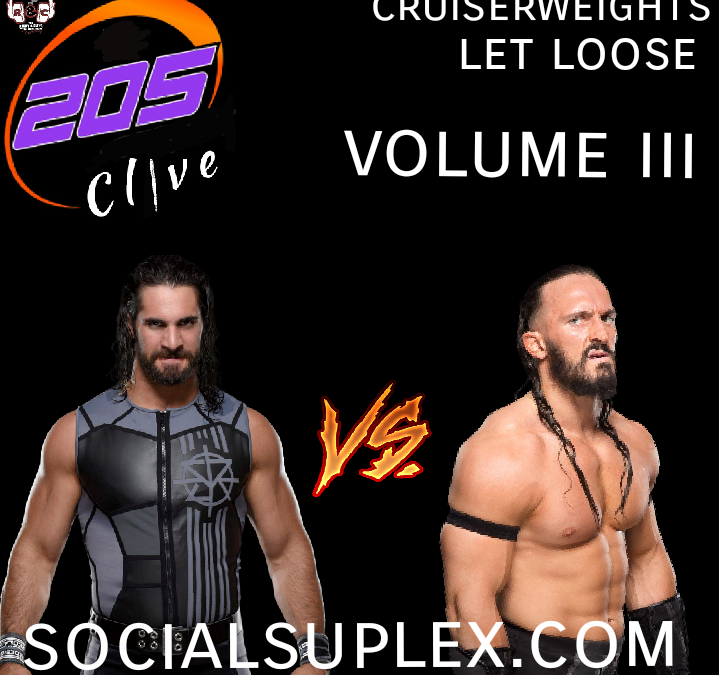 Welcome to the final installment of my “fantasy booking” mini-series, pitting members of 205 Live against Monday Night Raw and Smackdown Live wrestlers. If you missed parts one and two, you can read them in the links provided.

First of all, apologies for the later than planned release of this entry. With a new commitment to a weekly review of 205 Live, this series, unfortunately, took second place, due to the time-sensitive nature involved with the Cruiserweight show’s rundowns.

I also didn’t want to write the last entry in haste. I had a lot to write about these remaining rivalries, and a rush job wouldn’t have done them justice. So much backstory was considered, in fact, that only two feuds made the cut. Maybe this was because I had racked my brain to the point of creative exhaustion. Whatever the reason, I hope this “double main-event” makes up for the lack of a trio. So without further ado…

As has so often been the case throughout the history of WWE, rivalries that blur the lines between reality and fiction elicit a more engaged and continued interest from the audience. Bret Hart and Shawn Michaels. Edge and Matt Hardy. CM Punk and Jeff Hardy. These examples are, in some cases, now decades old. To this day, many professional wrestling journalists still attempt to unearth what really went on behind those scenes.

While this proposed tag team feud would be lower on the “heat” scale in comparison, it would be easy to tell a story that fans would believe had some element of truth to it.

That story, of course, is The Revival’s disappearance from Raw, almost immediately following their promotion from NXT. All momentum Dash Wilder and Scott Dawson had quickly accumulated was lost as Wilder suffered a broken jaw in tag team action against Hideo Itami and Shinsuke Nakamura at an NXT Live Event.

The circumstances surrounding the injury remain unclear to date. That’s not to say the nefarious double act couldn’t conjure up a recount that would play into the hands of their own self-important and bitter agenda, where they could claim that Itami’s finishing move, the Go To Sleep, was the reason for WIlder’s broken jaw. From that incident on, The Revival have suffered a terrible run of misfortune, specifically an even lengthier lay-off for Scott Dawson. Both are now fit enough to compete as a unit again, but their ascent to the top of Raw’s Tag Team division hasn’t been as easy as they probably envisioned.

The Revival could make themselves believe that Itami’s heavy-handedness was the catalyst for their continued bad luck and that Itami has no business being in WWE as a result. They could even present supporting evidence in the form of The Brian Kendrick’s fractured orbital bone, brought about by the same finisher.

With the Kendrick injury in mind, Itami went so far as to address the WWE Universe to explain that it was not, and is not, his intention to legitimately injure his peers. The same can’t be said for Dash and Dawson however, whose intent to permanently maim their opponents has been a signature trait since long before they even entered the NXT Tag Team Title scene.

The hypocrisy of Revival’s complaint is a textbook “heel” characteristic and would be the focus of Itami’s defense. His warcry for several months now has been a demand for respect. Revival’s protests, while they may have some merit, would be seen by Itami as a clear sign of dishonor.

Akira Tozawa admittedly doesn’t have much input into the scenario created above. However, he would still have a necessary role to play. Tozawa is a fan favorite on 205 Live. He easily gains adoration from the audience with his rapid attacking style and his hyperactive crowd interaction. On top of this, facing extreme adversity in the Nevilles, Drew Gulaks, and Brian Kendricks of the world, Tozawa’s skin will have thickened no end. He will see the evil-minded treatment of his tag partner and channel that fight-back mentality that made him a hit with the 205 Live crowds.

Again, this wouldn’t be the most infamous example of fans wondering how real is the animosity between Revival and Itami, but there would be a lot of convincingly proud egos in this rivalry at the same time, that disbelief could continue to be suspended. With that, there would be just as many combustible elements that could result in an ugly and tempestuous series of matches between the two teams.

Almost three long years ago, Seth Rollins was both The Authority’s “Chosen One” and the WWE Champion. During that same summer, he was entangled in a storyline with John Cena, who at the time was nearing the end of his popular United States Championship Open Challenges.

The Architect made it his mission to go one up over Cena at every turn. He took this a step further by issuing his own WWE Title Open Challenge, not without its roster diminishing caveats, of course, such was his cowardice at the time. Nevertheless, regardless of how specific these conditions were, Neville fit that bill perfectly and delivered a classic underdog performance against Rollins that saw The Authority’s lapdog almost regret issuing the challenge altogether.

A lot has happened to Rollins and Neville since then. As well as injuries hampering momentum, both embarked on personal journeys on completely opposite ends of the hero/villain spectrum. Seth won his war against evil, and Neville underwent a tyrannical transformation that was almost peerless in first its execution, and secondly in its continued consistency.

Since Neville’s sudden departure from WWE television, Seth’s fortunes have improved for him personally. Rekindling his brotherhood with Dean Ambrose and being in regular contention for the Raw Tag Team Championships have revitalized him. Even with tag team partners dropping around him through injury at an alarming rate, Seth recently took matters into his own hands, becoming a threat Raw’s singles division(s) once again.

Neville seems like he would be one to hold a grudge, to say the very least. With that in mind, he won’t have forgotten his loss to Rollins all those years ago. He won’t have forgotten also how Seth returned from career-threatening injury and, despite this, was Stephanie McMahon and Mick Foley’s number one pick in the 2016 Brand Extension. Lastly, he won’t have forgotten how his own return from injury was met with nowhere near as much fanfare as Rollins’. Because of the above factors, Neville had to take matters into his own hands with his resolute turn to the dark side later that year.

Neville may not have necessarily deserved the same trumpet calls as Seth; each Superstar has their place in the pecking order. However, knowing what we now do about Neville’s temperament, it’s very possible that such a bitterness would have eaten away at him over such a long time. The Man That Gravity Forgot would hold no reservations in unleashing that pent-up bitterness in The Architect’s direction.

One of Rollins’ great strengths currently is his ability to evoke an unwavering sympathy and support from the audience. The “babyface in peril” role is one he plays so effectively, as evidenced in his heroic display in the now fabled Raw Gauntlet match in February of this year. In contrast, the psychological warfare adopted by Neville, as well as his dissection of an opponent through carefully selected offense, all in preparation for executing his finisher with devastating effect (whether it be Red Arrow or Rings of Saturn), is an absolute masterclass in strategy.

The two men have walked on very divergent paths, and the in-ring psychology employed by both is a testament to that. If a ground-based, hard-hitting approach is merged with high flying action, and the build leading up to the match is an intense as predicted above,  there is no doubt in my mind this would be a match-up for the ages.

This concludes the “Cruiserweights Let Loose” mini-series. It has been a fun project and further enhances my impatience with the 205 Live roster being pigeon-holed into their own separate world within the WWE Universe. The show is still in its infancy, however, and with a new wrestling calendar comes new options for WWE management to consider.  I sincerely hope this is one of them.

As this is the finale, some readers may be disappointed that their personal favorites from all three brands aren’t on the list. That’s not to say I don’t appreciate their work. It’s purely a case of not being able to conjure up a suitable scenario at this time. But you never know. Characters may change. New creative opportunities may present themselves.

In the meantime, if you think I’ve missed a potentially classic program that I would regret not including, or if you see different creative directions in this series’ eight picks, share your thoughts on here, or wherever you read this.

You can find me on Twitter, Facebook, and in Social Suplex’s Facebook group. You can read more of my columns right here. Additionally, you can hear my opinions on all things WWE in “The Ricky & Clive Wrestling Show”, one of the shows that make up the ever growing Social Suplex Podcast Network.