Daniel Bryan vs The Miz: Professional Wrestling vs Sports Entertainment 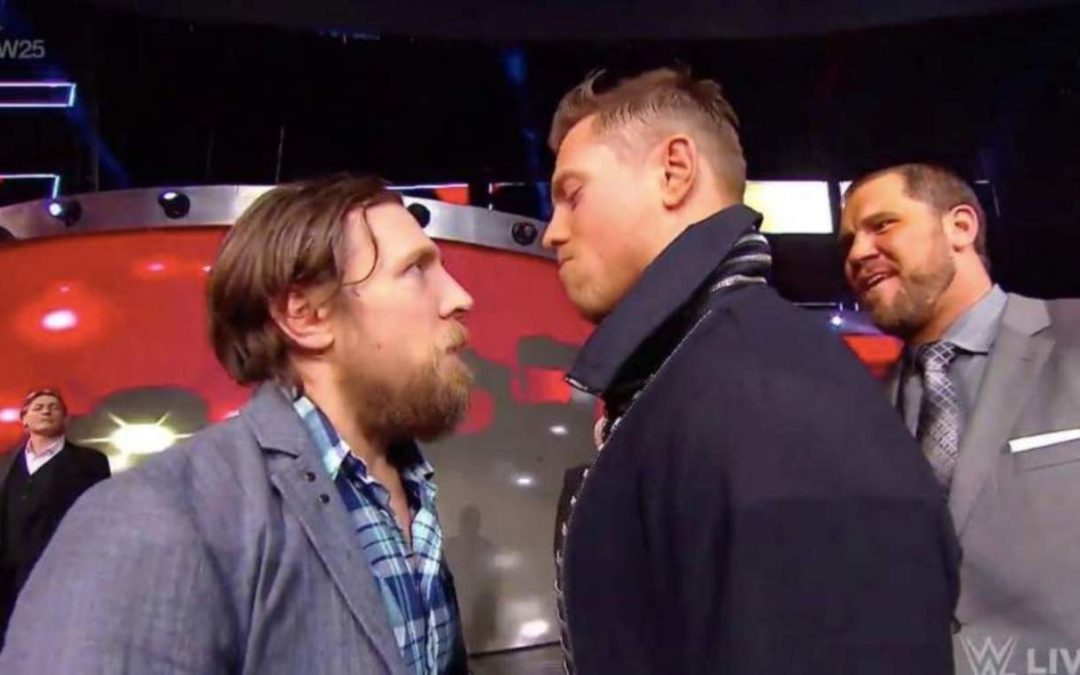 An argument has raged on for years now which divides opinion between WWE’s management and on-screen mouthpieces, and the company’s fanbase. “Raged” may be a strong choice of word, but it has certainly nagged at the hardcore WWE audience’s conscience since it was forcibly included into the company’s lexicon.

That debate is over what terminology is the correct one to use for the product that we all avidly consume; professional wrestling or sports entertainment.

According to Google’s dictionary, professional wrestling is defined as a type of entertainment involving wrestling matches whose progress and outcome are planned in advance, typically between performers with established character roles.

Sports entertainment is, according to Wikipedia, a type of spectacle which presents an ostensibly competitive event using a high level of theatrical flourish and extravagant presentation, with the purpose of entertaining an audience.

Someone with enough want to do so could analyze the above definitions’ nuances, but they are both essentially what we, the viewer, put many hours per week into viewing. At the end of the day, if it’s done well, does it really matter what WWE call it?

To further argue that last rhetoric, there are two wrestlers currently in WWE’s employ who encapsulate both ends of the spectrum perfectly. With these Superstars looking set to butt heads once again, in what has now become an overarching story to rival anything in the history of the business, Daniel Bryan and The Miz are both the perfect clash, and blend, of professional wrestling and sports entertainment.

Mike Mizanin is very much a product of the WWE machine. With an early comfort in front of the camera, thanks to his foray into the world of reality television, The Miz took to “sports entertainment” like a duck to water.

Many wrestling personalities believe that a character is at their best when they play themselves “notched up to eleven”. Upon some research, “The Miz” was already a persona that he conjured up during his time on MTV’s “The Real World”. Shortly after, The Miz was already in his element when he was a contestant on WWE Tough Enough. He may not have won outright that year, but he obviously had enough charisma and potential to earn himself a contract nevertheless.

Throughout his early career on WWE television, The Miz was still finding his feet (in my opinion) with the wrestling part of his job. Adopting a safe and uninspiring style, he failed to keep up with the breakneck pace at which the Superstars of the Ruthless Aggression wrestled.

The last few years have seen him become more than competent between the ropes. But during this time, Miz has also transformed into the “A-Lister”. This is easily his best incarnation to date. Along with many in the internet wrestling community, I hold my hands up and admit that The Miz has won me over. He very well may be the best sports entertainer in WWE today.

While Daniel Bryan is now one of the favorites among WWE’s fanbase, he first made a name for himself becoming a stalwart on the independent scene. Bryan Danielson immediately pursued a career in professional wrestling once graduated from high school, quickly embarking in learning from true veterans of the business in Dean Malenko, Shawn Michaels, and William Regal.

As well as occasional appearances on WWE as enhancement talent, Danielson was prolific from the outset. Stints in the Far East, as well as the independent scene in the USA, showed that Danielson was very passionate about, and wholly dedicated to, his profession.

The love affair he had with the wrestling underground would continue over the best part of a decade. He was not only considered by some to be one of the “founding fathers” of Ring of Honor, but an almost peerless legend in the company, such was the success of his time there.

It took a long time for Danielson, now christened “Daniel Bryan”, to become a full-time member of the WWE family. Ten years of blood, sweat, and tears finally paid off. In what was a relatively short time frame – from the drudges of a thrown together reality contest, to the very top of the mountain – Daniel Bryan was garnering such a frantic crowd reaction not seen since the days of Steve Austin. He may have been involved in some questionable booking and slapstick segments along the way, but without a shadow of a doubt, it was his skill in the ring which made him the name he is today.

I hope I have provided examples of how to differentiate between pro-wrestling and sports entertainment. But to hammer home the magic that can happen when the two ideals are merged as one, look no further than the masters of their respective craft’s interactions with one another.

Ironically enough, their first interaction came in the form of Daniel Bryan, already a veteran of the game, being mentored by The Miz (on the early reality show version of NXT), whose wrestling acumen wasn’t as accomplished as the role he was given would lead you to believe. Even in those early stages, including his eventual addition to the main roster, Bryan always seemed to gain the upper hand. This was a trait that would repeat itself time and again over the years.

Roughly eighteen months ago, however, The Miz upset the balance completely with his now infamous verbal assault of the then retired Bryan during an interview on Talking Smack. All those instances of Bryan getting one over on The Miz meant nothing at that moment. With Bryan’s medical situation at the time, it seemed like The Miz had had the last laugh. Since then, The Miz has become a key player for the company, whether on Monday Night Raw or Smackdown Live and has thrived as a result.

Fast forward to today, and Daniel Bryan has been medically cleared to wrestle. Before officially returning to in-ring action, his last act as Smackdown Live’s General Manager saw him acquire the services of his nemesis, to become a part of Smackdown Live as part of 2018’s Superstar Shakeup. It just so happens that Bryan made sure he would stay put on the blue brand.

Bryan has made it clear on social media that he looks to exact revenge on The Miz for all the wrongs that have been perpetrated in his name. With Wrestlemania now behind us, and new storylines paving the way towards Summerslam, the anticipation of a fresh bout between the two has the WWE audience salivating at the prospect.

To answer my question from earlier, I wager that it doesn’t really matter whether you want to call it professional wrestling or sports entertainment. This is a clash of two wrestlers whose ideals are diametrically opposed. These clashing ideals, in this instance, merge into one and could result in the feud of the Summer. Regardless of what side of the fence you are on. On this occasion, everyone’s a winner.

What do you think of all the contrasts and parallels between Daniel Bryan and The Miz? Would you have thought a few years ago that this would be a fued so hotly anticipated as it is? Feel free to drop your comments here or wherever you read this on social media. You can find me on Twitter and in Social Suplex’s Facebook group.

You can read more of my columns right here. Additionally, you can hear my opinions on all things WWE in “The Ricky & Clive Wrestling Show”, one of the shows that make up the ever growing Social Suplex Podcast Network.