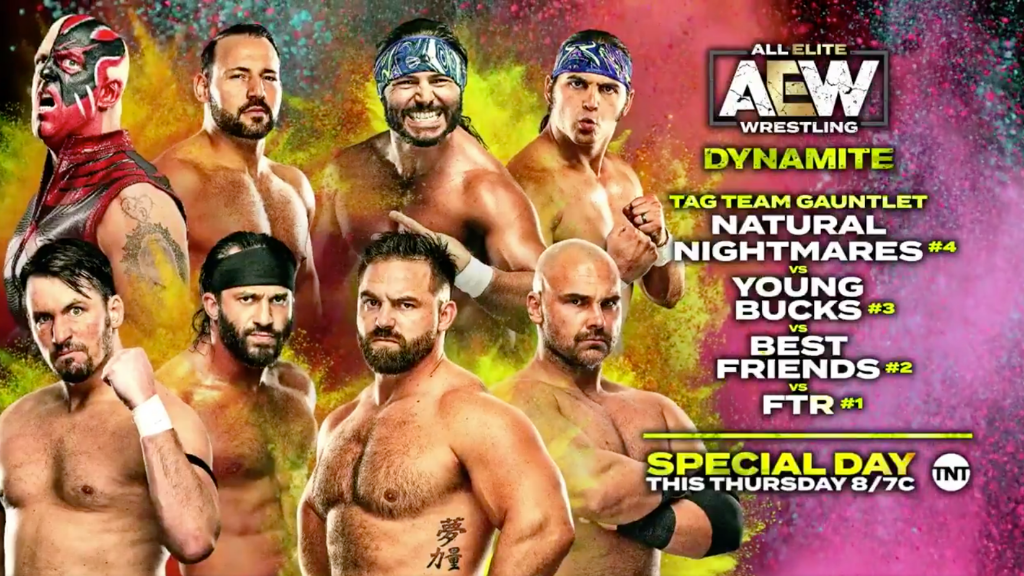 AEW’s special Saturday Night Dynamite was a big success. Once again this week due to the NBA Finals, AEW will be on a different night. This week Dynamite will be airing on Thursday night with a show loaded with segments building to All Out. Let’s take a look at the AEW Dynamite preview for August 27th

Last week, Chris Jericho interrupted Orange Cassidy’s first in-ring interview. Jericho challenged Cassidy to one more match. But not just any match…a Mimosa Mayhem match. Jericho explained in a Mimosa Mayhem match you can win by pinfall, submission, or throwing your opponent in a tank of Mimosa.

This match seems absolutely ridiculous, but Jericho has proven he can get anything over. With Jericho on commentary this week I’m sure we’ll see some form of retaliation from Orange Cassidy for the beat down he received last week.

Ladies and gentlemen, we have a new TNT Champion and his name is Mr. Brodie Lee. In the big championship main event on Saturday, Brodie steamrolled Cody in minutes to capture his first AEW championship. After the match, we saw the Dark Order demolish Cody and his Nightmare Family. I loved everything about this angle. It’s amazing to see how quickly AEW was able to turn the Dark Order around. I’m expecting this segment to be crashed by someone who will want to challenge Brodie at All Out. My guess is that it will probably be Matt Cardona. I’ll be fine with Cardona getting a PPV match as long as Brodie squashes him in the same fashion that he did Cody.

This week we’ll see a contract signing between AEW World Champion Jon Moxley and number one contender, MJF. MJF and his lawyer have it written in the contract for Moxley’s Paradigm Shift DDT be banned in the match.

We should get some good promos from Mox and MJF in this segment. I see Mox having no problems with signing the contract for this match. Mox has plenty of other maneuvers in his arsenal that he could use to defeat MJF. After the contract is signed I wouldn’t be surprised if MJF and Wardlow attack Mox. Followed by MJF laying out Moxley with a Paradigm Shift of his own.

After waiting for several months, Big Swole is finally going to get the chance to get her hands on Dr. Britt Baker. However, it won’t be one on one. Swole will also have to deal with Penelope Ford and Baker’s assistant, Reba. Even though the deck is stacked against Swole, I believe she’ll find a way to pull off the win.

Things between Matt Hardy and Sammy Guevara have gotten real heated in the last couple of weeks. A few ago Sammy put Hardy through a table and left him in a pool of his own blood. Hardy gave Sammy a receipt on Saturday by attacking with a chair and throwing off the stage through a table. This week these two will face off in AEW’s first tables match. Tables matches are not usually that great, but with the intensity of this rivalry, I believe it should end up being a good piece of business. I don’t think this match will be the end of the feud. I’m pretty we’ll see these two men clash again at All Out in a crazier match stipulation.

By the end of this week’s Dynamite we’ll find out who will be facing Kenny Omega and Hangman Page at All Out. The top 4 ranked tag teams will be facing off in a gauntlet match. The gauntlet will start with the #4 ranked Natural Nightmares facing the #3 ranked Young Bucks. The winner of that match will face the #2 ranked Best Friends. Then the winner of the match will face the #1 ranked FTR.

Most people are probably expecting the Young Bucks and FTR to be the last two teams. However, I have a hard time seeing AEW having the Bucks and FTR’s first match be at the end of a gauntlet on TV. It makes more sense to save their first meeting for a big PPV match. I think somehow the Bucks are going to end up getting cheated out of the gauntlet and we’ll see FTR versus Best Friends in the conclusion of the match. I’m pretty confident that FTR will be the winners here. The weird thing though about the Bucks not winning this match is they will end being off the PPV. It will be interesting to see what the fall out is from this gauntlet match.