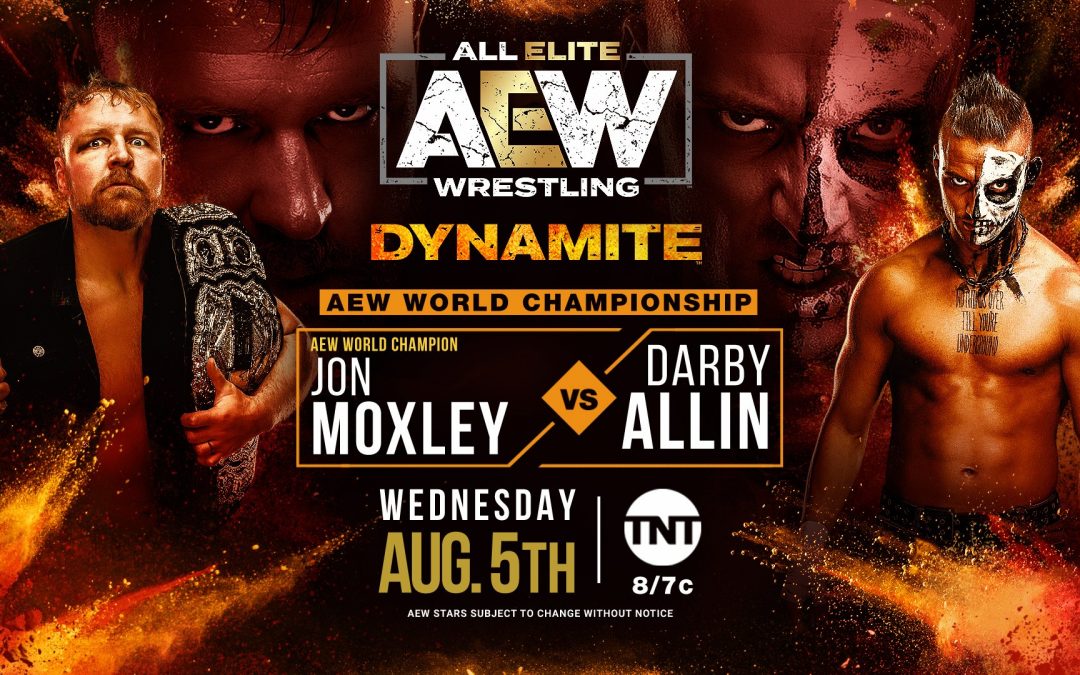 The road to All Out continues. All the AEW competitors will be looking to climb the ranks to ensure they get a slot on the PPV. This week we will find out who walks into All Out as the AEW World Champion. Let’s take a look at the AEW Dynamite preview for August 5th.

MJF Update on his Campaign to be AEW World Champion

I loved MJF’s delivery of this promo but, some of his points don’t make sense. He referred to Mox as “Dictator Jon” and placed the blame on him for not being featured on Dynamite every week. However, we’ve seen that Moxley is down to fight anyone at any time. If MJF just simply asked for a title shot, Mox would easily give him one.

MJF’s singles record is definitely deserving of a world title shot. He’ll get his chance to dethrone Mox at All Out if Mox successfully defends against Darby. MJF is a great talker so this should be another good promo segment. I’m looking forward to seeing him and Mox have a promo duel.

A week before their big rematch, Chris Jericho and Orange Cassidy will face off in a debate with a mystery guest moderator. The word on the street is Eric Bischoff will be the mystery guest moderator. I have no issues with AEW using Bischoff for a one-time appearance. Bischoff is a very good TV character and performer. I’m not expecting this segment to go long considering Cassidy doesn’t speak very much. I can see Jericho getting quickly annoyed with Cassidy and making this debate physical.

The battle between the Inner Circle and Best Friends will continue this week as Santana and Ortiz take on Trent and Chuckie T. The last four months, Best Friends have been one of the standout teams in the division. They’ve only lost one match since April 8th. They’ve defeated a lot of tough teams but haven’t had the opportunity to add Santana and Ortiz to their list.

The Elite & FTR vs. Dark Order

The Elite and the Dark Order have had issues since the end of last year. Since then, the Dark Order has grown with Brodie Lee at the helm. Brodie has been a great recruiter since he’s been revealed as the Exalted One. In the last several weeks we’ve seen him continue to groom Colt Cabana. Cabana claims he’s not a member of Dark Order but, he hasn’t left Brodie’s side since their first tag match. The Dark Order will be coming into that match as a united front under Brodie’s leadership.

At this point, it is very questionable if the Elite and FTR are on the same page. Since FTR’s debut, we’ve seen have a frenemy relationship with the Young Bucks. They’ve quickly become drinking buddies with Hangman. Despite Hangman being cool with FTR, his tag partner, Kenny Omega has had his issues with them. We’ve seen over and over again Hangman not wanting to be affiliated with the Elite. On BTE a few weeks ago, Hangman said he would always appreciate the Bucks, but he just doesn’t like them. One wrong move or one wrong look could easily see this team combust. If they plan on defeating Mr. Brodie and his cult they’ll no choice but to put their differences aside and work together.

Matt Cardona, the former Zack Ryder, made a surprise appearance on Dynamite last week to save his friend Cody from a Dark Order attack. 2011 Jeremy would have been excited to see the Broski get this opportunity. 2020 Jeremy not so much. Wrestling Headlines columnist and Social Suplex friend, Sir Sam wrote an excellent column explaining why Cardona isn’t Elite enough for AEW. I 100% agree with every point that Sam brings up.

I understand since the beginning of time, bookers and promoters have hired their friends regardless if they were qualified or not. I also understand that Cardona has a big social media following that could potentially bring new eyes to AEW. However, since day one AEW has promised to bring the best bell to bell action.

Cardona has never shown to be a stand out in-ring worker. Unlike other former WWE talent, Cardona was perfectly fine with his low position and had no desire to prove he can do more. He’s lacking that rebel spirit that guys like PAC, Mox, and Brodie Lee have.

Cardona is going to need more than just his social media following and action figure collection to cut it in AEW. Anytime he’s on TV, he has no choice but to bust his and ass prove how hungry he is. There is a locker room full of talent who are dying to get regular time on Dynamite. If we get the standard quo mediocre Ryder matches it will be a detriment to the locker room morale and Dynamite.

I will be surprised if somehow Silver and Reynolds were able to pull out the upset victory. Cardona will probably get the pin and then challenge Cody for the TNT Title.

I’ve seen a lot of people questioning Darby getting this title shot. What those people are failing to understand is that the AEW rankings work like UFC rankings. Anyone in the top five of a division can end up getting a championship match. Champions don’t always have to face off against the number one ranked competitor. Currently, Darby is the number five ranked wrestler and is eligible for a world title shot.

Even though Darby qualifies for a world title match I don’t think they should have booked this match. With MJF calling out Mox it’s very clear that Mox will retain and defend against MJF at All Out. So either Mox is winning or the match goes to a draw. Draws have been rare in AEW thus far and I don’t see them doing one here. This means that Darby will suffer another big loss. I know there are several people who think it doesn’t matter how many times you beat Darby because he’ll always be over. Darby is a great underdog, but at some point, he needs to start winning some of his big matches. He might stay over but fans will never truly believe he can win the big one.

After this match, all signs point to Darby facing Brian Cage at All Out. I highly doubt that Darby will win that match which will stack another big loss for him. Darby is one of my favorites and I believe he can be a top star for the promotion. To get to that star status he’s going to need some help from the booking.