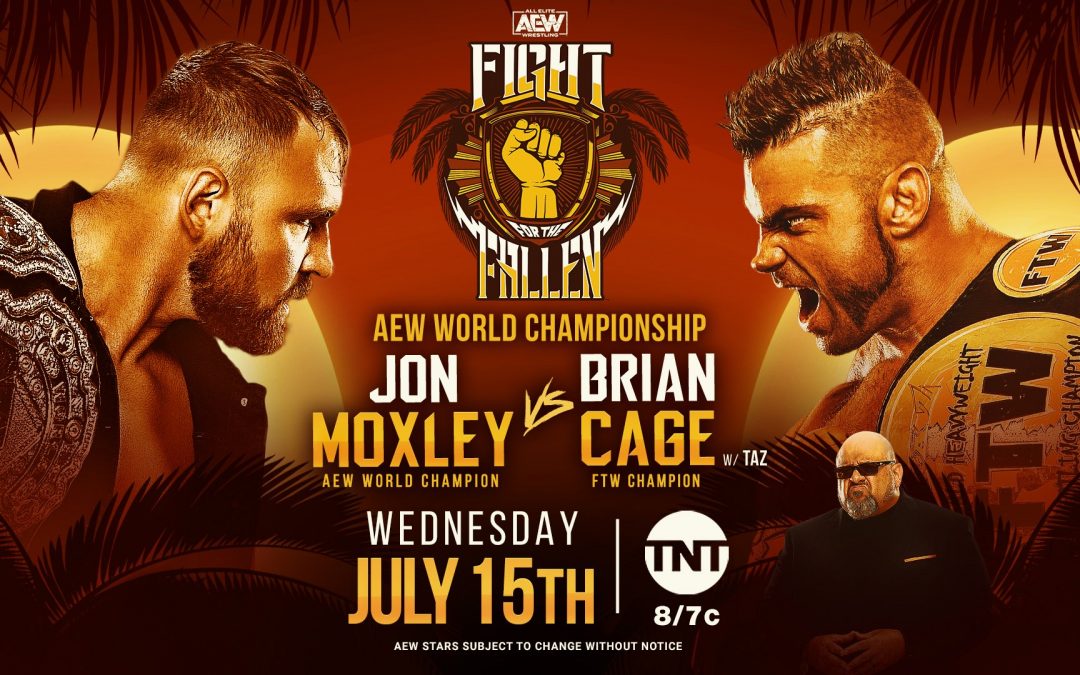 AEW is back with another pay-per-view style TV special. The two-week Fyter Fest event was a success. It produced some great matches, decent ratings, and advanced storylines. This week’s Fight for the Fallen card is stacked and could end up being better than both nights of Fyter Fest. Let’s take a look at what’s planned for this big show.

The Elite vs. Jurassic Express

I’m happy to see the Bucks and Kenny back in action together. Elite trios matches are so much fun to watch, especially when they’re facing off against another great trio like Jurassic Express. The Young Bucks will be looking to rebound after their loss last week against the Lucha Brothers, The Butcher, and The Blade.

Most people probably have the Elite as the favorites to win this one. However, I wouldn’t count out Jurrasic Express. We’ve seen time and time again that the Young Bucks don’t care about losing. Some intriguing booking options could come from Jurassic Express winning. They could have a straight-up tag match with the Bucks or they could challenge Kenny and Hangman for the titles. Although I like what could from Jurassic Express getting the upset win, I do think the Bucks lose too much. The Bucks need to start picking up some momentum if they want to prove to FTR that they are the best tag team in the world.

The Nightmare Sisters in Action

The Nightmare Sisters have been a successful duo on AEW Dark the last few weeks. Brandi and Allie have been able to put their differences aside to get some wins. As of now, it seems like Allie’s love for QT is real and she is slowly earning the Nightmare Family’s trust. I’m not quite sure which direction this story is going in. I just hope Allie doesn’t break my boy QT’s heart.

After a week off, the TNT open challenge is back. This week, Sonny Kiss will be challenging and trying to dethrone the American Nightmare. Sonny Kiss is super talented and has greatly improved since his AEW debut. With this being his first singles match on Dynamite I’m sure he’s going to show out. I hope this match will be laid out similarly to the Cody/Darby matches. I’m not expecting Sonny to get the victory, but a competitive match against Cody will raise Sonny’s stock in the promotion.

The Lucha Bros. vs. FTR

FTR versus the Lucha Brothers is a dream tag match for several wrestling fans including myself. Since FTR arrived in AEW, they’ve made it clear that one of their goals is to make all AEW teams follow the rules of tag team wrestling. They have identified the Lucha Brothers as one of the division’s biggest offenders.

The Lucha Brothers are accustomed to wrestling under Lucha tag rules. With Lucha rules, when your partner gets knocked out the ring you can immediately jump in the ring and become the legal man without a tag. Also, there is no emphasis on holding the tag rope and there are no strict rules for how long both partners can be in the ring. Pentagon and Fenix have had to work hard to adapt to the AEW tag team rules but hold habits die hard. Personally, I’m not a stickler for the tag rules and love to see the Lucha Brothers run wild.

It will be interesting to see how these two teams’ styles mesh together. FTR will be bringing the traditional southern style to compete against the Lucha Brothers’ high flying offense. FTR and Lucha Brothers are two of the best tag teams in the world, so this should end up being a great match. I’m expecting FTR will pick up the win and remain undefeated in regular tag matches.

The wait is finally over. After being delayed a week, we’re going to see Jon Moxley and Brian Cage lock horns. The build-up for this match has been great. Taz has been excellent in his role as Cage’s manager. He has been one of the key elements that have made this feud so great.

I’m having a hard time predicting the outcome of this one. Since Cage’s debut at Double or Nothing, he has decimated anyone who has got in the ring with him. He’s undefeated and has been built up as a credible challenger. I have a hard time seeing him lose so early.

Jon Moxley has been a great champion and has been a ratings mover. I think it’s too early in his championship reign for him to lose. They could do some type of draw. This would allow both men to remain strong and can set up a potential rematch at All Out in September. We’ve seen draws done well in AEW, but I’m not sure if they would want to do that for a world title match. At the end of the day, I don’t think Jon Moxley is leaving Jacksonville without the AEW World Title. Regardless of who wins, this should be one hell of a main event!