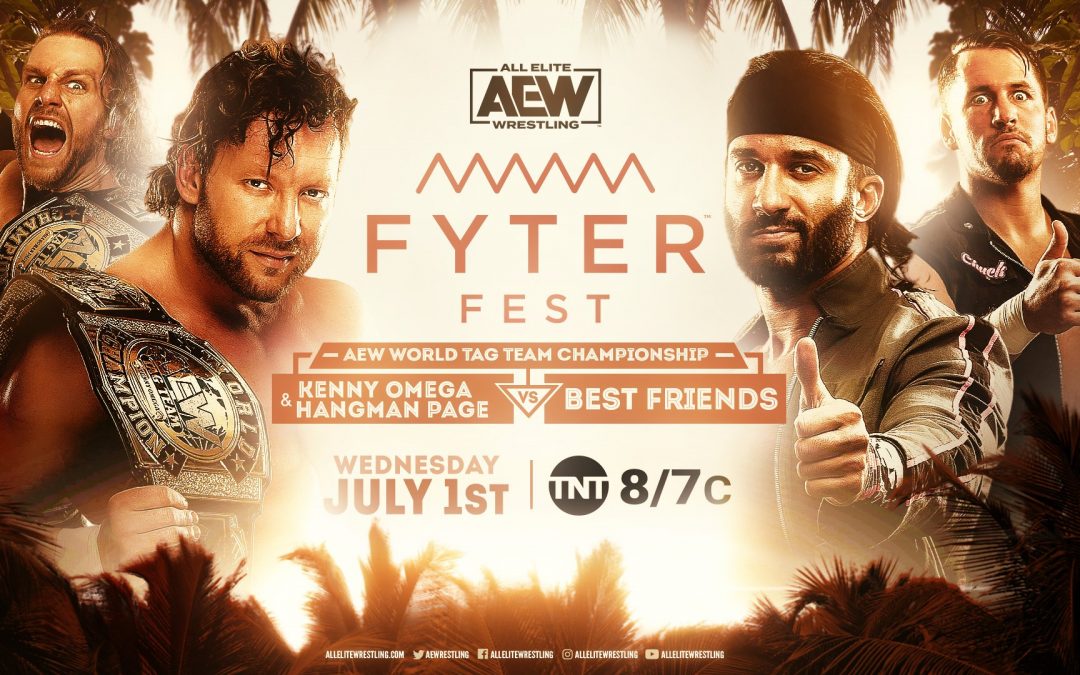 Night one of Fyter Fest 2020 is just two days away. AEW has done a great job building to Fyter Fest and it legitimately feels like we’re getting Pay Per View caliber cards. Let’s take a look at what’s scheduled for this Wednesday.

Chris Jericho Will Be On Commentary

Chris Jericho was great on commentary a couple of months ago during the tapings in Georgia. He and Schiavone had instant chemistry and were a great duo. AEW tried to recapture the Jericho commentary magic a few weeks ago but it wasn’t quite the same. The second time around Jericho was joining the normal three-man booth. Having Jericho with the three-man booth was a little distracting and shifted the natural flow of things.

I’m sure having Jericho on commentary during night one of Fyter Fest will lead to some kind of angle between him and Orange Cassidy. Jericho will be entertaining but I would be totally fine with Excalibur, Schiavone, and JR being left alone to do what they do best.

The rivalry between these two teams has been brewing since February. The dastardly duo of MJF and Wardlow are coming into this match will all the momentum. MJF has two singles victories over Jungle Boy and last week Wardlow defeated Luchasaurus in a Lumberjack match.

I believe this match has the potential to be a show-stealer. Jungle Boy and Luchasaurus desperately need to pick up a win in this feud. If Jurrasic Express wins it will be interesting to see who ends up getting pinned. MJF is currently undefeated and it seems like they are waiting for the right time to put him in a title program. Wardlow has only lost one match and has been a wrecking ball in the ring. If MJF is not going into a title feud after Fyter Fest, then I think him eating a pin here would be good. This would accomplish giving Jurassic Express a big win and MJF a reason to have his sights off of a title match. We’ve also seen dissension teased between MJF and Wardlow. A loss here can also further develop that story.

Last week after “Broken” Matt Hardy defeated Santana, he was quickly attacked and laid out by Santana and Ortiz. Private Party then made a beeline to the ring and saved Hardy from any more damage. Now Private Party will be looking to get some revenge on behalf of their new mentor.

The last time these two teams faced was on the November 20th edition of Dynamite. That night Private Party were the victors. I don’t think lightning is going to strike twice for Quen and Cassidy. Since returning to AEW after a few months hiatus due to COVID-19, Santana and Ortiz have not picked up any big wins. I think on this night we’ll Santana and Ortiz get the big win they’re looking for and get back on track in the tag division.

The rivalry between Hikaru Shida and Penelope Ford has escalated quickly. Last week, Shida was a woman possessed and wanted to get her hands on Ford. After she quickly defeated Red Velvet, Shida jumped in the crowd and went after Ford and anyone that got in her way.

Ford is a great athlete and has improved a lot since her AEW debut. Being in the ring with the more experienced Shida will be great for Ford. This should be a fast-paced hard-hitting affair. With Kip Sabian lurking at ringside, I’m sure we’ll see some interference that will lead to some near falls for Ford. However, at the end of this match, we’ll be seeing Hikaru Shida’s hand raised.

I’m going to be completely honest with you guys. I’m not thrilled about this matchup. Post-WWE Jake Hager has been uninspiring. His street fight with Mox was hyped up to be a great match but it fell flat. Part of the problem with Hager is that he’s constantly being paired off with other former WWE guys he has wrestled already. So he falls into the same old routine that he’s accustomed to. If he was given a chance to wrestle someone like Omega or Darby I think we could get something to sink our teeth into.

Both of these men have great amateur wrestling backgrounds which could lead to some good grappling towards the beginning of the match. However, with this being a big Cody title match I expect we will get a lot of Cody shenanigans. We’ll probably get interference from Arn and the Inner Circle, Cody bleeding, and a table spot. Hopefully, this match will end up exceeding my expectations. I’m expecting Cody to retain here and continue to establish the TNT Championship as a top title.

Best Friends have had a bumpy road on the way to the number one contendership for the AEW Tag Team titles. They’ve scratched and clawed their way to the top. Now they have their chance to win tag team gold for the first time ever.

Since Hangman has returned from quarantine, he and Omega picked up where they left off. They have been a well-oiled unit with no dissension. With Omega and Hangman on the same page, they’re an unstoppable duo. This should be a great back and forth match that will ultimately end with the champions retaining.