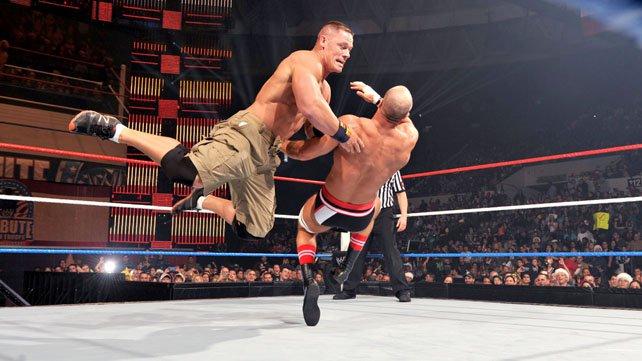 Over a period of time, I’ve been asking various members of Social Suplex from podcasters to other contributors like me what their “5 Moves of Doom” would be. I’m an indecisive person and I’m always fascinated by people who have quick and strong preferences so I tend to annoy some people because I may ask too many probing questions. I’m assuming it comes off as judgmental but really I’m interested in why people have the tastes they do or what draws them in towards whatever the subject matter is.

If you google “5 Moves of Doom” you should land upon a TV Tropes page which defines it as follows:

“Just about every wrestler has a Finishing Move. Some wrestlers, however, have an entire finishing sequence — a series of moves done in the same order to cap off every match. Though the sequence may be interrupted, the wrestler always seems to return to it at the earliest opportunity. If they don’t get a chance to return to it though, they’re probably going to lose the match.”

So I went about asking as many people in Social Suplex as I could and some of the results were very interesting. People’s tastes and opinions can tell you a lot about them and it’s in our differences we can expand our horizons. Some people got a special 6th move they would pull our for a special show once a year and I allowed it. It only expands upon what makes them unique. So if Social Suplex was a wrestling federation these are the types of wrestlers you would see:

Jeremy’s choices just gave me instant Eddie Kingston vibes with his back fist.  Then the rest of his choices just screamed indy or an ROH wrestler in 2010-2014 maybe.  I can see some possible influences from El Generico and the obvious influence of Johnny Gargano.  I’ll touch on the V-Trigger later.

I expected a lot of MMA and shoot style choices from Josh so I wasn’t surprised by the palm strike, rear naked choke, or the strike combo.  The top rope moonsault knee drop was unexpected.  I went back and watched Shibata vs Okada after thinking about his choices here.  I’m thinking that’s the type of wrestler Josh would be.

Another spinning back fist here and then a head kick.  This is followed by two specific suplexes and a Tombstone.  A very unique wrestler here and I can’t think of another wrestler to compare this to.  This comes across as a no-nonsense type of wrestler.  Possibly a tall wrestler like Lance Archer or Brodie Lee?

Take note of the second V-Trigger on our list.  Then he also has two specific suplexes just like James.  Maybe they would be tag team partners?  If you know RLPW (Rich Latta Pro Wrestling), then you shouldn’t be surprised with the Super Kick but you might be surprised that the only “Flippy Shit” move is the special 6th move.  Though it is a cool one.  Again I was a little surprised by the choices.

Some very old school move choices here and very bruiser-esque.  This would be some type of enforcer in a faction or hired gun.  I don’t see too many body slams as a signature move unless I’m watching Stardom or a Young Lion in New Japan.  I’m assuming its more of an 80’s type of wrestling move choice.  Personally I’m actually a really big fan of the pendulum backbreaker myself.  I wish more people would use it.

Get in the Ring

So far the most high flying choices of them all.  This was what I expected Rich’s list to look more like but DJ Dkooks picked some really cool moves with the Fosbury Flop and Steiner Screwdriver.  This would be a type of wrestler that just whoops your ass and then tops it off with some amazing agility with the 450 splash or Poisonrana (which is also a move I’ve grown to like a lot myself).

This is the 3rd V-Trigger so far and it’s accompanied by a Kitaro Crusher, so you know Kenny Omega was an influence here.  Then some other popular finishing moves with the Penalty Kick and GTS.  Very snappy and striking moves that would pop me.  This is a wrestler that would have been over huge in Lucha Underground or New Japan.

This is like if Jon Moxley fused with Bradshaw and Brock Lesnar.  Just a roughneck ass-kicker here.  No fancy stuff just strong strikes, two german suplexes, and a Double Arm DDT to put them out.  But it’s still a fairly simple move set so you could see this wrestler in any promotion and the moves could get over depending on how they were utilized.

Muzza gave me three sets of moves and while that was incorrect it did paint a picture of the whole wrestler’s career and the various stages of their move set.

If that wrestler was Chris Jericho and he started as a Young Lion before going to WCW.

He claims it’s all he would need so I’m guessing this is the Bruiser Brody version of Jericho that first showed up in New Japan to challenge Kenny and later fought Naito.

And finally mine.  I love the spots involving wrist control from the Ripcord Clothesline we call the Rainmaker to Ibushi’s Kamigoye so I incorporated a move that just involves gaining that control then I can have some vicious kicks into a Jumping knee to distinguish it from a V-Trigger as we already had 3.  Poisonrana is dope and Kenny also does that.  Then a few submissions followed up by the bicycle Yakuza kick for another strike that I felt was unique enough.  What can I say I love strikes and Submissions.

But one pattern I think I want to point out was all the V-Triggers.  I think it says alot about the Influence Kenny in particular had on this experiment.  Then you have Jericho with Muzza as another example.  People will always argue about who’s the best but my theory is that the best wrestlers are the ones everyone wants to emulate whether we realize it or not.  There’s storylines that suck us in and fun gimmicks but at the end of the day we still need some hard hitting and exciting combat.  Combat with unique and cool moves that bring out the kid in us.