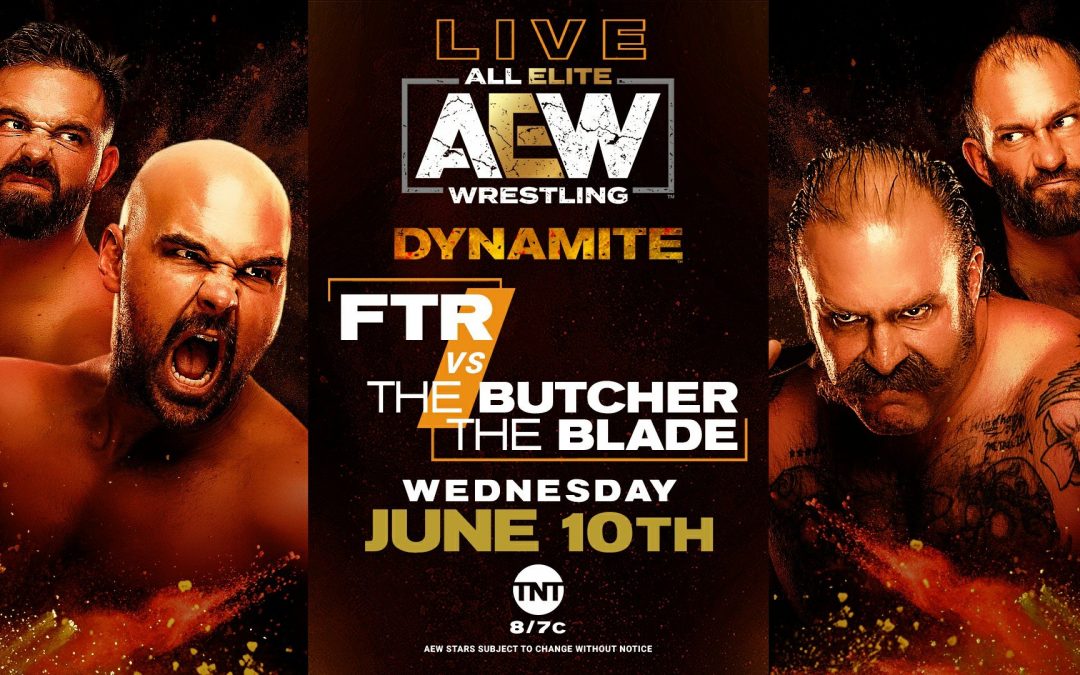 Welcome to my first AEW Dynamite preview column here on Social Suplex. Going forward every week I’ll be previewing and giving my thoughts for Dynamite. I’m looking forward to this week’s episode which features the in-ring debut of FTR.

FTR vs. The Butcher & The Blade

It’s finally happening. The AEW in-ring debut of FTR. Two weeks ago, FTR made a surprise appearance saving their long time online rivals The Young Bucks. Dax and Cash made a statement by quickly disposing of the Butcher and the Blade and refusing to shake the Bucks’ hands. In an interview with Tony Schiavone on last week’s Dynamite, FTR made it clear it’s their goal to prove that they are the best tag team in the world. Butcher and Blade barged in after the interview looking to get some revenge on FTR.

Those two altercations have set up this match and these two teams will clash on Wednesday. This is an interesting match considering both these teams seem like heels. The last two weeks FTR have been tweeting about teams not following the “rules” of tag team wrestling. I expect this match to be used to spotlight FTR and allow them to display their vision of what tag team wrestling is supposed to be. The game plan should be for FTR to work their way through the whole division until the Young Bucks are the only team left for them to face.

Orange Cassidy has found himself on the hit list of the Inner Circle. Last week Cassidy escaped an Inner Circle beatdown and retreated into the arms of Trent and Chuckie T. Inner Circle are coming off the Stadium Stampede loss and many think they should get the win here to pick back up some steam.

However, Best Friends are the number one contenders for the AEW Tag Team titles. It wouldn’t make sense for them to lose before their big match coming up at Fyter Fest next month. Also, it seems that they are setting up a Chris Jericho/Orange Cassidy match for Fyter Fest. I’m expecting to see Cassidy get the upset pinfall on Jake Hager which will drive Jericho nuts and add more fuel to this rivalry. Regardless of the result, this should be a fun one.

Colt Cabana had a solid match with Chris Jericho last week where he came up short and fell to the deadly Judas Effect. This week Colt will face off against Jericho’s protege, Sammy Guevara. Since the Inner Circle formed, it’s been very clear that Sammy is the pin eater of the unit. He’s had a ton of impressing performances but hasn’t had many singles victories on a Dynamite.

I believe Sammy has the skills to become a future main event star for AEW. He needs to start picking up some Ws soon so fans don’t see him as just a pin eater and the low man of his faction. Colt has proved in his short AEW stint that he can still go and pull some tricks out of his bag. This should be a fast-paced high flying bout hopefully ending with Sammy getting the win.

It’s week two of Cody’s TNT Championship Open Challenge. There were a lot of mixed reviews about the championship match last week with Jungle Boy. I rated the match 3.5 stars. I thought it was a good TV main event, but it could have been better. The match was plagued by Cody shenanigans. Cody says the point of the open challenge is to prove the naysayers wrong and show that he can go bell to bell. He failed to do that last week as he resorted to blading and a table spot.

This open challenge is going to get old quick if Cody keeps using all these smoke and mirrors every week. Hopefully this week the match will be more focused on the in-ring action and allow Marq Quen to shine. I know a Quen win here is not likely. However, I’ll be sitting on my couch sipping a black cherry White Claw cheering for Quen to get the upset win.