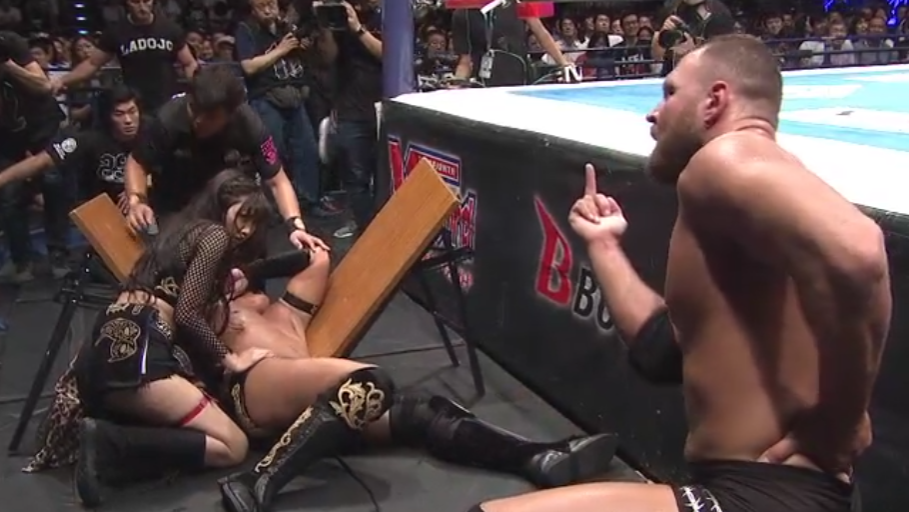 Anyone who isn’t on the NJPW payroll can tell you it has its flaws. These flaws can be aesthetic like failing to acquire the rights to play a wrestler’s entrance music. Sometimes they can be legitimate gripes the fans have like not knowing a card before tickets go on sale. Others are more impactful like failing to get visas so they can work in America.

However, one of my favorite things that keeps me on board with the product is their booking. Even if one of my favorites loses I know its not the end of the world for them. They’ve recently rebuilt Yoshi Hashi up (as best as anyone can) and the announcers have done such a good job telling the redemption story of Goto that his defeat of Jay White was not hard to believe.

Wins and losses do matter here but this is the same promotion where Sanada can be 0-5 against Okada without feeling like a bum or jobber. They know what they’re doing and the G1 is admittedly the hardest thing for me to predict but I’ve started to notice certain storyline seeds they tend to plant.

Usually, a win over a champion considered an upset or upward momentum for a wrestler can line them up with a title opportunity later after the G1. Feuds can also be ignited if a story is told well enough in the ring as well.

Not all these seeds cultivate into a crop they harvest but the seed is planted for them to come back to if needed and I think that is part of the genius in this booking. In just two weeks and the first matchups for each block, I think Gedo has already set up a championship opportunity for almost all titles. I’m going to go over each one and point out the potential story to see how many (if any) I successfully predict.

Zack Saber Jr. has said he’s made it his goal to beat Okada in the G1 and I think he actually might do it to set up a match later. While this title shot I believe is going to happen I’m not sure when.  It may be too bold to say it would be at Wrestle Kingdom as most people feel its past due time to pull the trigger on Naito and currently I feel they can do both. Give ZSJ a title opportunity at another show and give Naito a shot at the title at Wrestle Kingdom if he wins the tournament.

I don’t think Naito is going to actually hold both the IC and HW titles at the same time but I do think they might move him away from the IC title eventually.  I feel the narrative of him hating the title for eclipsing his match with Okada at Wrestle Kingdom 8, winning it and abusing it, to finally having its presence help him defeat Jericho at Wrestle Kingdom 13. What more can be said of this title?  He’s already defended it plenty and if he’s to beat Okada later then who’s going to be good enough to beat him now?

Well, he can lose from the master thief Yano.  He won’t be beaten but could Yano’s less than legal methods of victory over Naito be a foreshadowing of a future title match?  This may be too much but we could see Naito stealing it from Yano just to transition it to another wrestler like Minoru or even a Goto later.

A cheap and quick roll-up can help Naito not lose too much face in defeat and free him up for more opportunities at the HW title later.

They are doing a good job of making Juice look more dangerous and vicious than in his first match with Jon Moxley. His first block matchup against Shingo was a war that did everything in its power to show off how explosive and strong style he can be. But as with Naito, I think Juice has held the US title long enough for now.

This next prediction depends solely on how long John Moxley’s commitment is. If he isn’t going to be around much longer after the G1 then yes Juice will most likely win it back. However, if Mox will stick around a little longer I can see Taichi getting a shot and gaining the title.

Taichi could use a win after losing his title to Ishii and in that war, Ishii brought out the best in Taichi that we don’t always get to see. Plus the camera did catch an interaction with Mox mocking Miho Abe and while Taichi doesn’t care about anyone but himself, that little interaction leads me to believe there is something to come back to here.

This actually goes back to the match between G.O.D. and R3K on the first night of the G1.  G.O.D. promptly beat R3K and I think there is a story to come back to with them getting another shot and giving it their all and showing their fighting spirit. They don’t need to win but with the current underlying story of the lightweights challenging and beating more heavyweights lately with Shingo and Ospreay, this could help mix things up a little bit.

They don’t need to win but its this or G.O.D. vs Evil and Sanda again.

Ishii and Cobb again.  This can’t be a one and done match.  This was the match of the night and there is no reason Cobb can’t hold this title.  When Cobb first arrived he wasn’t as established as he is now.  He had the ROH TV title up until May 9th and has been making big waves outside of NJPW.

Let them go to war again. It really doesn’t even matter who wins this is just too awesome to not make a serious out of.  You could have Cobb win the second rematch or even go long term depending on how long of a commitment Cobb is willing to make. You could have him go 0-2 with Ishii only to finally vanquish Ishii on their 3rd matchup.

This one is obvious. Ospreay is Ryu and Shingo is Ken. Ryu is training and fighting the best to become the best and Shingo refusing to fall behind to Ospreay has entered himself in the same tournament against heavyweights because he believes that gave Ospreay the edge he needed to beat Shingo at the Best of Super Juniors. Should be a potential match of the night at the next Wrestle Kingdom.

I’m simply hoping Hiromu is back teaming up with Bushi to take on ELP and Taiji by the time Wrestle Kingdom is back. But they do have the Robbie Eagles vs. ELP and Taiji storyline to go back to. I’m just not sure who from Chaos or Sekigun would team up with Robbie. If Robbie does find a partner I don’t see them winning though.

There are whispers that Goto, Kenta, and Shibata could be forming their own faction with the LA Dojo and they have pointed out striking things like Goto wearing the LA Dojo shirt or Shibata watching a match at the G1 from the audience this could turn out to be true. How cool would it be if Moxley joined as well?

Moxley joining is a stretch admittedly but he would fit in.  But I could see the three of them taking on Taguchi, Makabe, and Yano to take the titles later.

This is all contingent on if this rumor or speculation is true and it’s unlikely. NJPW might be in store for a new faction but this would be reaching quite a bit.