The Guide To The Slammy Awards : Everything You’ll Love, Hate, and They Forgot 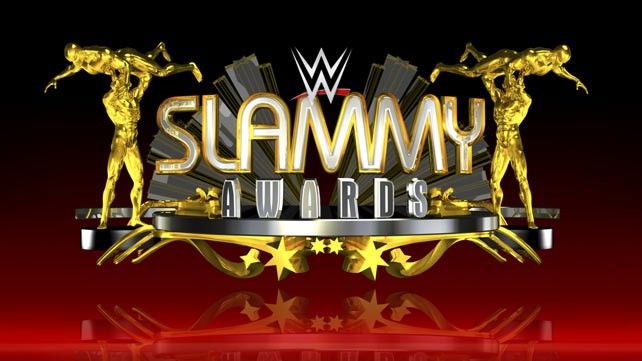 ​The Slammy Awards are an institution in WWE. Owen Hart once based his entire gimmick of the event. Fake awards; for a fake sport is ridiculous in theory, but somehow it makes all the sense in the world, as we “vote” on the years best stars, matches, and happenings. WWE encourages us to participate in the voting process, often to mixed results. The collective groan of fans online due to John Cena winning Superstar of The Year in 2012, put the entire process under scrutiny.

At times, no brainer nominations would be disregarded due to backstage agendas, but last year WWE couldn’t afford to stuff the ballot box with Daniel Bryan or they risked alienating the entire concept. The Slammy Awards are a work with elements of a shoot. So it’s time to preview the awards that are being given out this year, what you can expect to win, what should have probably won, what will piss you as a fan off, and inevitably what they forgot. After reading this you have two choices, agree or harass me with hate mail @DangerRich32. Lets Dive In.

Match of the Year

Who Should Win – Daniel Bryan vs Batista vs Randy Orton 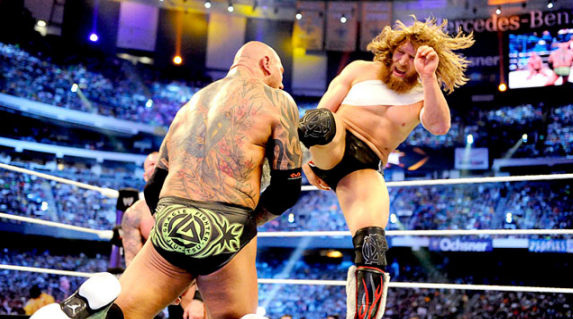 It was a WrestleMania main event that lived up to the hype. It was a great storyline, the match was straight out of the attitude era due to it’s sick spots, drama, a sense of fear in the building, the celebration, outside interference, and it factor. Even though HHH vs Daniel Bryan may have been superior)

Who Will Win – John Cena vs Bray Wyatt 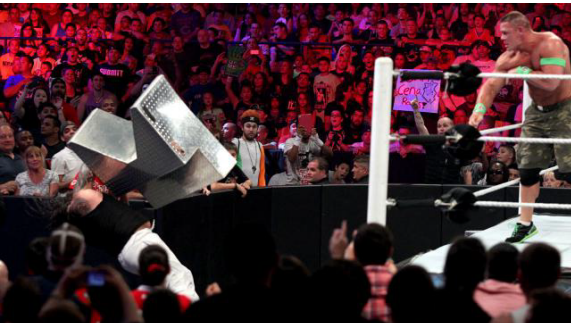 Well, none of the guys that headlined WrestleMania are on TV right now, barring a shocking Orton return. Wyatt won’t accept the award, but Cena will probably win something that night.

What Will Piss You Off – Team Cena vs Team Authority

Its too new, we haven’t had time to appreciate it yet. 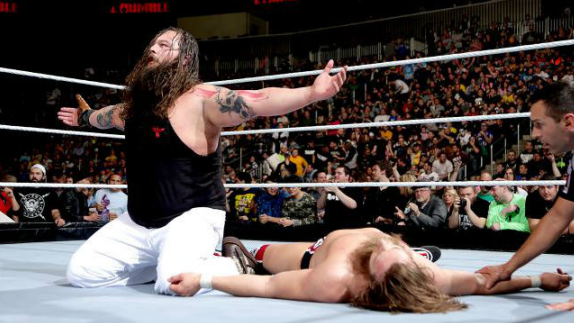 The Shield Vs Wyatt Family I – The first encounter between two, now defunct legendary factions.

The Usos vs Luke Harper & Erick Rowan at Battleground – Being there live experiencing that match was a moment I’ll never forget. Here are the highlights.

WWE Superstar of the Year

Who Will Win – Brock Lesnar

He Ended The Streak, Won The Championship in the most dominant fashion ever, Destroyed Big Show, and hi-jacked the WWE Title, it’ll be served to piss everyone off that he won’t even show up, adding to his heat.

Who Should Win – Daniel Bryan

Even missing 7 months he captured the imaginations of crowds everywhere, from the Internet to the casual fan. Main eventing WrestleMania, and wrestling twice there, makes up for his injury. We’re in a world where the world champion never wrestles anymore; I can pick an injured guy for superstar of the year.

Who Will Piss People Off – John Cena

Why? Because he’s John Cena. Half of us like me, will argue his merits, and resume that spans the complete year, while others will bemoan his status while not appreciating the workhorse he is.

What They Missed – Randy Orton

Another guy with a case for Wrestler of the year, due to his stellar PPV performances. Greatly turned around a shaky start to the year around Summerslam and kept it going until he was written off TV

WWE Diva of the Year

Who Will Win – AJ Lee

Nikki is the champion, so AJ will get this in a way to push their feud.

Who Should Win – Paige

She wasn’t God’s gift to women’s wrestling as people said, but start to finish she has a solid body of work with multiple title reigns.

Who Will Piss People Off – Either Bella Twin 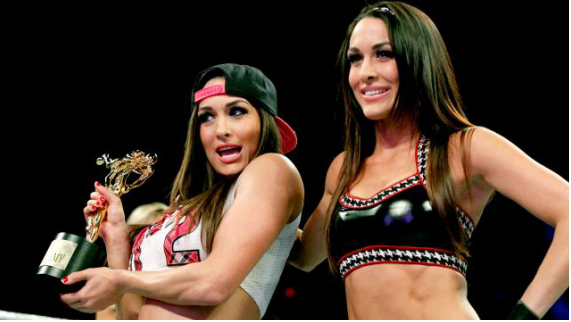 The internet hates the Bella Twins and refuses to acknowledge them being the most interesting and developing divas of the past year. People will ignore the fact that both of them are light years ahead of where they were, with Nikki just missing the cut for Diva of the year simply for starting her heel run so late. You probably hate them for dating/marrying John Cena and Daniel Bryan. But AJ’s love life flew under your radar.

What They Missed – This is Charlotte’s award the moment she’s called up from NXT.

LOL Moment of the Year

1. Damien Mizdow as The Miz’s Stunt Double
2. Mr. T thanks his mother at the 2014 WWE Hall of Fame
3. Vickie Guerrero throws Stephanie McMahon in a pool of pudding on Raw
4. El Torito vs. Hornswoggle – WeeLC Match at Extreme Rules

Who Will Win – Damien Mizdow as The Miz’s Stunt Double 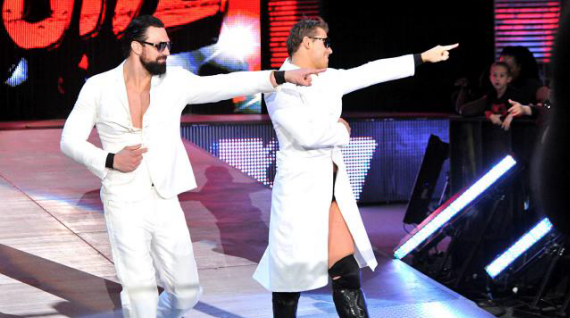 It saved Damien Sandow’s career. His comedic talents bounce perfectly off of The Miz. Our love of Sandow is simply due to the large dislike of The Miz. Miz is Excellence.

What They Missed – Dean Ambrose as “The JumpOut Boys.”

Dean Ambrose built his push around hopping out of random places or things to attack opponents (Like The Jumpsuit Boys of a bad neighborhood), and in each instance it was knee-slapping funny.

Extreme Moment of the Year

Who Will Win – Brock Lesnar

This will contribute to the boos, as either Lesnar will appear via Pre Recorded Tape or Send Heyman out to gloat. Wrestling fans that cheered him winning the championship will start to turn on him here.

My Co-Host of @OneNationRadio James Boyd remarked to me, “If Rollins did this in The Attitude Era people would have crowned this an all-time great moment.” I agree. He pretty much attempted murder on national television. I’d say that’s better than a few tombstones.

Who Will Piss You Off – Kane hits Daniel Bryan with Tombstones on floor, steel steps and table on Raw

Hands up if you’re down for celebrating Kane at Daniel Bryan’s expense? It’s just a sad reminder that Daniel Bryan was taken from us due to injuries.

What They Missed – Rollins jumping off of Sh*t.

In both Shield vs Evolution matches his dives created timeless moments, which were turning points that led to victory.

Surprise Return of the Year

1. Hulk Hogan returns as the guest host of WrestleMania 30 on Raw
2. Ultimate Warrior returns to WWE at WrestleMania 30, Raw, Hall of Fame
3. Batista returns on Raw
4. The Rock returns to interrupt Rusev and Lana on Raw

Who Will Win – The Ultimate Warrior

We will once again celebrate the life of Warrior, comeback, and sudden tragedy here.

Who Should Win – The Rock

I’m convinced Twitter broke when The Rock randomly appeared on Raw. He returned to a massive ovation both in the arena, and online (a stark contrast from his 2013 Run.) Michael Cole almost collapsed. 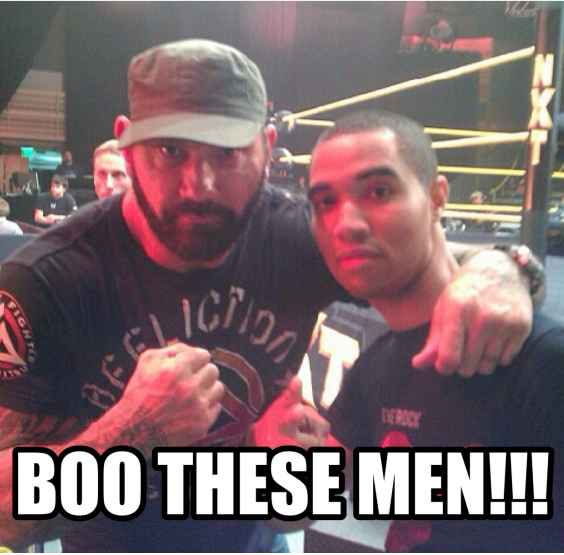 “This is Awesome” Moment of the Year

The Three Biggest Guys ever are beating everyone. Handily.

Nothing here. Usually awesome moments aren’t cause for fan resentment.

What They Missed – The Slow Motion Yes Chant

It was the moment fans knew Bryan was the uncrowned king of wrestling. Words can’t explain the moment where Bryan kicked Wyatt’s ass, and sat atop the cage while yes’ing slowly with an arena full of fans in the arena and worldwide.

The OMG Shocking Moment of the Year

What Will Win – Brock Lesnar 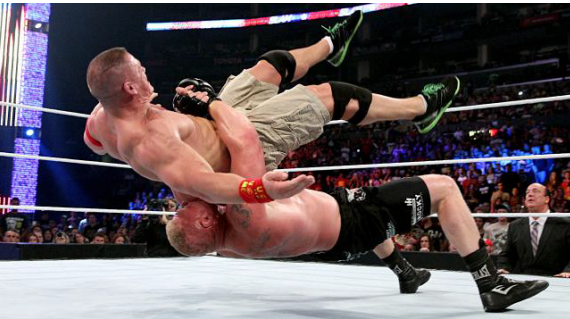 Brock Lesnar beating The Streak was something no one saw coming for a variety of reasons. Lesnar was and is a part-timer, we thought Taker would retire or drop it to a young guy, Lesnar looked terrible in the buildup, the feud was flat, and then it happened. Undertaker finally became human. What started as a blown tire in his match vs CM Punk, became a car sitting on bricks during his match with Lesnar. Few things could ever be more shocking in the future of wrestling. The sheer dejection in the audience radiated throughout the wrestling world.

Picking The Bella’s is the easy way out, so we’ll go with Wyatt and the kids. It was stupid then, and it’s dumber now. What parents were allowing their kid to hang with Bray Effing Wyatt in kayfabe? Shouldn’t Cena’s reaction have been “I don’t know these kids, this doesn’t bother me at all”? It just got worse at Extreme Rules.

What They Missed – Cesaro’s Feats Of Strength

Besides swinging everyone in sight, at Wrestlemania 30, Cesaro scooped The Big Show like Breyer’s Vanilla, held him for what seemed like a lifetime in the launching position, and dumped him over the top rope like yesterday’s trash. Of course they missed this, they hate Cesaro.

Regardless of who wins, remember these awards were probably gimmicked along the way. Maybe not. Make sure you vote, and follow me on Twitter @DangerRich32, and search One Nation Radio on iTunes!