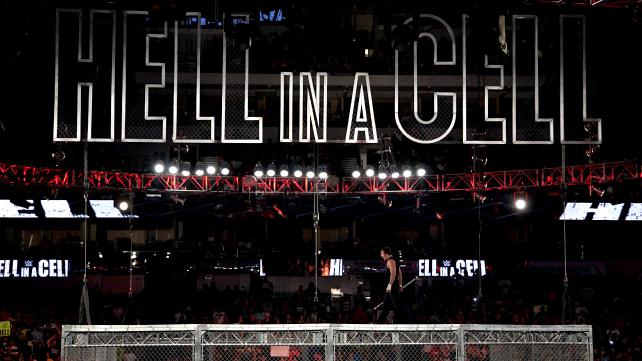 Last Sunday was the Hell In A Cell 2014 Pay Per View Event. I watched the event on the WWE Network on my XBOX 360 along side Jeremy LaBoy. I thought this was a very solid show. I predicted 7 out of 8 outcomes correctly, and I predicted that Bray Wyatt would return and help Seth Rollins get the win. Here are my thoughts on each of the matches:

2 of 3 Falls Match for the WWE Intercontinental Title: Cesaro vs. Dolph Ziggler 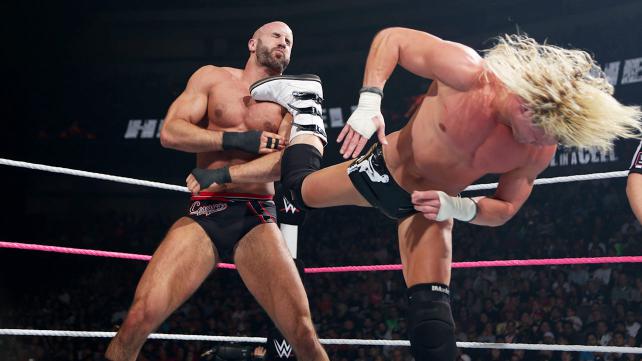 This was the perfect match to open the show. This match was high paced and had a lot of great spots. The strength of Cesaro and the speed of Ziggler clashed perfectly. I was surprised that Ziggler won with two straight falls considering he lost to Cesaro on Friday and has pretty much lost every non-title match headed into this event. As much as I love Cesaro and want to see him get his push, I’m glad Ziggler got a definitive win. With the WWE World Heavyweight Champion not appearing for the rest of the year WWE needs to make the Intercontinental and United States titles relevant again. Hopefully going forward Ziggler can pick up some non-title wins and have a lengthy meaningful title run. I hope creative sets a direction for Cesaro, he is too talented not to be utilized more. 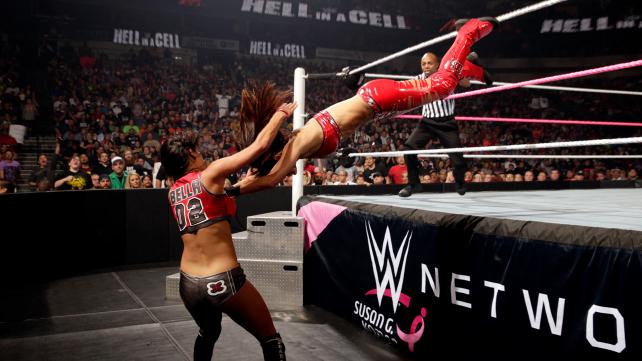 Unlike the rest of the Internet Wrestling Community, I expected this match to be decent. Both Bellas’ ring work have improved dramatically. One would have to assume that Daniel Bryan and John Cena have played a role in the improvement of the Bellas. Both Bellas worked hard in this match and had a few impressive spots including Brie’s dive through the ropes. Unfortunately the crowd wasn’t too in this match at all. Nikki picked up the win and now Brie has to be her personal assistant.

WWE Tag Team Titles: The Usos vs. Stardust and Goldust 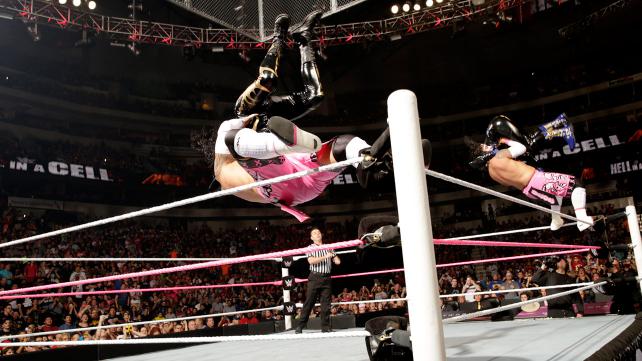 These two teams have been the heartbeat of the tag team division for the last two years. This was another good match between these two teams. This match was on par with their match they had at Night of Champions.I marked out for the double superplex spot. My only complaint about this match is I wish the Goldust and Stardust would have bended the rules a little bit more and I wish they had a more dirty finish to the match. This is the only match I predicted wrong. There aren’t many tag teams on the main roster so I’m curious to see who challenges Goldust and Stardust next and what will happen with The Usos.

Hell In a Cell: Randy Orton vs. John Cena 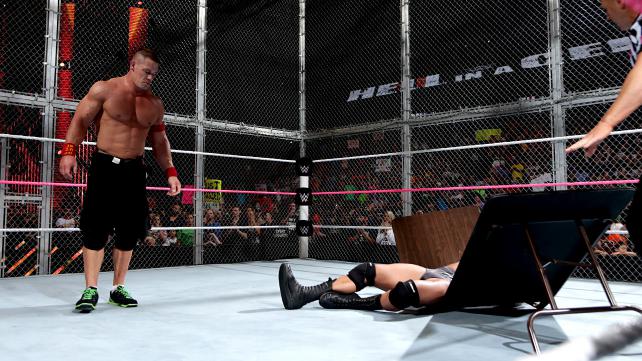 I was very surprised by the placement of this match. Knowing WWE I expected this to be the match to close the show. I think it was the right move putting this match here and letting Ambrose and Rollins close the show. Even though we’ve seen Orton vs. Cena very often this match was different from their other matches and was very entertaining. The reversal of the shoulder block and Attitude Adjustment into RKOs were a thing of beauty and Vine worthy. There was a few too many false finishes in the match for my taste. I was not totally upset about Cena winning because to me it was obvious he was going to win. Don’t get me wrong I would have rather seen Orton go against Lesnar but, Cena has unfinished business with Lesnar. 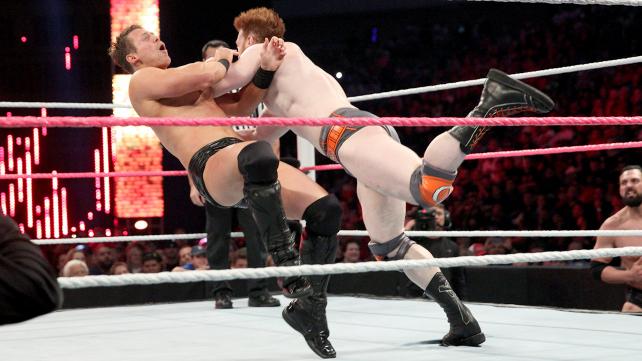 The star of this match was Damian Mizdow. He wasn’t competing in the match but he was mimicking Miz’s every move outside the ring. I loved it and the live audience in Dallas loved it too. There wasn’t anything too special about this match. As I predicted Sheamus retained the United States title and it looks like at Survivor Series we might finally see Rusev challenge for the United States Championship.

Speaking of Rusev, he had a great showing against Big Show. I was very impressed with the strength of Rusev. He suplexed Big Show with the greatest of ease! I was expecting Mark Henry to turn heel and purposely cost Big Show the match. Instead he came out and got super kicked. I was surprised they had Big Show tap out instead of pass out. Either way Rusev gets a strong victory and has his eyes set on the United States title. 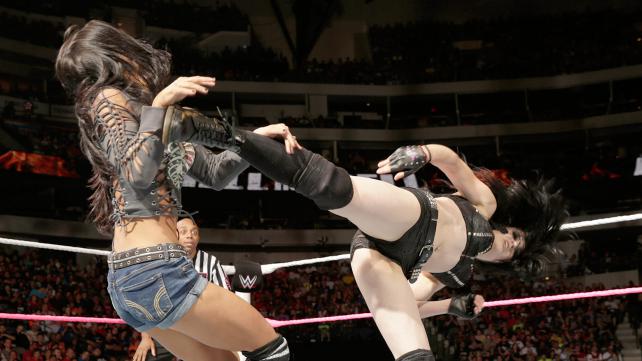 I don’t why the Divas Championship match always get stuck right before the main event. The crowd was ready for Ambrose and Rollins and didn’t seem to care too much about the outcome of this match. Part of the problem is there was not a definitive heel or babyface in this match. I know Aj is supposed to be the babyface and Paige is suppose to be the heel but, at times Aj has heel tendencies. This match wasn’t the best women’s match I’ve seen but, it was still solid. With Aj retaining there has to be some new blood brought up to challenge her. She has already proven she can beat the entire main diva roster.

Hell In A Cell: Dean Ambrose vs. Seth Rollins 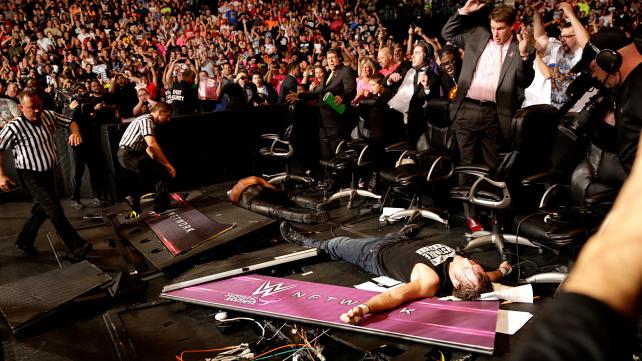 This was one of the best Hell In A Cell matches I’ve seen in a long time. The fight starting off on top of the cell was great and lead to both men crashing through announce tables. I can’t believe that some fans thought the match was over and didn’t think that Ambrose and Rollins would continue the match. I guess I can’t completely blame them since their match at Battleground and Night of Champions had no finish. Once Ambrose got Rollins back in the cell the violence continued. Both men took a lot of nasty looking bumps including Ambrose taking a powerbomb through a table that was wedged against the cell and the ring. As I mentioned in my predictions I had a feeling Bray Wyatt was going to return to feud with Ambrose. I was not upset about this finish. Rollins needed this victory just a little more than Ambrose did. Also with Rollins not winning clean it opens up the doors for a potential rematch down the road. Personally I would like to see Ambrose and Rollins compete at WrestleMania 31 in an Iron Man match.

What did you think about Hell In A Cell 2014? Sound off in the comments below.