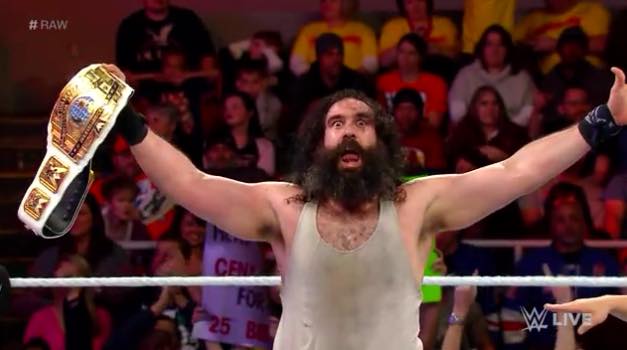 Last night was the Survivor Series go home WWE Raw hosted by Grumpy Cat. Not quite sure what value Grumpy Cat added to the show but, I’m sure Tyson Kidd was loving it. FACT!

A Fatal 4 Way for the WWE Tag Championships is set for Survivor Series and all the participants competed in an 8 man tag. I was happy to see Gold and Stardut’s team get the win. The Dust brothers have lost more non-title matches than I can count and it’s good to see the champions going in strong to the pay-per-view.

Damien Mizdow was not the only look alike on Raw. Brie Bella was dressed as AJ Lee for her exhibition match with Nikki. Due to interference from the real AJ, Brie was able to pick up a win, which I’m sure she’ll be punished for on Main Event or Smackdown.

Dean Ambrose and Bray Wyatt had another showdown. This Dean used some TV magic to be in tow places at once and attack Bray. It looks like WWE is trying their best to make Bray a heel. They’ve paired him up with a hot babyface, he no longer mentions the city, and he has been retreating more. I think it’s great! Their match on Sunday should be an all out war and the first of many battles in the war between the Lunatic Fringe and the Eater of Worlds.

Both Survivor Series teams are finalized and the battle lines have been drawn. Team Authority now consists of Seth Rollins, Corporate Kane, Mark Henry, Rusev, and Luke Harper. While Team Cena consists of John Cena, Dolph Ziggler, Big Show, Erick Rowan, and Ryback. Both teams have solid players and this has the potential to be an epic main event. I was surprised that Sheamus was replaced with Erick Rowan. It’s going to be very interesting to see Rowan and Luke Harper collide. Speaking of Luke Harper.

The WWE Raw Highlight of the Night was Luke Harper winning his first title in WWE. I love Dolph Ziggler but, I’m also a fan of Harper. I’ve loved his work since he was Brodie Lee in Ring of Honor. I would love to see Harper run rampant with the Intercontinental Championship and destroy everything in his path. I hope Dolph eventually gets a shot to be WWE Champion.