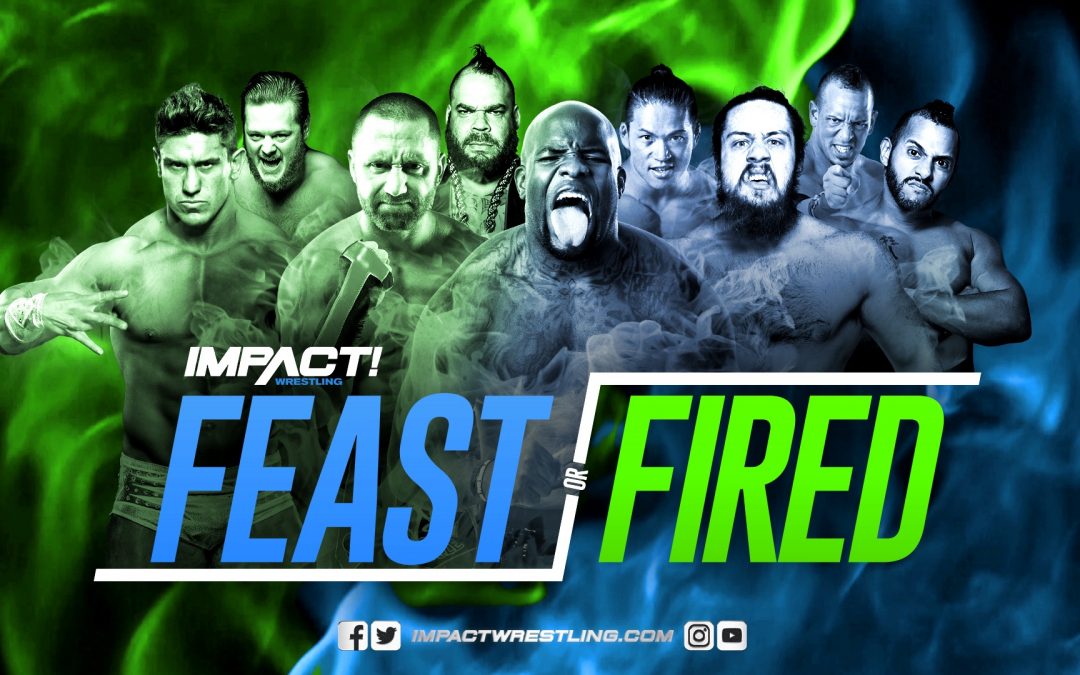 The show starts with the recently departed (from the company, not the planet) Jeremy Borash introducing us to the contestants of Feast or Fired, which will main event tonight’s show. We then get a recap from Crossroads, which was last week. Included in this hype package was Lashley beating oVe (with help from Brian Cage), Matt Sydal beating Ishimori to become both Impact Grand Champion & X-Division Champion, and chief among these highlights was Austin Aries successfully defending the Impact World Championship against Johnny Impact.

The in-ring portion of the show starts off with Sami Callihan and oVe coming to the ring. The commentary team of Sonjay Dutt & Josh Mathews makes sure to mention that Sami Callihan is inarguably the vilest man in Impact Wrestling after his baseball-centric assault of Eddie Edwards. Sami charges Bah early but is overpowered by the bigger competitor. Sami actually BIT Fallah Bah’s bare toe which gave Sami the opportunity to get the advantage on his opponent. There’s a bit of a back and forth until Fallah hits a BIG belly to belly suplex for a near fall.  Fallah goes for a Vader Bomb, but Callihan gets up in time to kick Fallah in the back of his leg, picks up the big man for a Death Valley Driver and wins the match. After the match all 3 members of oVe attack Fallah Bah, and even set up for the spot that fucked up Eddie Edwards’ eye, on Fallah Bah, but “Die Hard” Eddie Edwards makes the save with a lead pipe in hand.

After the match we see Rosemary preparing for her own match with Taya Valkyrie. After the break, we cut to an interview with Impact World Champion, Austin Aries. Austin is having a lighthearted conversation with interviewer McKenzie Mitchell including talk of veganism; when Alberto El Patron shows up and plays passive aggressive to get McKenzie to leave the scene. Alberto says he’s happy Austin is in Impact. Alberto mentions that he never lost his championship last year. Alberto also goes on to say he appreciates Austin as champion, and he even got Austin a gift. Alberto then offers Austin a piece of steak.

Austin refuses but Alberto continues to try and feed vegan World champion Austin Aries steak and thus Austin is very perturbed. Alberto then gets offended and says “things happen” when people turn down gifts from him. After Austin throws the steak across the room, Alberto then apologizes and offers to buy 2 copies of Austin’s book, Food Fight. However, Austin says he doesn’t need Alberto’s money because, and in his own words, Austin is making the champion’s purse now. A Double is a man after my own adoration.

Backstage Allie is conversing with the rookie knockout, Kiera Hogan when her “boo” Braxton Sutter shows up and basically scares Kiera off. Braxton says he needs to explain things to Allie when Allie says she needs alone time.

Jimmy Jacobs & Kongo Kong come to the ring and Jimmy is looking for Abyss, yet again. After assaulting every member of the Park family, Jimmy says he will unleash his monster on a path of destruction if Joseph Park does not produce Abyss. “WHERE IS ABYSS?!” asks the Zombie Princess, when all of a sudden Father James Mitchell shows up. Mitchell says that Jimmy reminds Mitchell of himself. Mitchell goes on to say that when you sell your soul, you eventually must pay that penance and that Jacobs’ penance is here. Abyss then comes to the side of Father James Mitchell. Abyss & Kongo Kong start a bit of a tussle, and Abyss throws Kong out of the ring. Mitchell says that Jacobs & Kong have an invitation to the ball, Monster’s Ball. There you have it, folks, Kongo Kong will face Abyss in a Monster’s Ball Match next week.

It’s worth noting that before this match started, there was a very well-produced video detailing the entire feud between these two knockouts, and along with entrances, did a good job of making this match feel like the continuation of a blood feud. Also, I love Rosemary’s theme music but that’s neither here nor there.

The match starts off with the catfight equivalent of hockey punches, and thankfully not a collar-and-elbow tie-up. Rosemary gets the early advantage and Taya then powders out of the ring. Rosemary has control for a couple of minutes, but Taya gains the upper hand when Rosemary goes shoulder first into the middle ring post after a missed shoulder tackle. Rosemary regains control after a German suplex. Rosemary goes for a sunset flip, Taya overpowers her. Rosemary bites Taya’s boot but Taya counters with a foot stomp. After minutes of back and forth, Rosemary goes for the Upside Down but fails to do so and Taya regains control. Taya then goes for Road to Valhalla, but Rosemary counters. After another minute of back and forth, Taya sets up for a Mexican Surfboard but instead nails a curb stomp. Taya goes to the top but misses a moonsault. Rosemary nails a knee to the jaw. Rosemary runs full force at Taya who was leaning on the ropes, and in the process, both competitors spill out of the ring and the match ends in a double count out. After the match, the two continue to brawl on the ramp. Rosemary goes for a spear at the top of the ramp, but Taya counters, and lands Road to Valhalla, to Rosemary at the top of the ramp.

WINNER: No Contest (Double Count Out)

After a commercial break, we are brought to Eli Drake in what looks like a spare office in Universal Studios. Eli calls Chris Adonis (apparently) and asks where Adonis is at. Adonis says he’s not coming to Feast or Fired, as he has no desire to potentially get fired. Eli then tells Adonis that he IS fired and Eli hangs up the landline in anger. Nice write off, I tell ya!

We are shown footage from “earlier today” where Brian Cage is eating some sort of healthy goodness, I can only assume. Lashley comes up on Cage and tells Cage he does not need nor want the help of The Machine, and Lashley does not need saving. Lashley says if Cage wants to make a name in Impact, he needs to fight Lashley man to man.

Impact Grand & X-Division Champion Matt Sydal enters the ring and takes a minute to thank the fans but says his new success is thanks to his one true spirit guide, who is revealed to be Josh Mathews. Josh gives Matt the gift of a rainbow pattern tiger mask. Matt says the mask represents his spirit animal, and thus Matt is giving Josh a gift as well. Matt Sydal gives Josh Mathews the gift of the Impact Grand Championship. The boyhood dream has come true.

The match features Eli Drake, EC3, Trevor Lee, Caleb Konley, Ishimori, Tyrus, Kevin Matthews, Petey Williams, Hakim Zane, and Moose. I’m going to be completely honest, this match is a cluster so I won’t waste your time or mine trying to recap this whole mess. The first case earned is Case 2, by Petey Williams after he cleared the ring with a Canadian Destroyer to Caleb Konley. The second case earned is Case 4, by Moose. EC3 would go on to claim Case 3 of all cases! The final case, Case 1 is earned by Eli Drake after he hits Ishimori, KM, and Hakim Zane with The Gravy Train. Eli then dumps Konley out of the ring, sprints from the other side of the ring to stop Trevor Lee from taking the case with a super German suplex. That’s the show for this week, next week we find out exactly who drew what case, even though most of us watching can figure out which case EC3 ended up with.