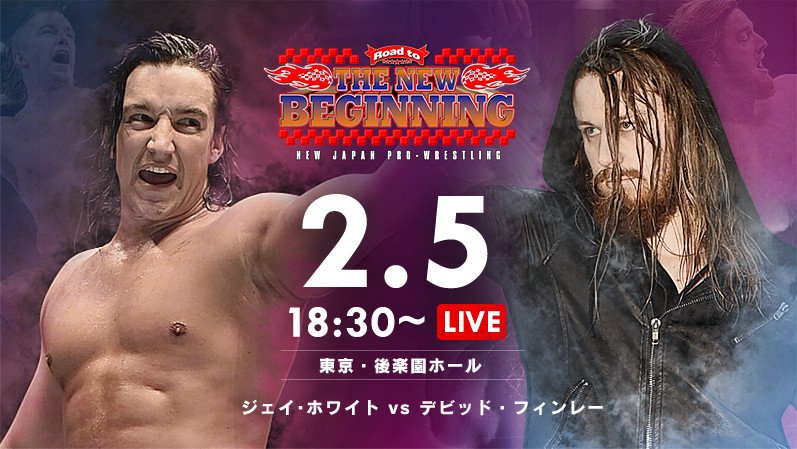 June 2016, the last time White and Finlay met in a New Japan ring. February 5th, 2018, the next time the two clash, the difference? The two are no longer Young Lions, and the two have had completely different career paths over the past two years. One, a developing competitor stuck in undercard tag limbo, the other, the new IWGP US Champion, fresh off of two main event title matches that wrestlers can only dream of having, one being against ‘The Ace’ Hiroshi Tanahashi, the other against the ‘six-star match machine’, ‘the cleaner’ Kenny Omega. So why is it that the careers of the fourth-generation competitor David Finlay and everyone’s favorite Kiwi Jay White have taken completely different paths?

It’s a bold question to answer, and realistically for my first article, it’s a tough one, but I enjoy a challenge, so why not tackle it?Bear in mind this is not an article that seeks to bash David Finlay, I enjoy his wrestling a lot, his lineage alone is enough to build a company around, but it is clear that there is a ceiling for him, and that ceiling is a lot smaller than his once fellow Young Lion, Jay White.

The sole reason for this, in my opinion, excursion. It’s a vital time for any Young Lion to gain experience, develop their character, and showcase their talents in a much higher caliber setting than the New Japan undercard. Look at Hiromu Takahashi for example, he went on excursion over in CMLL, had classics with the likes of Dragon Lee, and came back a refreshed and fantastic Junior Heavyweight that has transformed into one of the brightest talents the company has. Without excursion, there wouldn’t be a ticking time bomb, a loveable fan favorite with infectious charisma, there would just be Hiromu Takahashi, the Junior.

The same goes for Kazuchika Okada. Of course, Okada didn’t go on a traditional excursion, nor did he put on wrestling clinics, in fact, he didn’t really find himself used in a role other than a glorified stereotype who wrestled, having a brief stint in TNA to gain valuable experience (some argue he didn’t, but Okada himself has credited that it was a necessary move to push forward his development), but it’s key to any young upstart’s career that they get some big-time matches, or at least just a feel for having a proper character, no matter how disappointing that character may be, under their belt. David Finlay didn’t have this. Rushed forward by announcing himself as a graduate from the New Japan Dojo, he was also just thrust into an undercard scene that was already fairly saturated. His in-ring work has never been the problem, he is constantly improving at a consistent level, and sometimes provides the bright moments of a slow Liger multi-man match, usually against Suzuki-Gun.

However, he just doesn’t have an investible character. Nobody cares for the character David Finlay, there are no layers, and there is nothing exciting about him to make you invested. He’s just David Finlay, the son of Fit Finlay, and that’s about it. Had he gone on excursion to a Ring of Honor, or even a Rev Pro (my preferred destination for him), there easily could have been an investible, or at least mildly captivating performer created. David would have been able to perform in front of a crowd that could follow and invest in his development, and as I said before, his in-ring work has never been the problem, there’s no reason he couldn’t churn out so main event calibre matches against the likes of Zack Sabre Jr, Matt Riddle, Travis Banks to name but a few, but he has never been awarded that opportunity.

That could all change of course, and I’d like to think it will, as a man I consider to be his equal in card position Chase Owens has recently been allowed the scope to become interesting with his honorary Tongan gimmick in the Bullet Club, without any sort of excursion. Maybe that is a counter-argument to my point, but Owens isn’t particularly a staple of New Japan, nor did he follow the Young Lion route, so it probably isn’t.

And this is the part I talk about Jay White, the man who took Ring Of Honor by storm throughout 2017, particularly in the second half of the year. He had critique over a lack of charisma, but I think we’ve seen under the ‘Switchblade’ gimmick that this has been used to his advantage, with him appearing cynical and calculated as opposed to someone who is charisma personified like a Kenny Omega. White developed into an interesting character as part of ‘Search and Destroy’ and had great matches against the likes of Will Ospreay and Kushida in the ROH ring.

He was nurtured and his advantages amplified whilst his weaknesses were slowly but surely being improved. Week by week, month by month, Jay White was becoming a star, and that has been proven with his fantastic matches against both Tanahashi (that being more subjective than the next) and Kenny Omega, and maybe he was helped massively by being in the ring with two of the best performers the business has seen, but in New Japan you have to hold your own, and Jay White more than held his own on both occasions.

He might not be a certified ticket selling machine just yet, but he is being built to be a star of the future, performing in high stakes matches and finding himself in CHAOS, the stable that is home to the World Heavyweight Champion of all people, Kazuchika Okada. ‘Switchblade’, despite being just one year older than David Finlay, finds himself significantly ahead of him in terms of card position, crowd investment, and overall believability as a major player. One could have an incredibly solid G1 this year without anyone batting an eyelid, the other will probably find himself eating pins in various multi-man tag matches. Again, this sounds like I am against David Finlay, but I’m not, I like the guy, but he needs a complete overhaul, and that starts at excursion.

In just four days’ time, White and Finlay will come to blows again, and it’s a shining example of the gulf in class that nobody expects anyone other than the first name mentioned to win, and convincingly so. With that being said, with the right development, and the right kind of character, Finlay too could find himself becoming a major player in New Japan going forward. The toolbox is there, it just needs to be opened, and opened soon. So, tune in February 5th and watch the match, it’s bound to be an entertaining one, but for me, it’s hard not to see it as a glaring example of just how successful the excursion system can be, and with the new US Champion Jay White bound to go into Strong Style Evolved defending the strap, New Japan have no doubt that he can be a major part of their development and growth over in the Western market. The audience is already familiar with him after all, and we all saw how much the fans took to him in Ring of Honor, so there’s no reason they won’t do the same now he is back home in New Japan.

So that was that I’d love to hear your thoughts, and I hope you check back for my next article, where I’ll probably choose a less challenging subject to delve into.