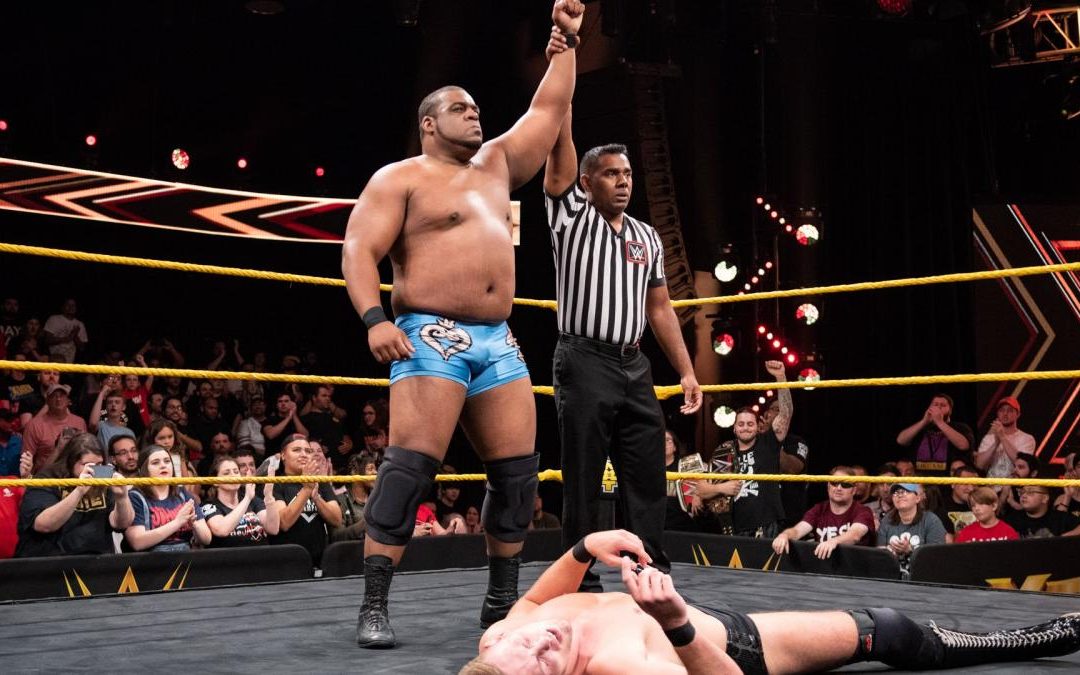 What’s up readers, we’re back with another red hot review of the best brand in WWE, the yellow one! NXT came out with a new episode that ended just minutes ago, and without further ado, I’m going to give you all the details you need to know from this installment of the best weekly wrestling show on Earth 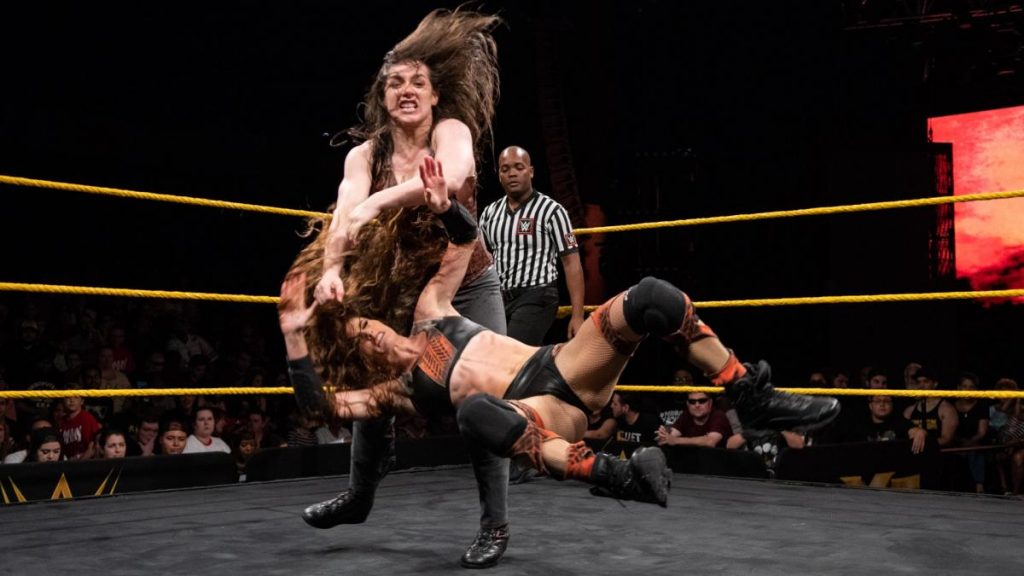 The night started out with Nikki Cross vs Amber Nova, and to say it was a battle of opposites would be an understatement. Amber Nova looks like she sells weight loss tea on Instagram, while Nikki Cross is, well, Nikki Cross. The match was more competitive than I thought it would be, Amber Nova actually got a fair amount of offense in, but in the end, Nikki Cross hit the fisherman’s neckbreaker for the win.

While I enjoy watching Nikki Cross wrestle I do have to wonder: What is the plan with her right now? I say pretty often that NXT happens in chapters, and at this point, Nikki Cross feels like someone whose story was told two chapters ago. She had that great feud with Ruby Riott, the last woman standing match with Asuka, and then she stagnated for a little bit. I thought the match she got with Shayna Baszler in Chicago was her swan song, but Nikki Cross lost that match and is still in NXT. Does she work towards challenging for the Women’s championship again? Does she stick around and put over some of the women from the second Mae Young Classic? And if she does, when in the blue hell does she go up to the main roster? It just feels like Nikki Cross is about to get lost in the shuffle, and that worries me.

After this match, we got a brief Keith Lee video package, which I loved because I am a HUGE Keith Lee mark, and he would debut later in the episode. 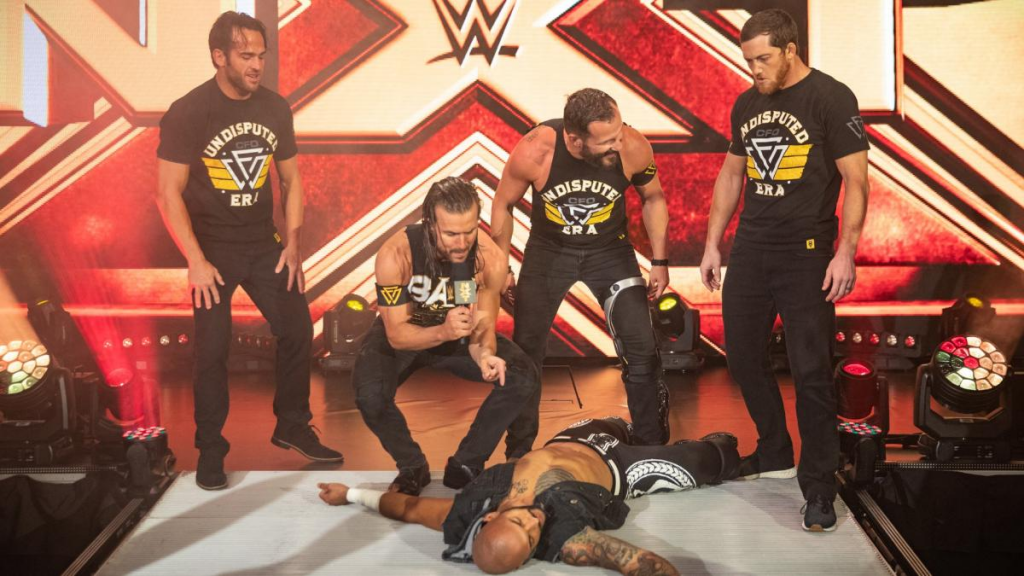 Last week we were promised a Ricochet match, and after a brief commercial break Ricochet’s entrance music hit. However, it was The Undisputed Era standing over Ricochet when the lights came up. After beating down NXT’s One And Only, Adam Cole called Ricochet out, saying that Ricochet wouldn’t win the North American championship in Brooklyn. Then Adam Cole and the Undisputed Era hit the UE pose on the ramp, and we cut to a backstage interview with Vanessa Borne.

Vanessa Borne was warming up for her match against Taynara Conti, which evidently would be a Mae Young Classic qualifying match. Borne called herself “The Vision”, and said that she needed to be in the Mae Young Classic because she didn’t want to deprive the world of “The Vision”. Then she shooed the camera crew away and we cut away. 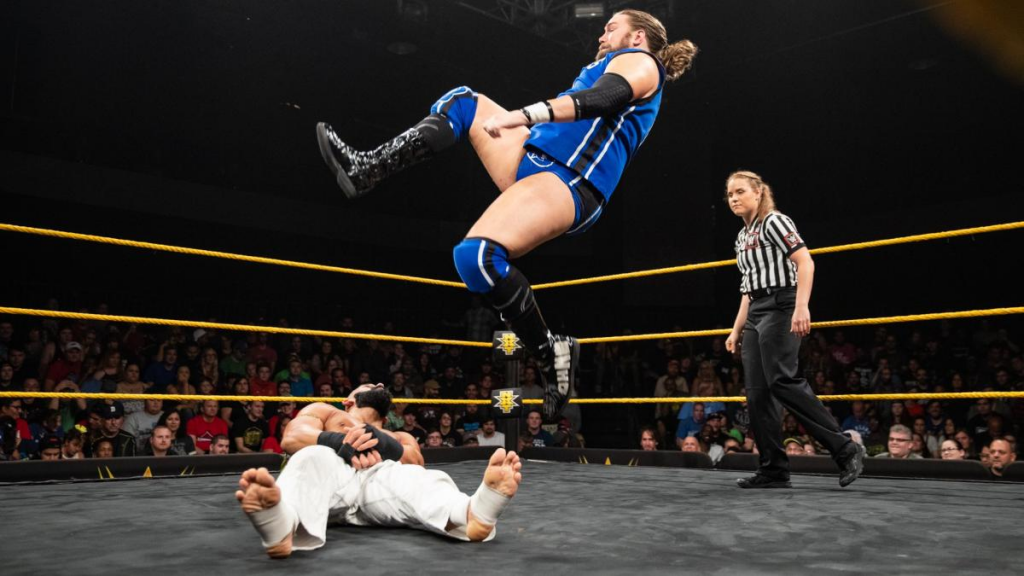 When we came back Adrian Jaoude was making his entrance in a gi. I had only ever heard of Jaoude as the guy who tagged with Cesar Bononi at house shows, but on this week’s episode, Jaoude got a match against Kassius Ohno. Ohno was looking a little more heelish in the ring, and after a 3 or 4-minute match Ohno hit Jaoude with “The Dreamcrusher”, a twisting neckbreaker setup into a rolling elbow. Jaoude didn’t look half bad in this match, but Ohno was clearly the story here. I don’t think Ohno will ever win the NXT championship or even the North American Championship, but he’s clearly a great hand to have around the performance center.

The “Unconventional Summit” between EC3 and The Velveteen Dream

Every once in a while there is a segment on WWE TV that, as a viewer, you just know is going to be pure gold. The New Day vs The Usos comes to mind, and this was one of those segments. Everything about it hit perfectly to me. The pink haze on the edge of the screen, The Velveteen Dream saying “sit down EC3” only to follow it up with “wanna take a walk?”, the bass beat that was playing through the whole segment. It was just incredible. This segment was as if the Hardy Compound got a bizarre makeover, and EC3 and The Velveteen Dream played it perfectly. Also, it should be noted, The Velveteen Dream was lounging by the pool in his socks. Not a fashion choice I’d make, but I guess that’s why he’s the Purple Rainmaker and I’m sitting on the couch. After some back and forth, The Velveteen Dream said that EC3 had disrespected him, at which point the Dream dropped his sunglasses. EC3 went to pick them up, and when the Dream went to hit EC3, EC3 threw him into the pool, soaking the Dream’s previously mentioned pool socks. Honestly, the toughest look of this whole segment was that the Dream’s pool is only 3 feet deep (EC3 yelled this fact at the Dream as the Dream was flailing around in the pool). Call me crazy, but I would’ve expected someone with that much swagger to have a pool that’s at least diving depth. 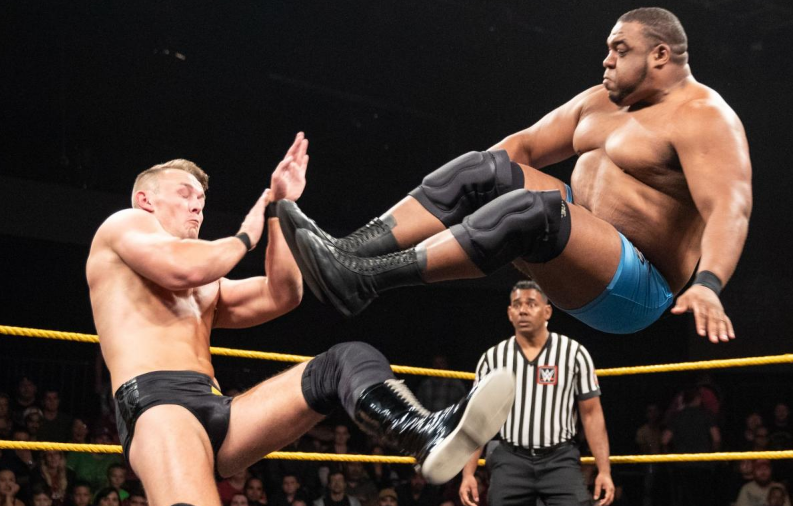 This was the match that I was most looking forward to in this episode. Keith Lee was the first indy wrestler who I had met before they signed with NXT, and I was psyched out of my mind to see him in a WWE ring. What I didn’t know was that Marcel Barthel would also be making his TV debut. Barthel is somebody who I had never seen wrestle, but I had heard his name before from reading NXT house show results.

Barthel got on the offensive early before Keith Lee hit a leapfrog-dropdown-dropkick combo to turn things around. Keith Lee is 330 pounds, so that combo looked WILD. Barthel continued to get offense in, but Lee turned things around again with a headbutt and a doublehanded Russian chop in the corner. Finally, Keith Lee hit a fireman’s carry Jackhammer for the win.

Following a commercial break we got the Street Profits cutting a promo next to an ATM (sure, why not), and Dawkins & Ford told us that they’d be fighting The Mighty next week. This promo was another example of how NXT gives wrestlers more freedom in their promos, and how much more natural those promos sound as a result. Dawkins & Ford played off each other really well here, and they didn’t sound robotic at all, which is a rarity on most WWE Tv.

Next, we got the Mae Young Classic qualifying match between Taynara Conti and Vanessa Borne. Taynara Conti’s entrance music is a British rap/EDM combo which is…bold, to say the least. The match was pretty back and forth until Vanessa Borne hit Conti with a slap to the face. I didn’t think slapping somebody in the face in a wrestling match was the worst thing in the world, but apparently, Taynara Conti did, because she yelled “are you crazy?!?!” at Borne before hitting a…something to finish the match. It looked like Borne went for a crucifix bomb but Conti countered it into a front slam. It doesn’t look like a great finisher, but hey, one of the most over people in NXT history used a belly to belly suplex as her finisher, so who knows. Finisher jokes aside, good for Taynara Conti for qualifying for the Mae Young Classic.

After a recap of previous events between Kairi Sane and Shayna Baszler, and two match announcements (Kairi Sane vs Aaliyah and Roderick Strong vs Tyler Bate), it was main event time. 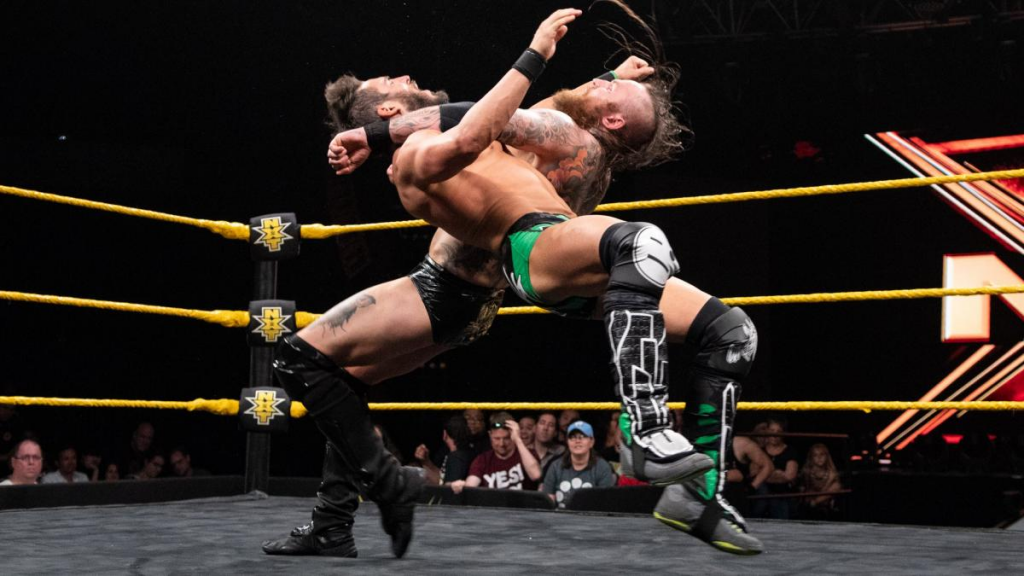 Let’s be honest here folks, we all knew this match would be fun to watch before it happened. Mauro Ranallo started quoting Nietzche during Gargano’s entrance, which was a bit surprising but I guess that’s the Mauro difference. Aleister jumped Gargano from the bell, and after some strike exchanges, Gargano hit a tope suicida. There is clearly some chemistry between these two guys, and I really wouldn’t mind seeing them get a one-on-one takeover match at some point. I don’t know if it’ll happen, because Aleister Black recently had surgery on a groin injury and we don’t know where Gargano will be once Black is healthy again, but I suppose I can dream. As for this match, Tommaso Ciampa came out and interrupted the match, throwing Gargano out of the ring and kicking Black in the corner. After refs came out to separate the three men, William Regal’s music hit. Now if you’ve been watching NXT for any amount of time you probably know this, but I’ll say it anyway: When Regal’s music hits, s**t’s about to go DOWN. This case was no different, as Regal announced a triple threat for the NXT Championship in Brooklyn! I have no idea what’ll happen with that match now that Black is hurt, maybe it’ll be a one-on-one match between Gargano and Ciampa, but that’s the kind of thing you’ll have to watch NXT next week to find out!

I’ll see y’all next week for the go-home show, Roddy Strong vs Tyler Bate was great the first time it happened in NXT, so be sure to catch that.