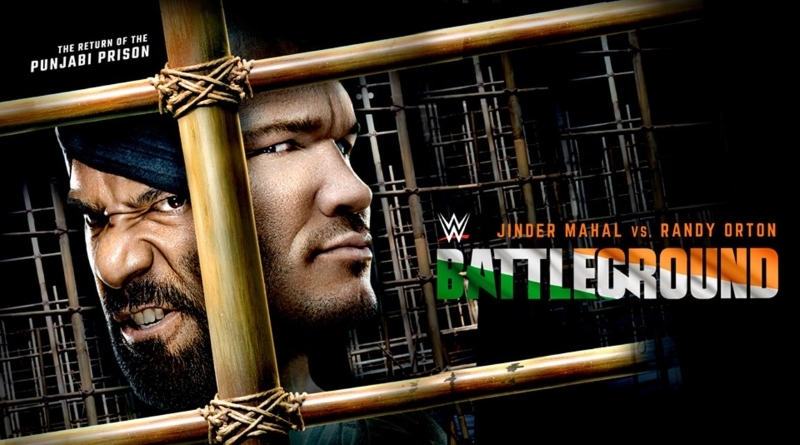 WWE Battleground has come and gone. In the past Battleground has ranged from being a pleasant surprise to being totally skippable. Remember when The Big Show knocked out both Daniel Bryan and Randy Orton to go to a no decision on a show they charged $50 for? (What up 2013!). I’ve always kind of rooted for Battleground, as the 15’ and 16’ versions were both good, and I attended the 2014 year.  But the 2017 version is unquestionably the worst edition ever not only for its putrid main event that featured the return of THE GREAT KHALI, but an uninspired undercard that seems to continue to have all the right pieces in the wrong places for SmackDown. I don’t currently do a PPV review series, but it’s not often I get to write about possibly the worst WWE show of the decade.

Since it’s the freshest thing in my mind, let’s begin with the almost literally unwatchable main event. Yes, people were tweeting photos from ringside saying they couldn’t see a damn thing. It’s no secret as I’ve made it clear where I’ve stood on Jinder Mahal’s sudden rise to Smackdown’s top prize on podcasts and live shows on One Nation Radio and The Doc Says with Chad Matthews, but now that his first feud is seemingly finished, allow me to dump on this embarrassment of a main event that is sure to go down as the worst show closer of the year, non-squash division. 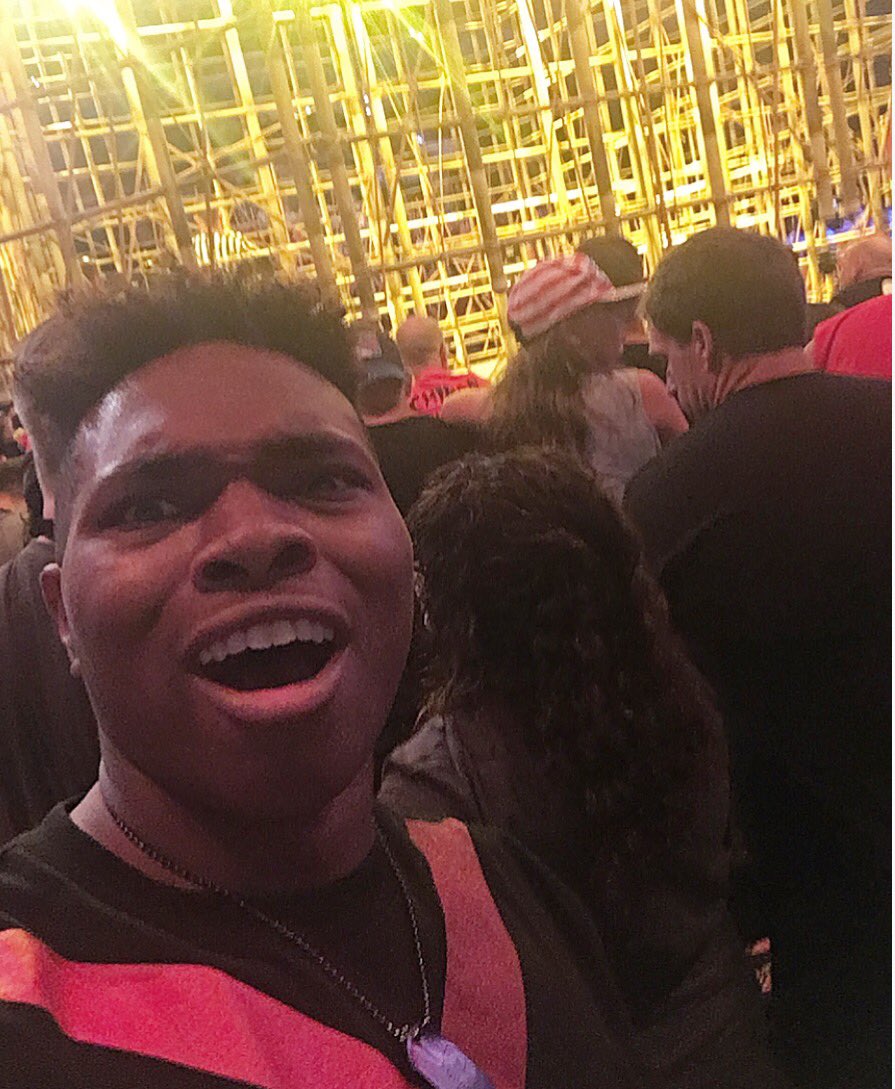 It felt like a lesser version of Shane/Taker from WM32, with a few big spots built around a long boring brawl. Samir Singh should be praised for bumping like that to attempt to get this dumpster fire back on track, but honestly, he would have needed to fall 5 more times to save this match from certain doom. If anyone should be representing the 1.3 as champion (How I will now refer to India’s population) it should be him! I’ve never gone into the negative star range since I began rating matches, but this occasion seems fit. The Great Khali made Kevin Nash look like Usain Bolt, as he marched and stepped his way down the aisle SLOWLY, to climb a rung and a half off the ground to reintroduce himself as the next gimmick aside from the Singh brothers to aid Jinder Mahal’s main event career. 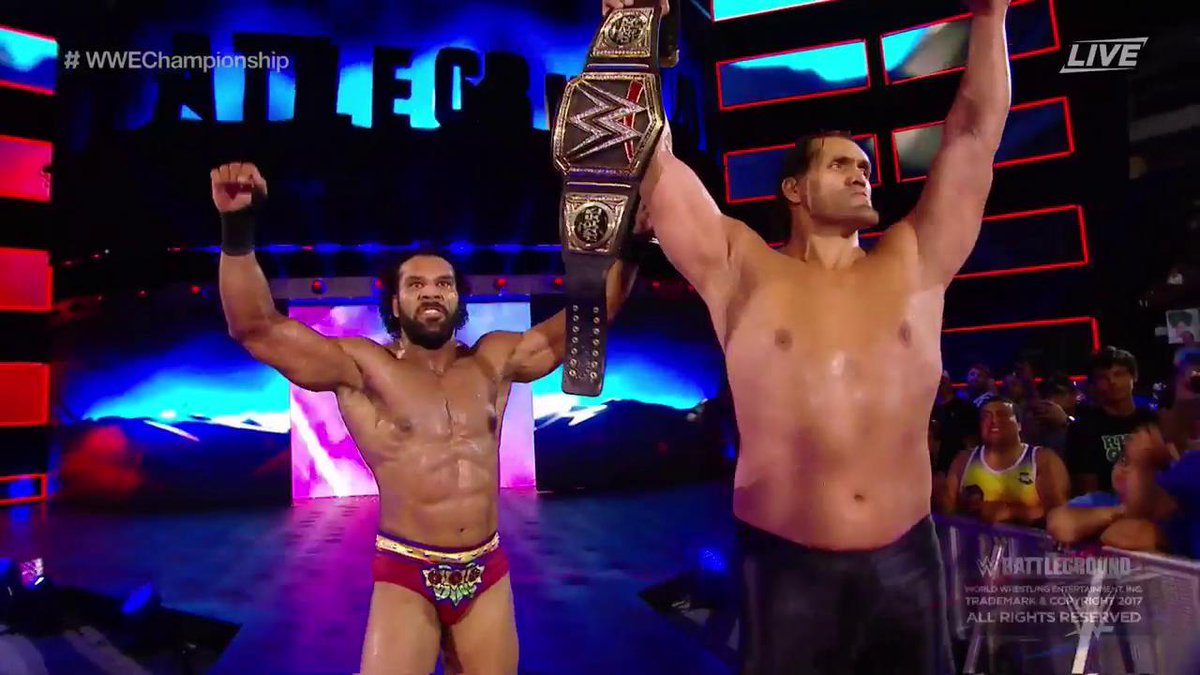 Is this what we’re doing out here in these streets?

Fans chanted “Trust The Process” “Big Show” and of course “CM Punk”, along with a few trolls who managed to get a small “Let’s Go Jinder” chant going. Bless their souls. It’s the latest sad effort that Randy Orton has been involved in for the WWE Title this year. Small children everywhere should have hidden their eyes from the horror that was that main event, and the film of this match should be used as a torture practice a rung below sleep deprivation. (-*)

Not much better was the Flag Match between John Cena and Rusev where both flags repeatedly hit the ground, causing some fans I know to be deeply upset. Others didn’t mind but I find it to be something you don’t really have to do if you can avoid it. In this U.S vs. The World scenario, America triumphed over our nemesis….. Bulgaria???? Whatever. John Cena looked a step slower than normal in this match, and the 20 minutes this match got would have been better served from WWE by playing re-runs of AWA Super Clash on the screen. Toward the end, it got better, but the deal was sealed long before then. (**1/2)

Subsequently going into this show, I thought it was time for Shinsuke Nakamura to be showcased as I felt some were beginning to question his greatness. During his entrance, he felt as larger than life as ever, but the Corbin-led match played to almost none of his strengths as we got left with a match that ended with a kick to the dick, and a finishing move by Corbin after he had decided to be a coward. That’s right, HEAT ON HEAT! The long bear-hugs and stalling by both men made for a less than stellar effort that makes you question why it was even booked in the first place? It reeked of, “We don’t want to pin Nakamura, but we don’t want Corbin to lose either even though we normally beat MITB holders like an African drum.” They could have just gotten the same result with Corbin pinning Nakamura. (*3/4)

Let’s get to the good stuff, I’ve been far too harsh, and I enjoy writing about things I like much more.

The Usos and The New Day put on a terrific performance that reminded everyone that these are two of the greatest teams of all time. The New Day shuffled their normal lineup to feature the often left out Xavier Woods, who shined in a star making performance, filled with drama, unexpected turns and some great moves.

This match perfectly built off the awesome rap battle these two teams had. As great as The Usos have been as champions, their fans should not be discouraged with them dropping the titles, as these two teams are built to run back rematches for the rest of the summer. (****1/4)

The Usos stealing the show in the opener was perhaps a nod to their 2014 classic against Harper and Rowan, which is possibly my favorite match I’ve ever been in attendance for. With The New Day taking the gold, they get to unleash their form of excellence on Tuesdays, but with better competition than they’ve faced in the past in Jimmy and Jey.

AJ Styles has lost every PPV match this year aside from his victory over non-wrestler Shane McMahon. Hell of a way to spotlight the unofficial 2016 WWE MVP isn’t it? It’s not just the losses, there is just something off. It’s like he’s being told to turn it down a bit since WrestleMania on PPV. His bout and feud with Owens may have suffered from people not digging the presentation of it, as these were the two top champions in January, now fighting for a lesser belt. The booking of it hasn’t helped, with the lone feel good moment coming at a house show that the world didn’t see; sandwiched between a count out finish and what looked to be a double pin. (***1/4)

I’m not as angered as some about Natalya winning the #1 contendership as some, but in taking the get everyone on the show route, the inclusion of Tamina and Lana made for more of a stubbed toe to a match that could have flowed more freely with just the other 3 women involved. (**3/4)

Decent win for Zayn in a short match in the death spot (**1/4), who has been more successful on PPV lately than some would think. Mike Kanellis is finished though. The power of love can’t save this dude. Both guys should fight other people.

This show brought Smackdown’s glaring issues to the forefront. Even the biggest SD homers would be hard pressed to admit this show was anything north of terrible. Or, you know they could just lie for their pride. Smackdown was doing just fine with AJ Styles blowing each main event out of the water, but apparently, WWE didn’t see fit for that to continue. SmackDown began getting the screws before WrestleMania, and Battleground has showcased its demise from matchmaking, and positions on the card. I’d like to think Luke Harper, Chad Gable, or Dolph Ziggler could have offered something last night, but they would have probably gotten screwed up too.

Captain Jinder is “leading” a ship that is headed into wavy waters; I just hope the boat doesn’t sink before the holes are plugged. I sat down thinking this could be a worst show of the year contender, but the decade?? Say it ain’t so!

Damn, I’m never getting those 3 hours back. I’m going to watch the G1 now excuse me.