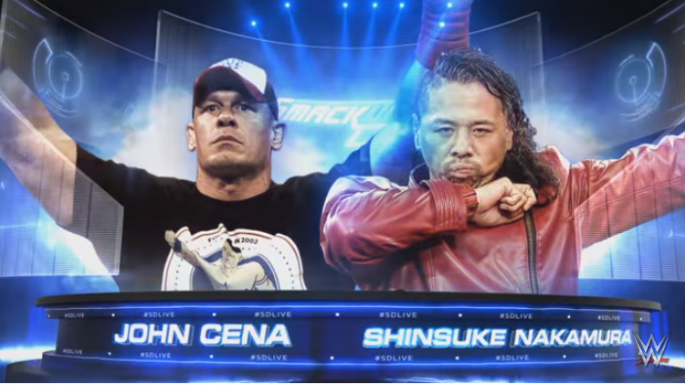 John Cena vs Shinsuke Nakamura will take place next week on Smackdown Live to determine who will challenge Jinder Mahal for the WWE Championship at Summerslam. Yes, this Wrestlemania Main Event level dream match is happening with a 1 week notice out of thin air. Am I excited? Well hell yeah I am, but I can’t fathom why this isn’t even bigger. It could blow away anything on the SummerSlam card if given the time, and the winner will be left with a lesser appealing match for the August Classic. If I can paraphrase my Co-Host of One Nation Radio James Boyd, he said something to the effect of “It’s similar to the Randy Orton vs AJ Styles match before Wrestlemania where they did the superior match on TV.”

Shinsuke Nakamura has maintained much of his aura as people still lose their minds during his entrance. However so far, his matches have been laid out in weird styles to where he could not showcase his full abilities in his PPV bouts with Dolph Ziggler and Baron Corbin respectively. The Nakamura vs Cena match is being used to mask months of malaise on the blue brand, but I can’t help thinking putting it on TV for the first time is a mistake. Especially with the matches SmackDown has put on their PPV’s the last 3 months.

The PPV’s have been building to TV, which sort of inverts the business and harkens back to WCW. They are no longer a PPV based company, but a major selling point of the network is quality PPVs which they’ve given more times than not in the network era. The checks are already cut for TV, so posturing for temporary ratings that may change a few tenths of a point is a head scratcher. But let’s look at it from the other angle in more detail.

WWE knows what anticipated matches are. They’ve been denying them for much of this year in favor of other stuff with a few exceptions. Remember when AJ and Shinsuke faced off at MITB and a collective, “THIS IS WHAT WE REALLY WANT” swept over the crowd? There is no question Cena vs Nakamura is right up there as possibly WWE’s most exciting match they can deploy. Putting it on Smackdown where more people will see it than on the network makes SD Live appointment TV. It also looks to have been booked to answer to Raw’s Strowman/Roman/Joe match booked for next week.  On that front, sure… Book it. However, address the PPV scene where two and 3 star matches, and terrible finishes have lived in abundance for months now.

The only other question is what if WWE doesn’t think it’s a big enough match for their grand stages? Is that ok with anyone? That would speak to a severe miscalculation of potential big matches, where their vision has been under scrutiny the entire year. Brock Lesnar vs Samoa Joe felt special because it was. It was wanted before WWE even had to work at it. At Wrestlemania, Randy Orton vs AJ Styles or Styles vs Cena the final chapter, was passed over for Bray Wyatt vs Randy Orton and some graphics on the mat. Sometimes it feels like they would rather work to hope we’re sold on a match like shooting over triple teams rather than take the wide open lay-ups with no defenders around.

What if WWE knows exactly how big this match is and this is a new form they’d like us to consume great matches in? Would it be a radical change from their history, yes it would. However like life, wrestling will continue to move forward. And in those forward steps, traces of the past often emerge as reminders that sometimes the past is willing to fight to maintain its way of doing things. We’ll have our answer in how this match is presented and executed next week.

This match and the show after Battleground is proof that WWE realized the missteps of that night in Philadelphia, and they ARE willing to fix things with those of us who have been disenchanted by SmackDown as of late. Our beloved blue brand was decimated by Wrestlemania season, and might finally be ready to turn the corner. This match will be the flashpoint. I hope.

Or Baron Corbin could interfere and turn it into another Fatal-4-Way at which point I’ll light myself on fire.

Click through my name or here to read other editions of Latta’s Lariat!