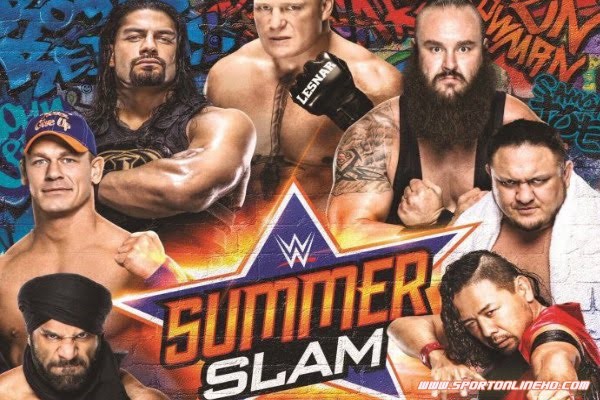 WWE Summerslam 2017 was a night of back and forth excitement and misery. From watching the literal execution of Baron Corbin as a future star to a pair of great tag team matches I predicted would save the card, then a WWE title match that made me think Shinsuke Nakamura should leave and go back to New Japan. These long shows have developed a pattern where you can usually chop of 90 minutes of extra stuff that seems to just eat at the excitement of the rest of the show.

The way the show began, I thought it was working to be a reverse Wrestlemania 33, where the second half would be of higher quality while the first just kind of existed there. However, as things went on, I realized this is what “big” WWE shows are now in 2017. A few things you want to see, more that you don’t, and guys in matches that should probably be wrestling someone else. Here’s what I thought of the show. In some cases, there will be revised ratings to reflect my thoughts the day after.

The Miz pinned Jason Jordan who is falling like Don Zimmer running at Pedro Martinez in 2003 in an effort in front of about 40 people. Poor Miz. No rating. I feel bad for those guys, and I caught only half the match.

BEND! THE! KNEE! For Neville, as he regained the Cruiserweight Championship in a good contest I couldn’t zone in on because I was riding in a car. I was secretly rooting against our KING and hoped he could be AJ Styles next challenger for the United States Championship. Nope, he’s stuck in the annals of 205 Live. Deep sigh.

The Usos and The New Day submitted a tag match of the decade contender and wrestled with a sense of, “Don’t yall ever put us on the pre-show again!” that created what will be a forgotten classic, because remember no matter what WWE tells you, pre-show matches don’t actually exist. However, those of us that did see it tonight, because it won’t be on DVDs, saw another great chapter in the book of Usos vs New Day. (****1/2)

Then Shawn Michaels showed up as Colonel Sanders, with his wrists taped as if he was ready for action. Instead of Ziggler last year, KFC went and got the original.

Here lies Baron Corbin. He was mocked by the crowd and his opponent as he submitted one of the most regular performances in ages for a John Cena opponent. Cena probably requested this be put on first because he had more important things to attend to. Instead of a great match, Corbin slogged through and slid out of the ring at every turn. An AA later, and Cena was saluting the crowd and wishing us luck over the next 4 hours. This was Corbin vs The Crowd featuring John Cena. (**1/2)

Natalya and Naomi exceeded expectations from folks, as Naomi finally got her first real chance at a defense, and whoops she lost. Very happy for Natalya who has spent her career being passed over, while still maintaining quality work. Her Total Divas popularity, always impressive wrestling, and great heel work over the last year made it a great time to give her a chance with the title. (***1/4)

Show vs Cass was dreadful. The shark cage gimmick was completely exposed and I think the match type should be abolished. Cass, the heel, valiantly fought off a giant and an annoying loser with a penchant for pandering with his two hands and impactful big boot. Yuck. (*) Originally, I had it at * ½, but upon further thought, this stunk out the building.

Randy Orton vs Rusev happened exactly as I said it would once Rusev attacked him. I leaned over to my buddy Josh and said, “Rusev charges, misses, then gets hit with an RKO.” (DUD)

At this point, worst Summerslam ever talk was generating around my party. A DUD and 1 star effort back to back will do that. 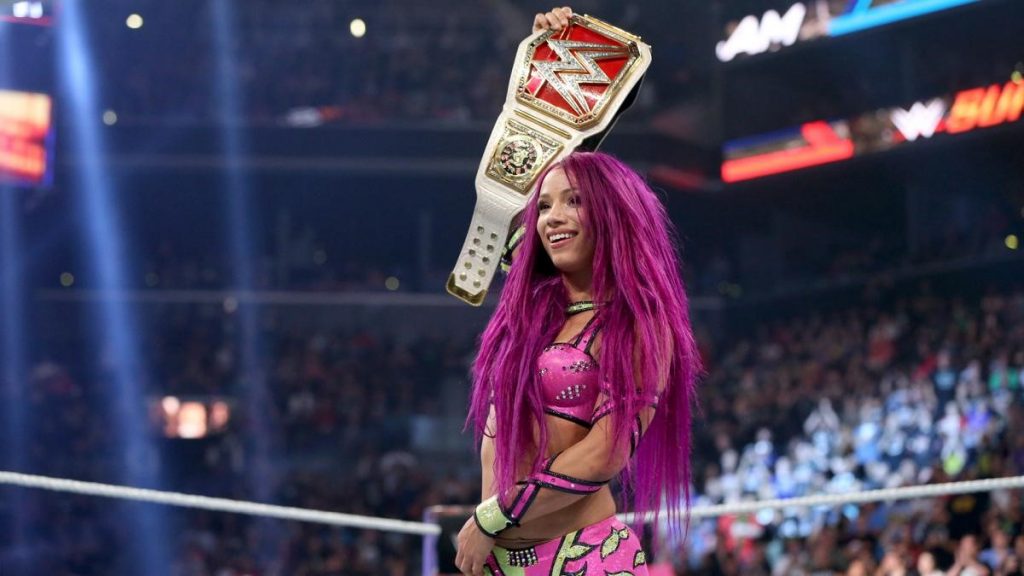 Sasha Banks finally was able to regain her throne and was able to win her first PPV Championship match on the main roster. Now that the title is on Sasha again the quality of the women’s matches should increase back to where they were regularly challenging for match of the night on shows. Sasha vs Mickie? Sign Me Up. Sasha vs Emma? Yeah, I’ll take some of that too. Perhaps if Bayley can stop getting booed, Sasha vs Bayley can be run the right way to produce new classics to add to their history. I hope the Alexa Bliss stans enjoyed her reign. (**3/4)

The Demon dispatched of Bray Wyatt with relative ease. After a build that I thought got both guys under, it was just a match. Not bad, not good, just more of a vehicle to get the demon back for the first time in a year. Bray Wyatt badly needs to turn face. It was the 4 year anniversary of his debut, and this incarnation of him has completely run its course.

Wyatt doesn’t tend to make others into bigger deals after fighting them, and he’s kind of the “big star isn’t in the main event, stick him with this guy” guy of our time. Now you could argue The Undertaker was that at one time, but Taker always had main event appeal and felt important aside from the main event. Wyatt is 2 levels below that. I haven’t bothered to try to digest a Wyatt promo in at least 2 years, and that’s unfortunate. However, feud after feud I continue to be justified. (***)

The Shield, Sheamus, and Cesaro had the pressure thrown on them from Smackdown’s tag match, which again was yanked off of the show for reasons I’ll never agree with, and they came through after a few quiet patches in their match. I was screaming for Cesaro and Rollins to be paired off more, but hey. We saw the introduction of Hoodie Ambrose, to add to the now famous Hoodie Melo; who is Carmelo Anthony wearing said hoodie, playing pickup basketball while being the most dominant player on earth. 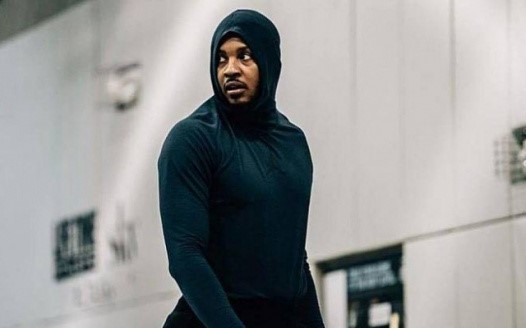 Hoodies aside, Rollins and Ambrose rolled to the titles as Ambrose became the first member of The Shield to win the grand slam in WWE. I’ve heard people describe this as a story match. Nah, it was just good wrestling man. I felt better about it a day later than originally. (****) Revised Rating, Original (***3/4) 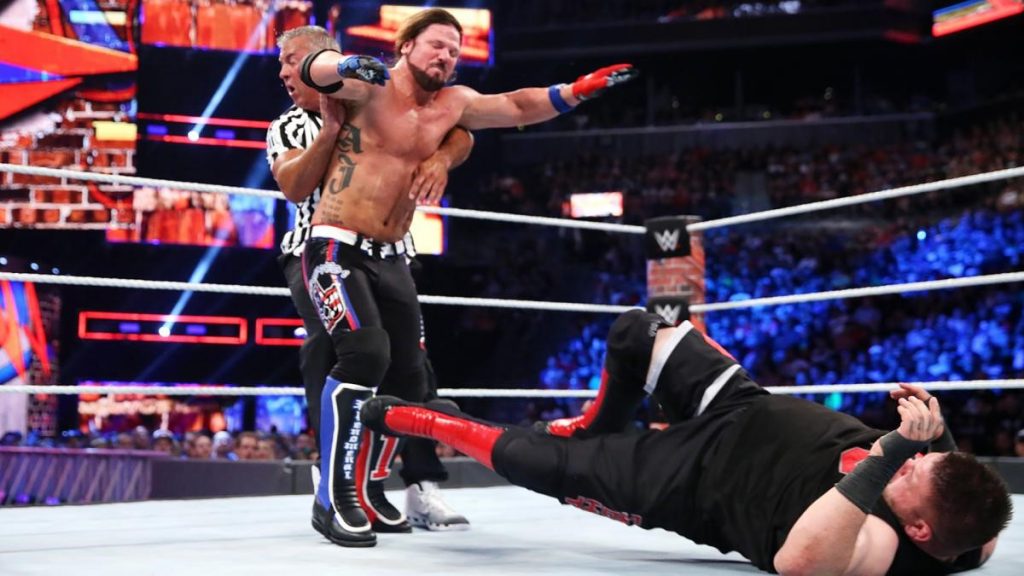 A perfect example of how WWE has held back AJ Styles in 2017.

AJ Styles and Kevin Owens had a match that once again didn’t reach the heights the two names would suggest due to gimmickry. I’d like to abolish the special referee stipulation as well, or at least put it on ice for a while. This wasn’t about AJ Styles vs Kevin Owens, this was about Shane McMahon who was sweating harder than both guys actually wrestling, and was as red as a Chicago Bulls road jersey. These guys should just do other things. Owens can head off, and eventually face Shane McMahon, and Styles can resume the US Open Challenge, as we long for the days when WWE allowed him to display the show to show excellence he displayed fresh off of coming from New Japan. (***1/2)

From day 1 I’ve said it, and I will continue. Jinder Mahal as the WWE Champion is an absolute disaster. Never has the WWE Championship been contested under such a cloud of mediocrity. As the reign began, The Jinder Hive, which I’m ashamed I have to admit exists for some ungodly reason, are willing to stand by him in almost any scenario, even as he takes WWE title matches to the negative star range as he did at Battleground in the Punjabi Prison. It reminds me of how supporters of the Pres- never mind. He was given an unfavorable situation, “Hey prelim guy! Use your 5 minute match tactics in main events! By the way, you’re now the champion! Good Luck!” I thought I was watching a rerun at the finish, as the Singh Bros once again caused a distraction loss for a main eventer. Apparently, all the babyfaces are stupid and haven’t seen Jinder’s movies. James Ellsworth was banned from interfering in too many matches for Carmella, but every PPV since May, The Singh Bros have been there to screw up WWE title matches. Who runs this brand?? 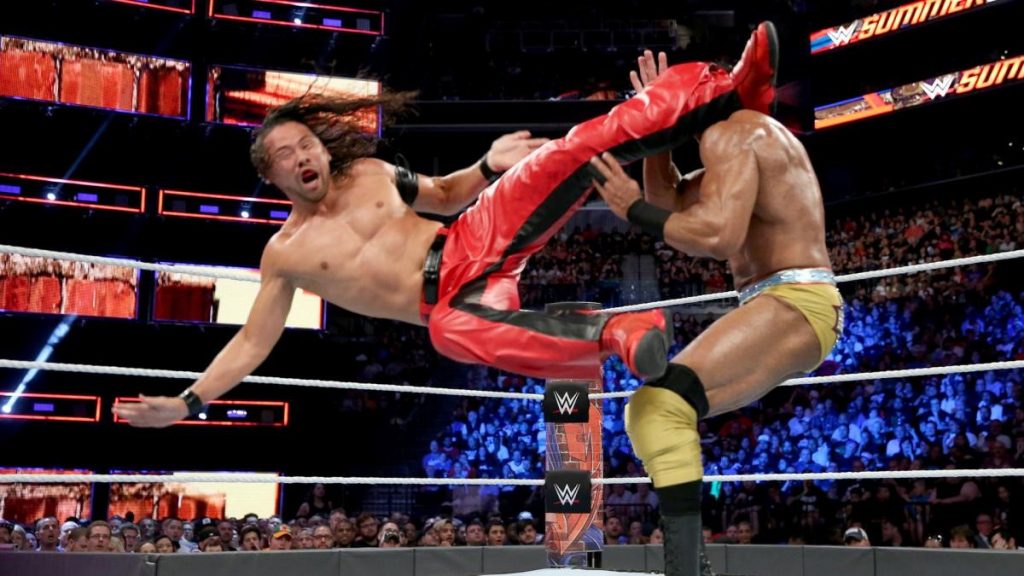 What a waste of time for Shinsuke Nakamura, who probably shouldn’t have gotten a WWE title match so fast, but once he’s there…YOU GOTTA PULL THE TRIGGER. Nakamura’s first WWE loss came to Jinder Mahal in which he looked like a dweeb while being the most over guy on the show during his entrance. This is an alternate timeline in bizarro land. Smackdown as a staff, record label and crew will continue to be poisoned and positioned as a lesser brand as a result of not stopping the bleeding of a dude who HASN’T DRAWN A DIME in the 1.3. My party sat with our mouths agape. Originally I thought it would be a DQ or Countout win for Nakamura. Never would I think they’d have him beat John Cena clean as shined shoes to lose here. Basic match, Jinder’s offense is dreadful. Poor Nakamura. (**) Revised from (**1/2) 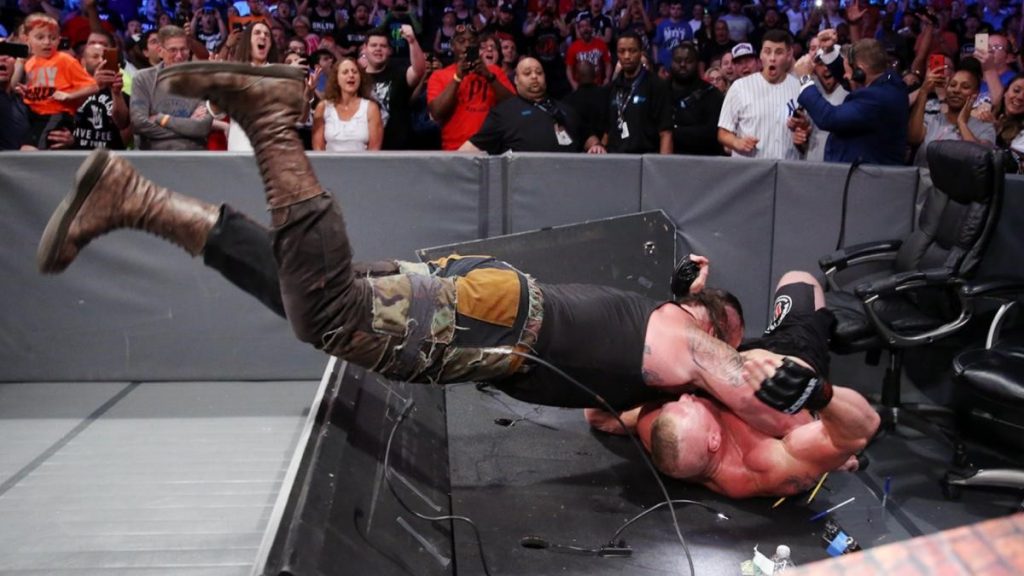 After that D level world title match, the main event came and it was every bit the car wreck we thought it would be. The biggest, most brolic guys all in a battle not only for the Universal Title but the mythical one of The Man. Braun Strowman is now that guy everyone. Two years to the day of his debut, and after a rough first year, he was let loose post draft 2016 and has gotten over The Old Country Way. Beating jobbers, then going through the mid-card with the help of Sami Zayn, then getting the better of what is becoming his generational rival in Roman Reigns, while doing cool stuff, FIGHTING OFF A MURDER ATTEMPT, and looking Brock Lesnar eye to eye to let him know his days are numbered. Strowman is the reverse Jinder Mahal. While Jinder may look the part, Strowman IS THE PART. His organic rise may have birthed WWE’s next great big man. But Brock Lesnar pinned Roman Reigns to retain the title to keep it off our TV screens. He may not have the physical belt, but for all intents and purposes, Braun is our champion everyone. (****)

If Sasha vs Alexa and Big Cass vs Big Show are flipped with the cruiserweight title match, and the Smackdown Tag, the show probably comes off better. The WWE title match was a joke for a Summerslam match, Cena just showed up for his check, and AJ Styles’ greatness can only stretch so far in the face of WWE’s designed finishes. Long gaps of terrible content surrounded a few good things. It also took a while for it to get going. The pre-show match was the only thing that blew me away, and it’s not even a feeling of anger that WWE gave me, it was just disappointment. They really are capable of so much more.