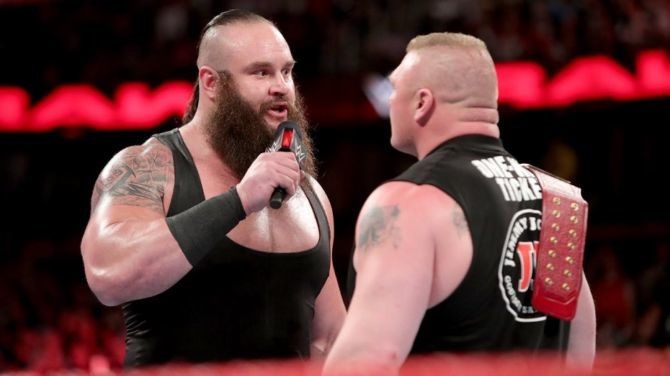 Braun Strowman has the juice. What is the juice you might ask? Well for those unfamiliar, Tupac Shakur and Omar Epps starred in a film in the early 90’s called Juice. The “juice” was sort of an invisible spirit that was passed from the most dangerous person in the neighborhood to the next. It represented an attitude or charisma that pulled people toward them with amazement and fear. The person with the juice usually had just murdered someone also. Go out of your way to see it if you haven’t. It’s often theorized that 2Pac adopted his Bishop character into his rap persona afterwards.

Nevertheless, Braun Strowman is now the man with the juice in WWE. He represents one of the most organic things in WWE to come along since Daniel Bryan’s rise to the top. Starting with his destruction of James Ellsworth and several other jobbers, Strowman got people’s attention by doing the oldest thing one can do in wrestling… just destroying guys, and looking unstoppable while doing it.

After his jobber run which saw him pinning up to 4 guys at once, his calls for competition were answered by the great Sami Zayn. Once Strowman gets where he eventually goes, people must not forget Zayn’s role in pulling Strowman out of squashmatchville. His 10 minute challenge match, and Last Man Standing effort with Zayn started to win some of his biggest detractors over. It’s not like the detractors were wrong either. In late 2015 when those rumors about The Undertaker vs Braun Strowman for Wrestlemania 32 went around, it was horrifying. Slowing all the way down with Strowman gave him the chance to break out of the Wyatt family and forge his own path. He also hit another mark when he and The Big Show main evented Raw and broke the ring.

Once he started having good matches with Roman Reigns he was fully formed. Reigns and Strowman will always be able to resume their feud because it just works. A popular thing I saw was, “Well he’s only getting cheered because he’s beating up Roman Reigns.” I didn’t buy that for a second. The night after Summerslam Strowman showed he’s never been more ready than he is now. When he picked up Lesnar and dropped him twice with the Running Powerslam then held up the Universal Title, I didn’t see Roman Reigns anywhere in sight as the Brooklyn crowd fully embraced him.

After wanting to give the juice to Reigns for so long, Strowman had repossessed the juice by force by dominating the man Reigns could never put away, Lesnar. The night after Wrestlemania Strowman let Lesnar know he was on borrowed time, and the night after Summerslam he served Lesnar notice, that the days of running from him in multi-man matches are over.

Fans are with Strowman despite him not being an elite talker, he’s just good enough to where his actions of destruction compensate for whatever may be missing verbally. After thinking he was the next great heel monster, I’m convinced he was miscast as he now is the neighborhoods big brother who will beat up an absentee champion with tremendous force to bring the title back to the fans.

Strowman doesn’t have to pander, or act childish. He left us in awe when he escaped a MURDER ATTEMPT, and displayed various feats of strength. He’s a face now. We’ve arrived at his launch pad. Ryback had it when he entered the Hell in a Cell vs CM Punk, and they never recaptured it with him. WWE, PLEASE do not get cute, just continue to nudge Strowman closer to the prize.

Braun Strowman vs Brock Lesnar could have main evented Wrestlemania 34, instead we’re getting it at No Mercy. Now there’s an argument for that being a mistake, but that’s another column for someone else to write. I’ve advocated on Chad Matthews’ podcast “The Doc Says”, for WWE to lose themselves in the calendar more, and I can’t think of a better example for it than this could be.

All putting the title on Strowman now would force WWE to do is dig within their creative minds to figure out how to handle a monster babyface, and ride him into Wrestlemania season. Maybe getting more than 1 match out of these guys is the best way to handle things. Whichever way we get there, Braun Strowman will be the one showing up with the juice.

Rich Latta is a Senior Contributor to SocialSuplex.com and Host of the One Nation Radio Wrestling Podcast. Send him a tweet @RichLatta32 or drop a comment  below.