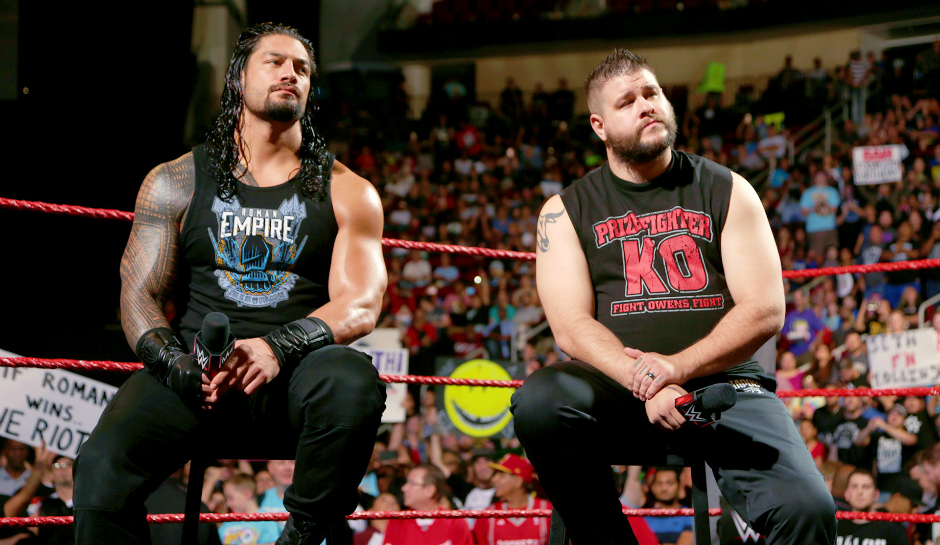 We’re winding down the year and it is time to start thinking about best of the best in WWE. Crowning 2017’s Wrestler of the Year should not be this difficult. With the embarrassment of riches WWE holds on their main roster, the only question that should be asked is, who stands out among the standouts? Strangely, 2017 WWE has been a year in which no one has stood out with a complete resume. There is a huge flaw in almost everyone’s candidacy.Bill Simmons pioneered the thought in my mind that not all MVP trophies are worth the same thing. For example, Steph Curry winning the MVP in 2016 on a 73-9 team seems like a much bigger deal than Karl Malones 1999 lockout MVP. Sometimes it should be a 100 LB trophy, other years there should only be a 10 LB version.

Last year WWE could have handed AJ Styles a 100 LB trophy based on his match quality, great feuds, and overall versatility in which he stood over other strong candidates in an incredible year for WWE. This year, I’m pretty sure we’re giving out a 10 LB award due to the lack of standout events and candidates. For argument’s sake let’s look at the field.

Braun Strowman – The man thought to be the favorite one would assume is BraunStrowman. However, WWE didn’t even see the point in booking him in a match at Wrestlemania. He’s excelled in his first year in the main event scene, but he’s been a stop and start victim at least twice. Still, he’s made sure that he will be a player in WWE going forward, but he would be an MVP that wouldn’t stand up to other past winners.

Jinder Mahal – Probably the worst WWE title reign in modern WWE history. With his abysmal PPV resume, his only claim to even be mentioned here is WWE’s decision to do something insane. He got in crazy shape this year though and is always dressed excellently.

Neville – He excelled like a small school in a small conference, that got forgotten when it was time to seed the playoffs. He was thanked for his services to the company via WWE having Enzo Amore kick him in the dick for his championship in a DUD match.

Roman Reigns – Did this feel like a year where he was head and shoulders above everyone or was it more career rehab? He backdoored his way into a match that wasn’t the main event of Wrestlemania until the day it happened and made his character as confusing as it’s ever been when he tried to MURDER Braun Strowman, and no one asked him about it. Wins over Cena and Undertaker only made him more railed against. He’ll finish Top 3, but anything higher is up to him.

AJ Styles – Styles has had water thrown on the flame he lit from Wrestlemania 32 to Wrestlemania 33, as he sits in a corner with the United States Championship without producing anything that would have stood up to his 2016. I want my 2016 AJ Styles back. He was cuffed to Shane McMahon and still prospered at Mania 33, but after that he hasn’t touched a main event since. Last year’s MVP will have to come on strong.

Kevin Owens – Kevin Owens had probably had the best blend of the wrestling, and awesome moments. He’s the top guy on Smackdown with or without a championship. He’s consistently delivering good interviews, and in a year where there aren’t clear breakout candidates, his consistency may be his greatest argument.

The Miz –The Miz should have ascended back to world title status this year, but he’s built on last years excellence as much as someone could without getting a real promotion. He still finds a way to make the Intercontinental title feel prestigious, and has been tasked with rescuing Bo Dallas and Curtis Axel. However, without the true promotion to the main event it will be hard for Miz. Maybe this next program gets him there.

Shinsuke Nakamura – Even being a huge Nakamura fan, I couldn’t find a plausible reason to move the goalposts in his favor. Rarely have I seen the man I know is buried deep inside. Whether it’s been a debut and follow up that took him out of the ring for a month and a half, to essentially every feud he’s been in being underwhelming, Nakamura hasn’t been the sure thing many of us thought he would be thus far. He’s shown flashes in stellar TV matches against Ziggler, Cena and Orton but his PPV work leaves plenty to be desired.

Randy Orton – Has there ever been a long term main eventer with a worse year in main events than 2017 Randy Orton? This man was the common thread of the worst WWE Title match in 30 years at Wrestlemania, The House Of Horrors, and The Punjabi Prison Match. Orton has always wrestled to his opponent’s level, so I feel confident in saying if he got to wrestle AJ Styles for 3 months instead of Bray Wyatt and Jinder Mahal, they both would have lifted each other into greater performances. Even a Royal Rumble win couldn’t help Orton.

There are still two months left in 2017 for someone to grab this award, but at the rate things have been going, should we introduce tag teams into the conversation? Since Wrestlemania, both Raw and Smackdown have Made Tag Team Wrestling Great Again with The Usos, The Bar, The Shield Bros, and The New Day killing it in segments and on PPV’s. If the slow pace continues or the pack stays together enough, I’m not against thinking outside the box and crowning a Tag Team as the MVP. If that doesn’t tell you this isn’t a normal year I don’t know what will.

Whoever ends up coming out on top, it will be something to remember but we fans and journalists will remember 2017 as a year where so many weird things happened. We had Goldberg go into Wrestlemania as the champion, a career jobber win the world title, not kill it, and hold the title for over 100 days, and the Raw Champion be off television for chunks of the year. Injuries took guys like Samoa Joe and Finn Balor out of the running because there just wasn’t enough for them. Too many things felt the same or uninspired. Let’s hope we get the greatness 2016 brought these last two months.

Rich Latta is a Senior Contributor to SocialSuplex.com and Host of the One Nation Radio Wrestling Podcast. He still can’t believe Razor Ramon lost to the 1-2-3 Kid. Send him a tweet @RichLatta32 or drop a comment below.