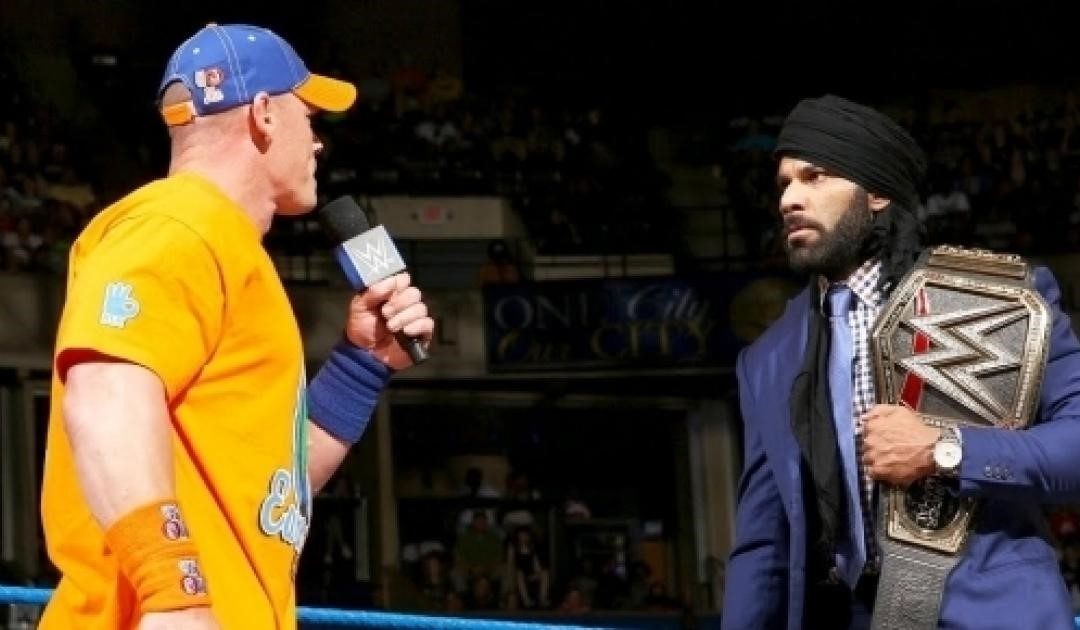 If you were under a rock this past January, John Cena won his 16th world title from AJ Styles at the 2017 Royal Rumble in what many people are penciling in as the WWE Match of The Year. It was a special moment not only because of the match, but the dome stadium WWE was in, and it finally tied Cena with The Nature Boy Ric Flair’s 16 recognized World Championship wins.

If we look back to John Cena’s first title win back in 2005 at Wrestlemania 21, and what is rumored to be on the table for Wrestlemania 34, the situations have become eerily similar. Stop me if you’ve seen this before.

A suit-wearing Smackdown champion plucked out of obscurity or worse that was pushed straight to the title, who has no damn business holding the WWE Championship, who escapes title defenses against fan favorites who are way out of his league, in what turn out to be badly rated matches that end with some kind of fuckery, who gets a chance to learn on the job while being a widely polarizing figure as most fans beg for ANYONE to take the belt off him because he is a radical departure from the identity the show previously held. I’m not sure if Cena is set to wrestle Jinder Mahal or step in a time machine and fight against JBL and The Cabinet. 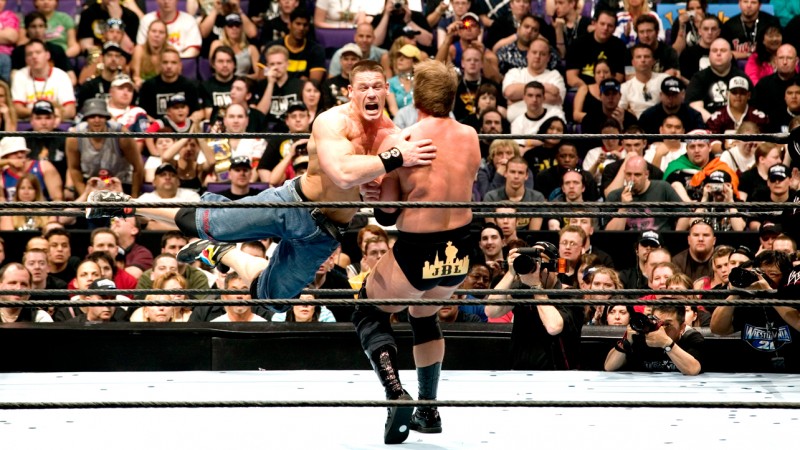 If the rumors hold true, Cena will go for #17 in the Superdome but the question is, does this actually need to happen? Did everyone see the average bout these guys had during the summer with a non-finish? Does another Wrestlemania cycle have to be dedicated to establishing stars of the past? I’d argue, hell no. Let me make this clear, there is nothing wrong with John Cena breaking Ric Flair’s record, and quite frankly I hope Flair is used at some point in whatever storyline gets him to break the record.  However, Wrestlemania is NOT the place to do it. If John Cena can put over Roman Reigns clean at No Mercy, he can win his last title outside of Wrestlemania.

Since WWE has renewed their focus on the Big 4 events by making them travel destinations and over 4-hour shows, I can’t think of a better place for Cena to break the record than the 2018 Royal Rumble. It would be a mulligan for last year’s inexplicable two-week reign, give Cena a final run with the WWE Championship and allow him to retain his status on the marquee at Wrestlemania. He can do this while fending off the previous champion, Mahal, at the event before Mania, and head into New Orleans for a match against whoever would offer the best scenario, which is often what WWE goes against, but I’m trying to remain hopeful here.

Whether it is Shinsuke Nakamura, AJ Styles, or Kevin Owens it is a stronger match than anything involving Jinder Mahal, where WWE is positioning what they think to be a no-brainer situation where Cena would be cheered. I believe there would be a certain amount of negative energy surrounding what should be a joyous occasion that will stain what should be a mammoth accomplishment.

With Cena’s part-time status it would be less about the WWE Championship if he won it at Mania and more about his schedule when he eventually loses the championship, which could come at the next big show after Wrestlemania. After a year of Brock Lesnar holding 1 title hostage, and the other one being contested in bad matches that had roaches on the mat, Singh Brothers, and the Punjabi Prison, the WWE Championship needs some rehab, word to Amy Winehouse.

There is also another option the Cena haters would enjoy. Keep him away from this situation altogether. Let someone else topple Jinder Mahal and save the WWE Championship. I don’t know what WWE has planned, but it looks like half of their plan has started to reveal itself. I looked for parallels and I’m presenting the situation to everyone reading this.

Do I want to see Jinder Mahal’s title reign end? Hell yes, it should have never gotten started. Am I a John Cena fan, yes I am. However, Wrestlemania continuing to be the show where the past triumphs over or usurps the future can go the way of the dodo as far as I’m concerned. We don’t need this, John Cena doesn’t need this, and WWE doesn’t need this either. John Cena should be defending his final championship at Wrestlemania 34, not winning his first all over again. Or Jinder Mahal will go over him at Wrestlemania at which point, I’ll light myself on fire.

Rich Latta is a Senior Contributor to SocialSuplex.com and Host of the One Nation Radio Wrestling Podcast. He wants to make the WWE Championship Great Again. Send him a tweet @RichLatta32 or drop a comment below.