Latta’s Lariat #32: AJ Styles Has Been Saving WWE All Year & Thoughts On The Maharaja 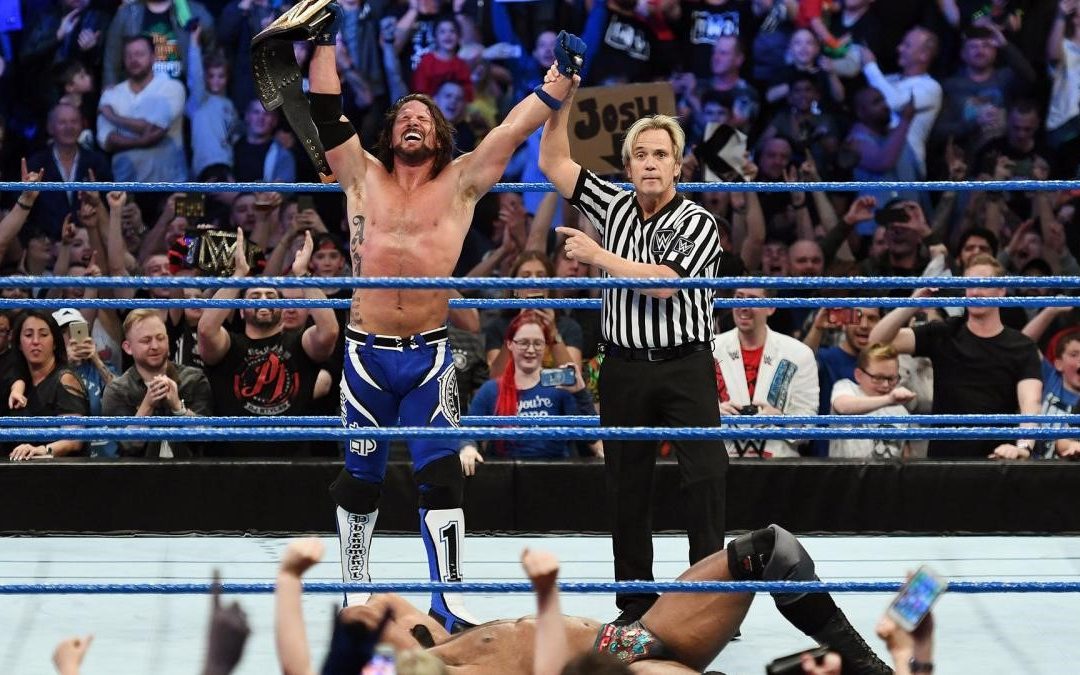 This week on Smackdown Live which emanated from Manchester England, AJ Styles defeated Jinder Mahal to win his 2nd WWE Championship, ending the highly polarizing first reign of The Maharaja. Jinder, a workout warrior and ultimate throwback of a character turned in his best performance on the last night of his reign like many champions before him. (Styles, Cena, Nikki Bella, & others) To that, I salute. However, AJ Styles winning the championship restores the natural order and resets Smackdown Live’s maximum potential as a show.

Jinder was surrounded by superior talents at every turn during his reign, and while he had the redeeming quality of looking fresh in a suit and turban as the champion, it seemed like everyone else around him had to pull their own weight a little harder to pass this off to the level it even did. He was hidden at odd times during weekly shows, and usually lived out of the main event while champion. He’s probably my least favorite WWE Champion ever based on the circumstances his rise came under, but he got 160 plus days out of very limited ability. Ironically, with Jinder being a USA hating heel…that’s the American Dream. To be just serviceable and get rewarded for it tenfold.

Even if Mahal wins the championship again, it won’t be the same as this first run, which has created some of the sharpest division among fans that I’ve seen since CM Punk lost the championship to set up Twice in a Lifetime with John Cena and The Rock. WWE probably has a midcard star at minimum for life with him, and depending on how things break, he may be set to get a better version of what this could have been if he gets a shot at the United States Championship. Hell, let him hold that thing for 250 days and you’ll rebuild him immediately. Chad Matthews has theorized that WWE subscribed to the…”AIM….FIRE!” philosophy, and nothing personified that statement more than the rise of the Modern Day Maharaja. With more care given to transitioning him out of the jobber role, it would have put him on a solid foundation to look less out of place than he did at times. The WWE Championship has had a rough time with the combination of Bray Wyatt, Randy Orton and Jinder Mahal, but brighter days are ahead.

With that said, AJ Styles saved the WWE Championship just as he’s saved WWE all year in dire situations. Sometimes it was quiet, as he played the third wheel in the budding Shane/Owens rivalry over the summer, and solidifying Baron Corbin after he sunk into the depths of hell following Summerslam. But all the other times, it was WWE’s best big match wrestler showing up to rise in the face of unenviable tasks.

AJ Styles came into 2017, riding a wave that Quavo, Drake, and Travis Scott would have told him to not let anyone on. After being everyone’s wrestler of the year in 2016, Styles was tasked with making John Cena’s 16th World Title win as good as it could be. The result? The clear leader for WWE Match of The Year in a non-WrestleMania Dome Show. He was the man who carried the Elimination Chamber, and was the driving story of the WM build, above the WWE title. Next, he carried essentially a civilian to a 4-Star match at WrestleMania that I went into kicking and screaming about. While I still maintain that “WM 33 Styles, 99 OVR”, who would be a moments performer in an NBA 2K Pack on MyTeam mode, would have had a 5 with any normal wrestler on that night, he got through it on his road to turning face.

From there he went into a supporting role most of the summer which was certainly frustrating, but losing the U.S title opened his value up a bit more. For most of the summer he felt like Bret Hart in 1995, wading through the mid-card, while someone with limited experience on top is World Champion.

However, what may go down as the catalyst for this title win is the respect AJ earned from fans and probably within the company, as he came to the rescue after an 18 hour flight from South America to Minnesota to give Finn Balor a 4 star match when he didn’t have an opponent despite jetlag at TLC. This will be talked about one day on the eventual AJ Styles: “Simply Phenomenal” documentary. (Cut the check for that title WWE.)

We don’t tend to get babyface champions in WWE much anymore, probably because WWE is on a serious cold streak of handling them. AJ Styles has been WWE’s most versatile performer throughout the year, and his time to shine at last came when we least expected it. The WWE Championship looks better, the presumed Survivor Series Lesnar-Styles match is a blow away match on paper that instantly generated awesome Social Currency on a week Kenny Omega vs Chris Jericho was announced, and re-energized most of WWE’s most loyal supporters not only about the title, but WWE’s direction.

AJ Styles is as important as it gets for WWE, and how he is handled going forward is the key to their creative nirvana. He’s a walking dream match in most scenarios, and he’s proven he is the ultimate break the glass in case of emergency roster member right now.  Let’s hope he at least gets to WrestleMania this time, championship in hand with something else to prove.

Rich Latta is a Senior Contributor to SocialSuplex.com and Host of the One Nation Radio Wrestling Podcast. He never tried to roll his eyes back like The Undertaker because he was afraid they would get stuck. Send him a tweet @RichLatta32 or drop a comment below.