Latta’s Lariat #6 : Wale, The New Day and The Usos Do It For The Culture 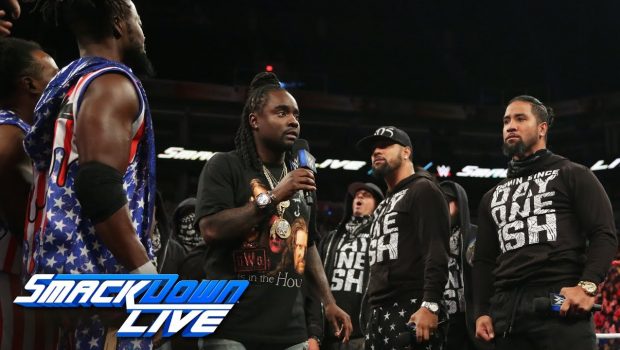 Full disclosure, I’m a hip hop artist, and have been for most of my formative years and that weighed heavily on how I received this segment. That being said Wale, The New Day and The Usos gave us one of the most authentic segments of all-time on Smackdown.

We yearn for things to be real with wrestling, and what is more a test of the reality of someone and their manhood than a rap battle? Having been in several of them in my life, and feeling like I only lost 1 rightfully, I can tell you the pain of losing a rap battle is more embarrassing than losing a fistfight. For those unfamiliar, it’s the ultimate showcase of showmanship, lyrical ability, comedic timing and downright disrespect for the person standing in front of you.

Now John Cena rapped for years on WWE TV. It was NOTHING, and I repeat NOTHING like this. When the rap battle between The Usos and The New Day was announced I was nervous, but figured Big E could be clever, and Xavier could be witty. I didn’t expect too much out of Kofi, and had some expectations of The Usos because of their evolving promo style. Then I heard it would be hosted by Wale.

Wale is one of the biggest celebrity wrestling fans there is. He tweets about his feelings on the product, goes to shows and sometimes walks around with a blue version of the Bret Hart WWF Championship. He even followed me on Twitter a few years back, and appeared on One Nation Radio just to talk with me about Wrestling. There has always been a great disconnect on how to present Hip-Hop in WWE because it never felt like the people in charge knew what they were doing. Whoever got out of the way, THANK YOU!

Unquestionably, just off of the lyrics, The Usos ATE The New Day. This is not up for debate. The tag team rhyme scheme was similar to the delivery we’ve seen with their non-rhyming promos since February when they took off on American Alpha. At the time their delivery style was not shockingly going over a lot of fans heads. It was a page directly out of 2-on-2 rap battling where you have to speed up your listening because they don’t slow down.  It seemed like people just thought they were talking really loud and fast which wasn’t the case at all, at least to trained ears.

The Xavier Woods line from The Usos alluding to the Paige scandal garnered most of the praise, but The Usos should also be praised for their rebuttals and knowing where The New Day would take most of their disses. Someone has to lose, and aside from some dry spots during Kofi’s verse which he actually got the crowd going via the comedy route*, they were impressive as well. I got the feeling that 4 out of the 5 guys battling actually have done this before and studied the art form of battling, which as an MC myself, I have nothing but respect for.

Wale even snuck in a SMMMMIDDDACKK, reference which refers to SMACK DVD. One of the longest running underground battle rap outlets, along with a “DON DEMARCO” which is Jay-Z’s voice dropped as an adlib by the DJ after devastating lines in battles. Unquestionably it was the “WE IN HERE**” moment of the battle.

However, just like some rap battles, this one ended via physicality and The Usos getting DQ’ed to spare The New Day from the official loss. There are famous rap battle fights all over the internet, and this was done in such a non-corny way, I was shocked.

As I previously mentioned, rap hasn’t always been done the best way in WWE. Hell people of color haven’t been represented well at all. Sometimes I give WWE hell for what they do in booking and week to week stuff, but I offer nothing but praise for them here for taking a risk, and recognizing they don’t know the elements of a rap battle. I mean who were they going to ask Triple H? Michael Hayes?

They didn’t just have pre- rehearsed lines, they had flows. LOTS OF THEM. Not only is this the best example of hip hop ever in WWE, it should be a blueprint for celebrity involvement going forward. Wale, The Usos and The New Day did it all without swearing, and most importantly, they did it for the culture.

* The key to beating someone you have no business beating in a rap battle is comedy. Battling a funny dude sucks.

* I agree with David Dennis saying Wale yelling “DON DEMARCO” in the mic is probably the blackest moment in WWE history.