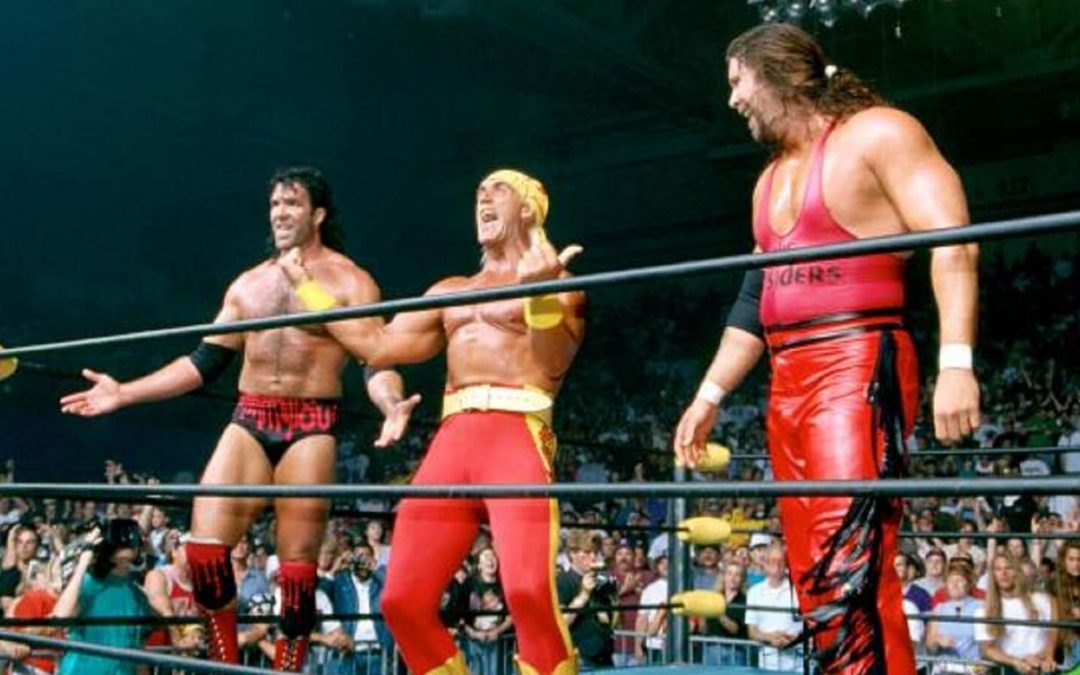 I will now put my personal feelings on Hulk Hogan aside to commemorate this occasion.

21 years ago today, Hulk Hogan shocked the world and joined Scott Hall and Kevin Nash as the third man at Bash At The Beach 1996 to form the New World Order. In the process, he finessed another long run at the pinnacle of the business while being the greatest heel of the 1990’s, and dominated WCW with a group that was influential, suffocating, and downright cool at times.

On the initial turn, Hogan cut the classic promo where he told the fans to stick it, and told Eric Bischoff that “Without Hulk Hogan, you would still be selling meat from a truck in Minneapolis!” It was possibly the funniest single diss ever. He was unleashed without restriction, not that he had much anyway because let’s face it, it was Hulk “Creative Control” Hogan who gave us such gems as The Butcher headlining Starrcade ‘94, The Alliance To End Hulkamania 8 on 2 match at Uncensored ‘96, and all that Dungeon Of Doom foolishness.

Fans filled the ring with trash, as the future of pro wrestling was shown to them in sudden fashion. There was also a dude in an ECW shirt going crazy with joy in the first few rows. Gone was the old WCW, and it was replaced with something darker, and something more realistic. The first 9 months of the N.W.O were absolutely magical from a story standpoint. They moved as a unit, then swelled to an oversized unit, stole the championships and became the story of the promotion.

It was more than a faction, it felt like a gang. Hall and Nash gave Hogan some of their cool, while lifting the WCW Tag Titles to World Title prestige. How I saw it was, after Hogan did the initial shock, he was kind of just the name to draw the attention. Hall and Nash had the juice week to week and were the men to see. If I hated Hulk Hogan, which I did, with the way he stank up main events and cheated to keep the belt and never wrestled on Nitro*, I was fascinated by The Outsiders.

I was a WWF kid. I’m originally from Springfield, Massachusetts, square in the territory of 90’s WWF. They would run the Springfield Civic Center, and my dad who was a cop would just walk us in the building the back way without tickets.** My earliest memories are the buildup to WrestleMania 12, and in that time every weekend my grandmother would rent me video tapes of events back to SummerSlam ‘88 to piece together everything I had missed out on. I was so angry that Diesel and Razor Ramon were gone, and didn’t understand all this Hall and Nash stuff at all. I figured they were going to WCW to show that the WWF was the best. Oh they were going to do that, but not in a way my 7 year old mind thought they would.

By now, we all know how things played out with the group. The sustained excellence turned into repetitiveness, which turned into a split later and it just became wrestling. However, during that initial run it was more than wrestling. You almost had to start the sport over and disregard everything you had seen prior to it in retrospect, and at the time even as a kid I knew this would be the most stacked group I would ever see.

If I could compare the N.W.O to a movie, it would have to be Casino. One of the best lines in the movie was, “Between, Nicky, Ginger, me and my license…we managed to f**k it all up.” Which came from Sam Rothstein, and the N.W.O was the same way. They got all the money, all the power over booking, they even had the boss of the company in their pockets, and in the end the egos and lack of evolution made them fuck it all up.

The N.W.O lasted much longer than it was supposed to. It should have disbanded at Starrcade in 1997, and WCW should have taken a new beginning and integrated guys like Bret Hart, Chris Benoit, Chris Jericho, Booker T, DDP and Goldberg to the prime positions as soon as 1998 began so they could avoid the issues they ran into that would foreshadow their critical collapse in 1999; which came before the business collapse in 2000.

But I’ll always remember how the N.W.O made me feel as a kid. It wasn’t wrasslin, and at that age I barely knew what “wrasslin” was supposed to feel like. Eric Bischoff found a winning idea and rode it a tad too long. However I can’t blame him, because look at us; we’re still talking about and will remember The N.W.O……

Rich Latta is a Senior Contributor to SocialSuplex.com and Host of the One Nation Radio Wrestling Podcast. Send him a tweet @RichLatta32 or drop a comment on below.

*Bruh I hated Hogan then.

** My Dad was finessing his status as a cop to just walk me in to see Wrestling. I hope I parent that well.