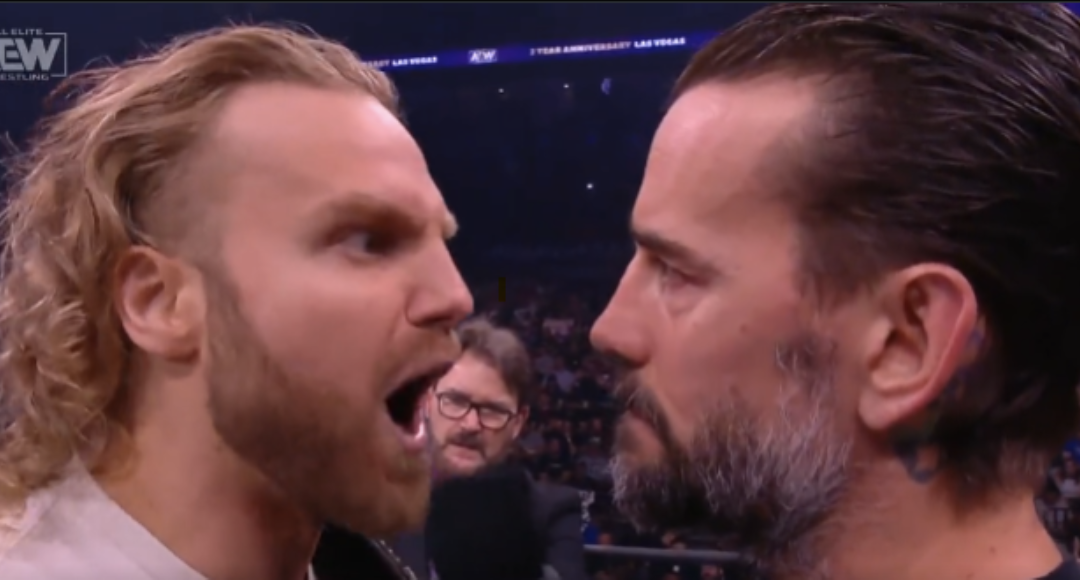 In 1996, deep inside the paranoia of the East Coast/West Coast rap war, The Late Great Tupac Shakur released what would be his first posthumous album, “Makaveli: The Don Killuminati 7 Day Theory.” The name of that album being a mouthful aside, the first song on that album was a track called “BOMB FIRST” which took aim at the entire East Coast, (Nas, Jay-Z, Big, Mobb Deep & more) that stated his intentions as plainly as one could. He was going to fire upon the competition before they knew it was coming, and ask questions later. Tonight, Hangman Page carried some of this energy.

The question some still seem to want to know after Hangman Page’s excellent promo tonight is “Why does Hangman Page hate CM Punk?” I believe he too laid it out plainly, but this wouldn’t be the first Hangman story beat to go over folks’ heads. One can think of him tying Adam Cole to the ropes in response to Cole doing it to him during their title match which drew boos. His feud with Cole was another example of Page defending not only the championship, but AEW itself, going into Orlando NXT territory and putting Cole down while rocking gear that did him no favors in the notoriously open-minded state of Florida.

When Page stated he was here to defend All Elite Wrestling from CM Punk, he captured the essence of the conversation that has lingered around AEW in some circles over the last few months. Hangman hasn’t been the most visible part of the programming, which has drawn its own share of criticism and is here to fight a man that seemingly is the face of this new wave of wrestlers entering the promotion.

AEW has made an event of parading new signings into the company, thrusting the company into almost an identity crisis on what and who this promotion is about. AEW originals have departed the company from lower-level talents all the way up to founding EVP in Cody Rhodes. Kenny Omega’s injury absence throughout the first half of 2022 has also been a huge change. Get well soon! AEW was never going to stay the same as it was, and the part of the growth is opening the doors to talented others.

But it wasn’t going to stay love, peace, and kumbaya within a fanbase that has rallied around the company and defended it from attackers from day one. AEW is analyzed daily on a toxic level by people wishing it didn’t exist, and some of that criticism has come in the form of complaining about the imports in good and bad faith ways. How they’re booked. How long until they will win a title? if there’s room for them at all? How many of them will show up? Is this signing too old? Will they go over the home stars in damaging ways like when WWE wrestlers went over TNA wrestlers? It’s natural for a fanbase to be into the idea of “their guys.”

To some, the spirit of the promotion has been in question as former wrestlers from WWE, and NXT have shown up and in some cases made their personas diametrically opposed to what has carried the company this far. From a fan standpoint, I side-eyed The Blackpool Combat Club’s initial promos and never-ending squashes juxtaposing their form of violence against what some would term “Bullshit.” Their pivot to attacking sports entertainers has been easier to digest for me because it has allowed for the crowd to join in with them rather than watch people they like get sacrificed to them in the name of their mission statement.

Hangman Page, standing face to face against a man that showed up after the coast was clear and a runaway success, cast himself as the leader and defender of All Elite Wrestling in a way tonight verbally that matched his physical performances. would defend AEW. The old AEW if you will.

CM Punk has smiled and ridden a wave of nostalgia while attempting to crib as many Bret Hart sequences as possible in every city. He’s been a tremendous asset businesswise, helping drive increased PPV buys since his arrival and having some good and even great showings against Daniel Garcia, Eddie Kingston, and later MJF. However, he feels like the past. He mentioned to Page he paved the roads Page was later able to walk down. The part he didn’t mention was the elevation of the craft that Page and others like him have carried into a new era of wrestling.

Hangman Page isn’t recreating 1993 King Of The Ring because he’s pushing the craft further. He’s on an incredible hot streak of championship matches that will be VERY kind to him historically. CM Punk is no longer innovating in his current form, and for some that is perfectly fine, because Punk is a special wrestler who after 7 years away never lost that connection to the people. When Hangman said he wasn’t interested in doing a Bret Hart tribute match originally, it drew boos as if he said he planned to piss on the belt and sign to WWE. There was also a barb about workers’ rights in his most recent promo that would have been VERY INTERESTING had he gone further into it.

It puzzled me because up until this point Page had been such a beloved tentpole performer of the promotion. I joked on One Nation Radio for months that he is the story of the promotion from its inception. This latest chapter in that story sees him as a defender of the early energy of the company, flaws and all. He went on a 2-year journey that saw him yank the promotion from Kenny Omega, he turned back Bryan Danielson in a pair of classics and decimated Adam Cole in a way where he established he was several levels above him. At this point, there is no better choice to “defend” AEW than Adam Page.

Barring a CM Punk heel turn that shows he was a snake in the grass (THAT IS DEFINITELY ON THE TABLE) I don’t see Page coming up short here. Hangman wanted to skip the pleasantries and bomb first on CM Punk because sometimes the greatest defense is a great offense. And after CM Punk gets it, it’s on to several other corny sounding motherfuckers.

Hangman Page is asking us what side are we on?