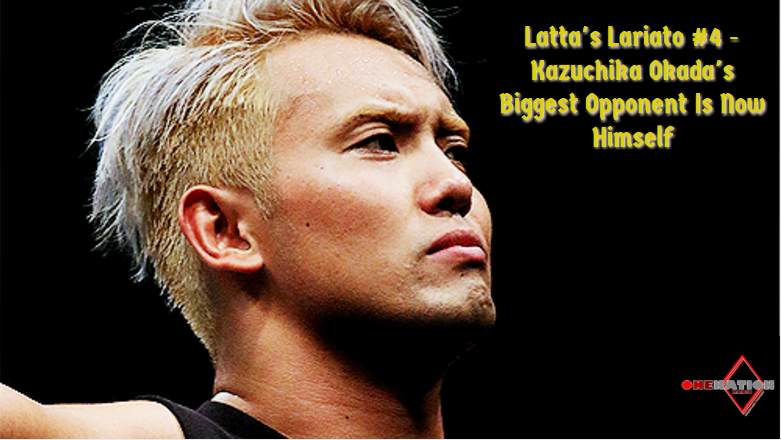 Wrestle Kingdom 12 closed with the same man on top of the mountain that Wrestle Kingdom 10 and 11 did. Kazuchika Okada in the last 3 years has turned back Hiroshi Tanahashi, Kenny Omega and Tetsuya Naito on New Japan’s grandest stage, The Main Event of The Tokyo Dome in two legendary matches and 1 other great one. In his 3 defenses he’s had to rise to the unique challenges of vastly different opponents of all styles while finding his own inner resolve to show that he is the new Ace of New Japan Pro Wrestling, the greatest overall champion in Professional Wrestling today, and possibly of all-time.

Most recently, Okada extended his record-setting IWGP Championship day’s record and is in the midst of the longest concurrent reign of all-time. Having gone through all his challengers over the past year plus, every time he steps up to defend his title now becomes a battle with himself as much as any opponent.

Okada’s diverse opponents have all taken a piece out of him thus far and targeted him in different fashions. With Naito it was a tactical and mental war, with Kenny Omega it was an athletic challenge that rewrote the sport, with Shibata it was Strong Style at its strongest, and during this reign he’s been through two grueling G1’s that have been amongst the stiffest challenges a champion has ever had to navigate through. Now, Okada has it all. He’s not attempting to take the throne from Tanahashi anymore, IT’S BEEN HIS. But where does a man who has everything go now that he’s reached such a peak?

Kazuchika Okada’s next challenge isn’t SANADA, despite that being billed as the IWGP Championship match at The New Beginning. His challenge is against himself, and history. How long can he push his own excellence? Whoever ends up defeating him for the title isn’t the next star being created, Okada will be the story, and it will be, “How does Okada come back and get what belongs to him.” I’m expecting him to win the G1 this year after losing the title sometime this summer, but what New Japan does so well is balancing predictability with unpredictability. He’s chasing the ghost of Inoki at this point, as New Japan’s primary mission since 2012 has been to demonstrate that this guy is the single most amazing champion New Japan has ever had, and I can’t think of a time he hasn’t delivered in a pressure moment.

At 30 years old, like Jay-Z once rapped, Okada has “lived a life you could write a book on” thus far in his career. I don’t see him stepping aside or falling off anytime soon. Will it turn people against him? I’m a self-professed Kenny Omega mark and I’m not to the point of turning on Okada, but I imagine among some fans it’s coming. The chatter after Naito’s defeat became a somewhat pronounced murmur, as some fans revealed as they think his latest booking was a misstep, as he stood in the way of another hot competitor. I think it is a testament to Gedo’s booking that he could avoid a full-scale revolt by fans.

If New Japan hadn’t come so far already with him, I’d understand. Okada has turned into The Golden State Warriors; a 1-man super team/dynasty if you will. For him to fail at this point, it would take some outside sorcery that would have to be explained by people much smarter than me.  And by fail, I mean no longer be great. As a 30-year-old native star, Okada is the CLEAR choice for New Japan to build around. It isn’t Naito who is 4-5 years older than him and it’s not Omega, although Omega is the key to their global expansion. Even then, how long will Omega really be around for? WWE is bound to back the truck up for him eventually.

He’s No Omega But…

Okada has been a star-system assassin since his main event career began, matching his critical acclaim with his kayfabe achievements. His average singles match rating (2nd of every pro wrestler ever) is noted above from ProFightDB via The Wrestling Observer.

I’d say lock in and get to enjoy it. He’s Ric Flair in the early 80’s of the NWA but better and younger than Flair was in 1983. Exactly how the rest of the decade was essentially owned by Flair, Okada has laid claim to this decade, and he’s about to lay claim to the next as well. While someone could always pop up out of nowhere to become a superstar, Okada will be the one in control ultimately. His competition isn’t so much the other wrestlers, but how long he can push himself to remain the man.