Latta’s Lariato: Nas Once Asked Who’s World Is This? The World Is Kenny Omega’s 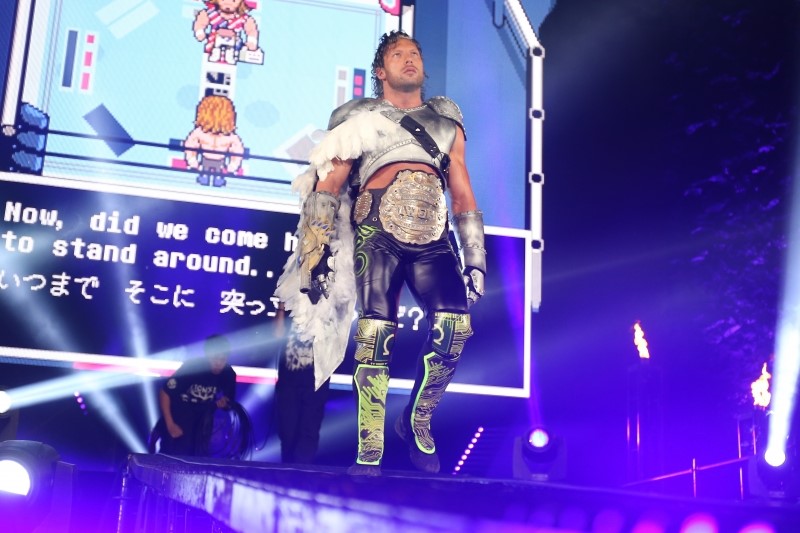 On the eve of his Wrestle Kingdom 13 showdown with Hiroshi Tanahashi, Kenny Omega the IWGP Heavyweight champion had the eyes of not just one, but three massive wrestling companies. He also had the leverage to play them all against each other.

As the now former champion of New Japan, and their biggest ticket to the west, Omega’s yearly “will he or won’t he” motivated New Japan on all fronts. Not only have they handsomely rewarded Kenny for his loyalty, but they’ve quietly assembled a cast ready for elevation under him in Will Osperay, Jay White, and Juice Robinson. Can they collectively act as a replacement for Omega that he’s apparently not returning to New Japan? The answer is that no one knows right now.

I’m a fan of wrestlers exercising their value to get the most out of any company for their services, because ultimately those bumps catch up to the body. Kenny had been an asset to literally any company he’s shown up for in the past 2 years, breaking gate and building records across the world with the addition of his name to a card more often than not. This is before you mention his ridiculously great match quality of 2017 and 2018.

His showdown of mammoth proportions with Hiroshi Tanahashi was for the soul of New Japan. The Meta angle was flipped on its head to aid the storyline one which made it compelling from both sides. It was a meeting in the middle of the ideologies that both Omega and Tanahashi represent, and they had one of the most incredible main events in Tokyo Dome history; easily a 5 star effort or beyond. With Kenny losing the championship it opened the door for everything else.

With All Elite Wrestling in the fold, and The Elite’s obvious connection to The Khans, all eyes were on the Tokyo Dome main event to give us some type of clue to where Omega will land. Most fans were hoping for some type of partnership between NJPW/AEW with Omega being the key. Recent reporting Dave Meltzer suggests New Japan will continue their US partnership with Ring of Honor, but after the Madison Square Garden show, who knows.

Cody and The Young Bucks are on the record saying they would like to continue working for New Japan, but at this time, that doesn’t seem to be in the cards. For competition on contracts, The Khans aren’t coming to the table like rookies. For those not in the know, they’ve got deeper pockets than everyone, WWE included should they choose, and according to a report on Fightful.com, one of the major companies they are talking distribution with is Time Warner.

Yes, that Time Warner. Formerly the parent company of WCW, an All Elite TV deal would give not only television exposure like TNT/TBS, but potentially a built in internet streaming path with the B/R App which is owned by Time Warner as well. Omega has always seemed like a goal oriented guy rather than driven by the cash, but maybe that’s a public persona.

Deep down, all wrestlers are trying to get paid. With the All Elite route, the money isn’t even a doubt. He has a chance to be what he will never be in New Japan, and to a lesser extent, WWE; the face of a company that is about to adjust pro wrestling history by being viable major league competition to WWE in America.

The least explored scenario would be Omega completely disregarding everything and jumping to WWE. I think WWE is another entity being used for Omega to get the best deal possible, but discounting their platform and reach is a fool’s errand, as WWE will always carry a certain amount of cache and prestige. I just don’t think Omega is the guy it goes very far with.

However, Omega has left the door wide open to go there. Can you imagine the first time Kenny Omega pulls aside Vince McMahon to discuss “the beauty of professional wrestling?” Vince will think the guy is a loon. It seems like a horrible match stylistically.

Omega’s moniker has been “Change the World” and we really haven’t gotten a great answer on what that means. I don’t think WWE is the place for that. I’d like to see him create his own deal that brokers a new partnership between New Japan and All Elite and allows him to draw and star across the globe against top tier opponents, and continue stories with guys like Okada and Naito where there are many lucrative and creatively fulfilling chapters to author. It would take serious political massaging to make this happen, but it is ultimately an unlikely scenario.

Like it or not, Kenny Omega is the most compelling name in wrestling today. His decision will swing the course of wrestling history. He’s either the key star to building a new top tier promotion in America, or WWE signs the biggest star they’ve picked up off the open market possibly ever. It would seal the signing up of this era’s worldwide game changing talent, look at NXT for Christ sakes.

He’s gotten to this point by pushing himself and opponents to levels rarely seen in wrestling and becoming an adopted son of Japan. He’s one of the most unique cases in history to the point so he’ll be good wherever he goes. But if there is anything I’ve learned about Kenny Omega, good isn’t good enough. He has a hunger for greatness, and that will factor majorly into what he chooses. Nas once said “The World Is Yours.” At this point in time the wrestling world, is indeed… Kenny Omega’s.