Welcome to the second #ModernDayNitro review! I will be going through WCW Monday Night Nitro randomly and watching them from a Modern perspective. This one is episode 31!

The first was published on PWMania.Com you can find it located here.

This is my debut column for Social Suplex, so here’s a little about myself. My name is Richard Latta you can follow me on twitter @DangerRich32 or @OneNationRadio. I’ve been a wrestling fan for over 18 years, and I’ve been writing online for almost a year on sites like PWMania.com and WhatCulture.com where I’ve gathered a nice audience. I run a podcast called One Nation Radio you can search right on iTunes for! Enough about me lets get to Nitro!

Live from Charleston West Virginia, Nitro Opens with Eric Bischoff claiming Nitro to be “History In The Making!”  And also to be real. This show would sadly prove to be anything but.

Immediately, we are thrown into action with The Taskmaster Kevin Sullivan and Arn Anderson teaming up to take on the white meat babyface himself, Hulk Hogan.

Hogan is out to a large pop, and plenty of pyro. He rolls in the ring and is immediately pummeled by Anderson and Sullivan. After a short comeback, Hogan promptly locks in a figure four leg lock that would make everyone take back all the joked they cracked on The Miz. Heenan chimes in with “He doesn’t have it on good!” Indeed, Bobby.

Amazingly enough, he locked it on again terribly. I’ve got to question how anyone was supposed to take The Taskmaster seriously as threat to Hogan. Hogan historically was a giant slayer, literally. All Taskmaster looked like was a miniature version of Hogan in his yellow tights, balding and all. 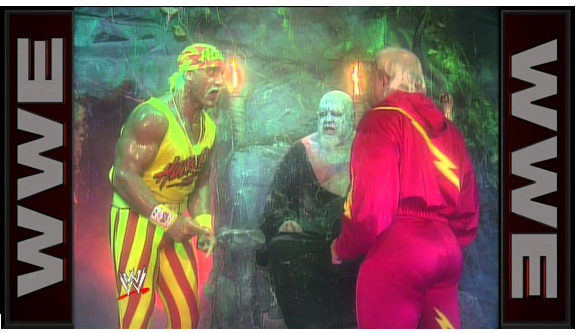 This was a handicap squash match, Sullivan and Anderson were better off entering the ring laying down.

However, after the match came the true theatrics. A fight with Jimmy Hart, and Hogan grabbing Liz and Woman in an eyebrow raising way were only the table settters for what happened next.

The Giant appeared, and layed Hogan out with his chokeslam which was unstoppable back in his WCW days. Naturally Hogan rose immediately and went into his classic finishing sequence. With the 7 Foot guy in a black one strap singlet, suddenly this looked like Wrestlemania III. However, it was 1996. The American Made song was awful too, long live Rick Derringer.

Public Enemy vs The Nasty Boys

This match is so terrible, im giving you permission to skip directly over re-watching this. Personally, I was never a fan of The Public Enemy or The Nasty Boys.  Public Enemy gets zero points from me for directly ripping off their group name from Chuck D, Flavor Flav & Co.

This match is why Pat Patterson hates Hardcore Wrestling. Literally anyone in the building that night could have had this match. The best part of this match came after it was over, where Rocco Rock sunset flipped on his own partner to send Jerry Sags through a table. Say it with me… END THIS MATCH!!

Bischoff said it wasn’t a match, so I won’t either. LOL

Bobby Eaton is out first with stereotypical British garb. Bobby Eaton who was formerly a southern good ol’ boy, had been converted to a British gentleman by Lord Steven Regal.

At the time, WCW was running a storyline that portrayed Macho Man as broke. Liz had staked claim to his money, and aligned with his biggest rival Ric Flair. Commentary spends half of the time talking about that.

As for the match, Bobby Eaton was a great bumper and heel at this time. As previously mentioned, Flair was at war with Savage. To enrage the Macho Man, Eaton did the Flair Strut, used the Figure Four (correctly) and HELD UP A FOUR HORSEMEN SHIRT WHILE HE HAD THE HOLD ON! This was best moment in the show thus far, by a mile.

Macho Man was so angered; he decided to use his finishing move. Still the best elbow drop ever.

Has there ever been a manager that did less than Liz? She just sat there and looked good for 15 years. I guess that was good enough.

I’m such a fan of the old “Man Called Sting” music, cowbell and all. Remember, he does this, and he definitely does that.

Luger and Sting are the tag team champions here. Honestly, I’d vote them as “The Greatest Tag Team That No One Remembers.” Sting’s ring gear is red and white, with the extravagant matching jacket. He should have worn that combo more.

The match opens with Flair repeatedly chopping Sting into Kip-Ups. Sting’s athleticism was world class. This match has to save this show.

After gaining a quick advantage, Sting press slammed Flair into The Giant’s arms twice. And twice Flair was rolled back into combat much to his chagrin. Upon being dumped outside a third time, Flair chopped his own partner in a fit of rage. Realizing what he had just done, he took off running toward the locker room as Nitro prepared a break.

We come back and Luger is taking it to Flair in the ring. After a series of non-sells as Flair reversed the offense, in came The Giant and he unleashed a beating on Luger that made him yell for the heavens. When watching this, listen to how funny Luger’s sell yell is. It completely engulfs the boom mic.

After being mostly ok for the night, Mongo decided to ruin it all by making a bad Rodney King joke that would have gotten eye rolls in 2014. His performance on commentary was far improved from the last show I watched.

Back to the match, where Flair and Giant continued to make Luger yell like an idiot, Flair locks in the best Figure Four of the night. WOOOOO!!!

Yes, incase you were wondering, Flair went to the top rope and it didn’t work.

Sting is in! His backward punches and chops are a work of art. Flair flips over the corner and takes out a poor cameraman in a moment of high comedy. Suddenly, Woman finds a cup of coffee (where did she get that?) and throws it at Luger, only to hit Sting who had Flair locked in the Scorpion Death Lock. DQ Finish.

The Giant then chokeslammed Sting and Luger, who didn’t get up like Hogan earlier, and Flair attempted to pin a man while a match wasn’t going. It was funny, but dumb.

This episode was painful to get through. The only things of note were Bobby Eaton enraging Macho Man, and the main event tag team match to see a very young Big Show, in there with 3 Hall of Famers. You may laugh, but this show is literally…

What did you think of this show? Comment below or Hit Me on Twitter @DangerRich32 @OneNationRadio. Check out One Nation Radio on iTunes.