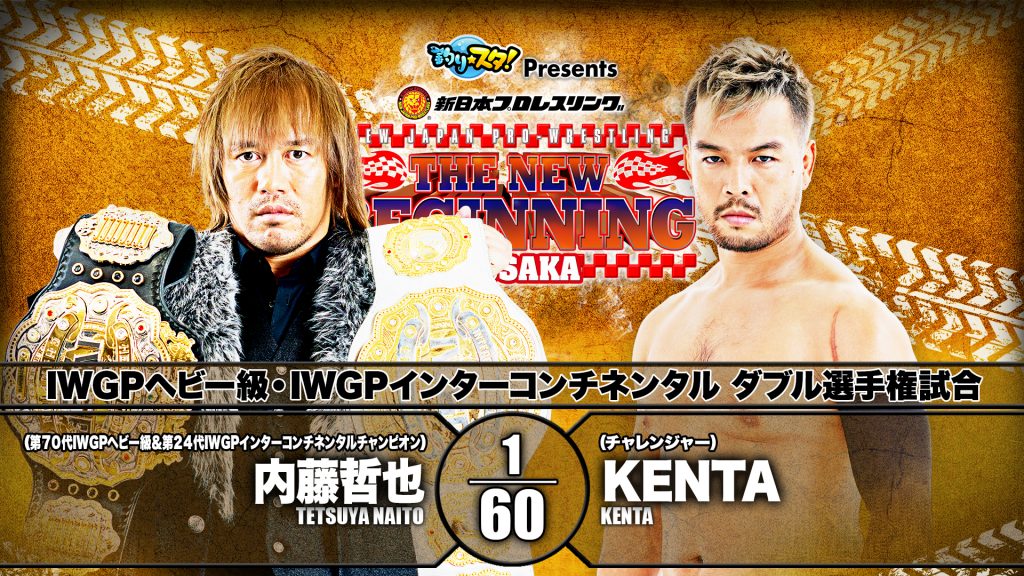 Our first match is Nakanishi’s final match in Osaka Jo-Hall. He teams with his fellow Third Generation Partners, Tenzan, Kojima, and Nagata against the GBH team of Makabe and Honma along with Henare and Taguchi. The story of this match is mainly been Makabe and Honma against Nakanishi and Tenzan. These 4 have faced off multiple teams with both teams getting wins. The focus here will be on Nakanishi who will want to go all out for a match that could be possible his final match teaming with all of his Third Generation buddies.

Our first of four title matches features Roppongi 3K taking on the Suzuki-Gun duo of El Desperado and Yoshinobu Kanemaru. These two teams have been feuding since 2018 with Desperado and Kanemaru being a constant thorn in Roppongi 3K’s side. However, recently R3K beat them in Super Junior Tag League which would seem to have ended the feud and went on to win the IWGP Junior Tag Titles for the 4th time. At New Years Dash in a 4-Way tag match, Desperado and Kanemaru pinned the tag champs which leads to this match once again. The last time they faced off for the belts, Despi and Kanemaru came out the winners. Will lightning strike twice? Will the injured leg of SHO come into effect, or will Roppongi 3K finally put away this Suzuki-Gun duo and move on from this feud?

The following match sees 7-men returning from the New Beginning in USA tour. At the New Beginning in Atlanta, Tama Tonga and Tanga Loa defeated FinJuice to win back the IWGP Tag Team Championship for the 6th time. However, the thing to note was at New Years Dash Tana and Ibushi seemed to challenge FinJuice. This makes it interesting as we could see one of two teams challenge for the belts following this match. This should be a good one.

Next up is the two singles matches from night two of New Beginning In Sapporo in a tag match. The CHAOS team of Okada and Ospreay take on Dangerous Tekkers. Ospreay despite losing his title match to Sabre at Sapporo pinned ZSJ in an Elimination Tag Match at Kouraken and earned another shot this time at RevPro High Stakes. Meanwhile, Taichi and Okada continue to fight and Taichi wants revenge from suffering a single’s loss to Okada. This match is a dark horse match and could be a great one to watch.

In a first time singes match, the Cold Skull SANADA takes on Switchblade Jay White. This match comes about following New Year Dash when SANADA pinned Jay White via roll up in the main event. After the match White viciously attacked SANADA. SANADA had a strong 2019 heading into 2020. Despite failing to win his title match at WK, he looks to continue to climb up the card but in his way is Jay White who since losing the IC Title has taken a back seat but will want back into the top spot again. This being a first time meeting between the two, makes it an intriguing match up and could be a solid overall match up.

The second title match of the night features the IWGP Junior Heavyweight title on the line as Hiromu Takahashi defends against Ryu Lee. This is their first single’s match since the G1 Special in San Francisco. This match I’ll be honest am surprised to see it happen so quickly. I expected this for a bigger show like Dominion or Wrestling Dontaku but hey Osaka Jo-Hall needed big matches and this is one of them. Ryu Lee has had a good end of 2019 to 2020 despite the CMLL debacle. He became ROH TV Champion and joined La Faccion Ingobernable with his brother Rush and Kenny King. This match also came about following them teaming up against Jushin Liger and Naoki Sano and then during post-match comments Hiromu said Ryu is the first challenger. This match will bang, simple as that. Can Ryu Lee reclaim his title or will Hiromu put him away just like the last two times Ryu has challenged for the belt?

This is a dream match of mine no joke. When I heard Suzuki’s theme play after Mox’s match with Juice my jaw hit the floor. Since Suzuki laid out Moxley at Wrestle Kingdom the two have been brawling this whole tour. Suzuki seems to have the advantage in the ring, but outside the ring is where Mox thrives. This match will without a doubt, steal the show for me and be a hard-hitting affair. Suzuki coming out as champ could happen more than you think it could.

The main event of the evening sees both the IWGP Heavyweight and Intercontinental Championship on the line as Tetsuya Naito takes on KENTA. This match came about following Wrestle Kingdom when KENTA attacked Naito after his race with Okada leaving him with a ton of heat and the “right” to challenge. These two have had a war of words in their backstage comments but in-ring nothing of note has happened to excite me. With this being the main event I truly hope they pull out the stops to make this match a banger.