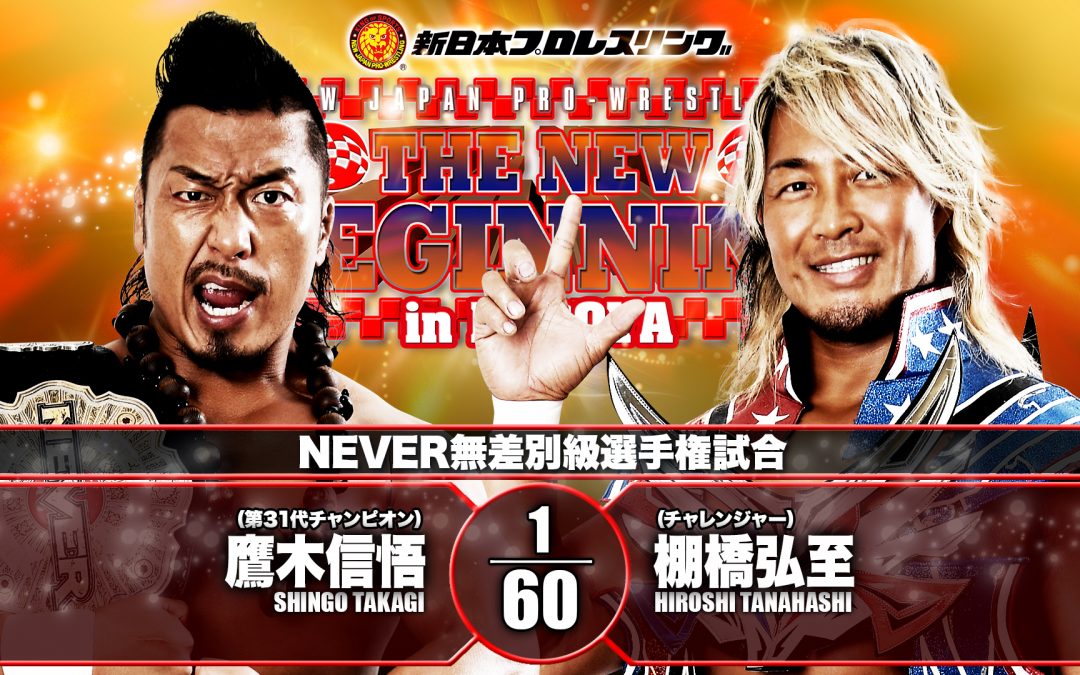 Opening the show, we will see The Rainmaker Kazuchika Okada team with the provisional 2021 KOPW Trophy holder Toru Yano taking on Bullet Club’s King Of Darkness EVIL and Yujiro Takahashi. Okada and EVIL continue to heat up a potential singles match in the future. However, EVIL has shown no interest in wanting to face Okada one on one.

With Dick Togo in Bullet Club’s corner, there is no doubt this looks to be more a handicap match than a straight tag match, Yano will do his usual shenanigans. Yujiro might want to go after Yano’s KOPW Trophy and become the king of pimp wrestling, Bad pun aside this should be a fun opener.

Prediction: Okada and Yano pick up the win.

The next match features previews three matches happening at the two nights in Hiroshima. These men have been facing each other all throughout the Road to The New Beginning Tour. These matches have been fun especially with the mini rivlary between Tomoaki Honma and Tetsuya Naito. Their beef began at Ota City when Honma eliminated Naito to win the Elimination match. Naito has seemed to brush it off in usual Tranquillo fashion but this could lead to a singles match down the line. This will be your usual fun LIJ multi-man match.

Prediction: L.I.J pick up the win

Loser must retire the Mongolian Chops: Hiroyoshi Tenzan vs. The Great-O-Khan

Our first major match sees Hiroyoshi Tenzan taking on the United Empire’s Great-O-Khan. This match came about following New Years Dash when O-Khan laid out Tenzan with his Tombstone Driver. Tenzan was out for half the month but came back at Ota City with vengeance in mind laying out O-Khan with chair shots,

This is only Tenzan’s 4th singles match since his G1 Retirement in 2016 so this is a rarity. Now, this just a normal singles match but has major stakes with the loser having to retire the Mongolian Chops a move that is pretty much only been used by Tenzan. O-Khan using it is will get heat, and if Tenzan is to lose, well it would go nuclear in a normal crowd setting. While some may say this match won’t be good with Tenzan’s limited ability his match last year with YOSHI-HASHI in New Japan Cup leaves me to believe Tenzan can still go and will do his absolute all in this match. This match could be surprisingly good.

No Disqualification Match: Satoshi Kojima vs. Will Ospreay

Our next TenCozy vs. United Empire match features The Strongest Arm Satoshi Kojima taking on The Commonwealth Kingpin Will Ospreay. Similarly at New Years Dash Ospreay and O-Khan along with Cobb laid out TenCozy and Tsuji. Kojima came out with a vengeance constantly attacking Ospreay at any chance he can get. He continued to show his anger in backstage promos. When Tenzan came back, chairs began getting involved which lead to Ospreay giving Kojima the option to make their match a No DQ match. Kojima was more than happy to accept. Both men are coming off losses at Wrestle Kingdom with Kojima losing to KENTA and Ospreay losing to Okada. So both could do with a win but only one can.

The main event of the evening features The Dragon Shingo Takagi taking on The Ace Hiroshi Tanahashi. During the main event of New Years Dash Shingo willingly seemed interested in Tanahashi challenging for his belt and Tanahashi was more then willing. This will be Tanahashi’s first ever time challenging for the NEVER Openweight Title. This is a dream match for me and many other people. An almost battle of generational talents of New Japan and Dragon Gate,.

Shingo has been a great talent since showing up in 2019 and also has been a great NEVER Champion with solid defenses against Tomohiro Ishii, SHO, El Desperado, Minoru Suzuki, and Jeff Cobb. As for Tanahashi he’s been slowly moving down the card no longer challenging for World and IC titles. The last titles he held were the RevPro and IWGP Tag titles. I think him winning and working with hard hitting guys and potentially some juniors could be very interesting. Tanahashi vs El Phantasmo perhaps?