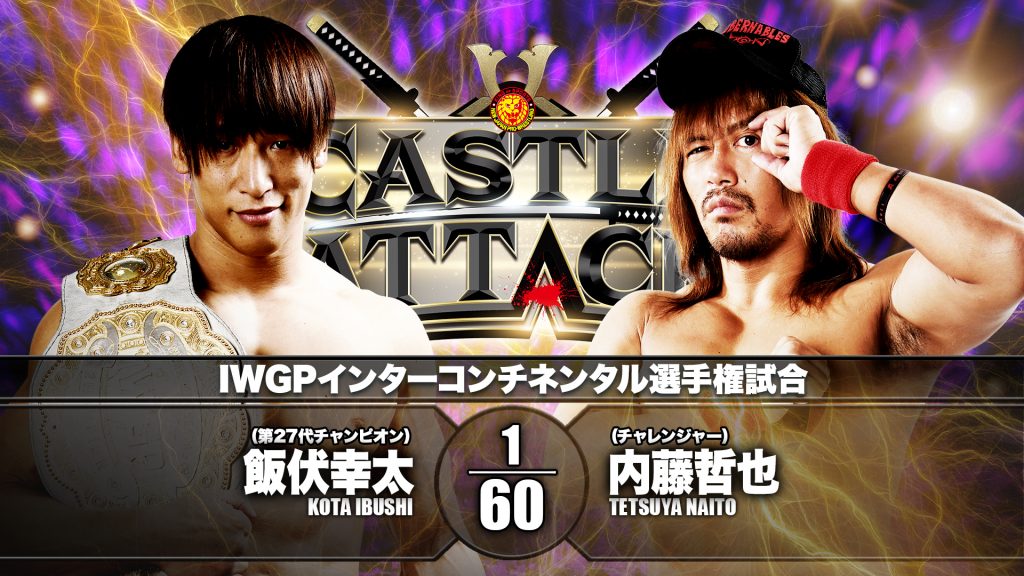 Night Two Of Castle Attack. We got 4 title matches and a guaranteed new champion in one of them. Let’s get straight into it. (there will be no spoilers or talking about night one as this is made before Night One has aired)

This will be a physical and fun match-up to watch. It would be a big win for Ospreay and Cobb to beat the 6 Time IWGP Tag Team Champions Kojima and Tenzan. Ospreay and Cobb could be a super team for the Tag Divison of New Japan.

Prediction: Ospreay and Cobb pick up the win

Our next match features six of the men that had singles matches on night one. These six men will most likely be in New Japan Cup 2021. So this will be a chance for these six-men to make an impression. This match should be your usual CHAOS vs. Bullet Club matchup with hopefully no shenanigans but with both Dick Togo and Gedo at ringside, this will be chaotic, to say the least.

At World Tag League back in 2020, YOSHI-HASHI had pinned Tama Tonga. So with him pinning both of them in a couple of months, he requested to challenge for the Tag Belts with Goto. This did not sit well with G.O.D, who attacked them in their press conference. Goto and YOSHI-HASHI failed to take the belts off Dangerous Tekkers. Can they do it and become double champions? Or will G.O.D continue their reign and head into New Japan Cup as Tag Champions?

Our next match features Hiroshi Tanahashi defend the NEVER-Openweight Championship against The Great-O-Khan. This match came about following Tanahashi winning the NEVER Title from Shingo Takagi in a great matchup. Tanahashi would go through his usual title main event celebrations but at the end would be attacked by The Great-O-Khan. O-Khan laid him out and declared himself the next challenger to the title.

These two also previously faced off at Wrestle Kingdom in a grudge match. This feud is more than a simple grudge. This is about Generations. Tanahashi representing the Old Guard, and O-Khan represents the next generation. Since losing the IC title to Minoru Suzuki every title reign, Tanahashi has failed to defend a title. World Title: Lost to Jay White, RevPro Title: lost to ZSJ, Tag Titles: lost to Dangerous Tekkers. Can Tanahashi finally break that streak, or will the Great-O-Khan bring The United Empire their first New Japan title?

It feels sad knowing this was going to be Hiromu Takahashi defending against El Phantasmo. Unfortunately, Hiromu got injured and is out for 6 months. Hiromu vacated the Junior title on Thursday. Following the main event where El Desperado and Yoshinobu Kanemaru won back the IWGP Junior Heavyweight Tag Team Championships from El Phantasmo and Taiji Ishimori, El Desperado said he and Phantasmo should face off for the now-vacant IWPG Junior title. However, he was interrupted by Hiromu’s Tag Partner and Stablemate BUSHI. Hiromu wanted him to be his replacement which made this become a three-way match.

A win for either person here would be good for their careers. BUSHI would continue the L.I.J run of the belt, being the man Hiromu wanted in the match. BUSHI is on a small hot streak following a win over Master Wato at New Beginning. For Phantasmo, well, he’s undoubtedly the biggest Heel in the junior division. His Sudden Death Superkick is deadly. He only needs one to finish you off. Him winning the belt will give New Japan the most credible heel champion for a while. As for Desperado, people have been waiting for him to get a Junior title run, and a win here would put him over big. This should be a chaotic match. Without a doubt, all three men are going all out to help fill the massive void that Hiromu has left with his injury.

Our main event will see the IWGP Intercontinental Title on the line separately from the world title for the first time since Wrestle Kingdom 14 Night One. Kota Ibushi defends against Tetsuya Naito. This match came about after Ibushi retained against SANADA. It had become known Ibushi wanted to unify the belts. Still, Naito would come out and say he is not credible to challenge the World title but wanted to challenge for the IC title and keep that belt (even though he has in his long career hate the IC title and battered it about).

For a while, this match looked to potentially be on the shelf following a possible ACL Injury to Naito. However, after taking some of Road To shows off, it seems that his knee is in good condition. Still, I won’t lie, I worry that this injury may hinder the match. But this is Ibushi vs. Naito or, as I have mostly referred to it as “Ow My Neck The Musical,” So no doubt we will get one Neck Bump in this match cause these two always try to murder each other when they face off.

Do they want to keep the IC title or end it? For me the IC title is too big to get rid of with guys who never really became the main stars of New Japan and bigger names who would never logically get a chance at the world title like Hirooki Goto, Minoru Suzuki, and Chris Jericho,. But yeah it’s Naito vs. Ibushi, so you know this is going to be a banger match.