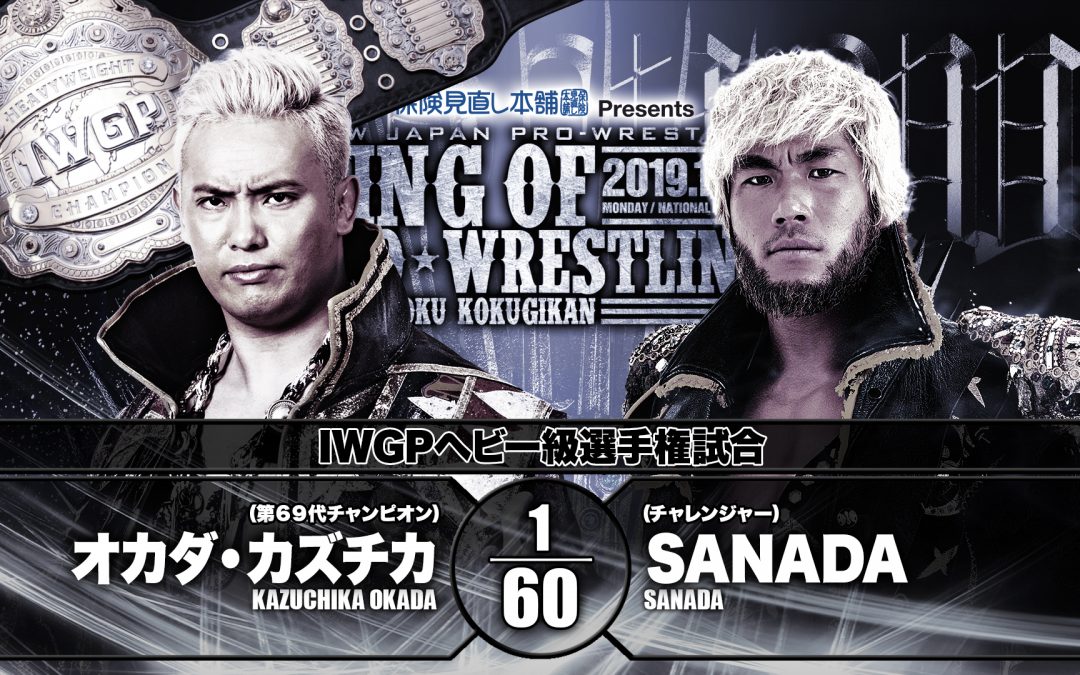 I’m back with a preview of the final big stop on the road to the Dome, King Of Pro Wrestling. The card features 3 title matches, a contract up for grabs and a blood feud finally coming ahead. This looks to be one hell of a show!

The first match sees the return of El Desperado who has been out with a jaw injury since before the start of the Best Of The Super Juniors. It will be great to see him back in action. This match will be a preview of sorts for the up and coming Junior Tag League as Roppongi 3K, Taguchi and Romero, and Desperado and Kanemaru will be competing in the tournament. This should be a decent match. Take a shot if Suzuki-Gun attacks before the bell.

Prediction: Suzuki-Gun pick up the win with Desperado pinning YOH

This is the fourth and final match of a four-match series celebrating 20 Years of Hiroshi Tanahashi. Tanahashi made his debut in October of 1999 in a singles match against Togi Makabe (then known as Shinya Makabe back when they were Young Lions). It will be interesting to see Honma on the opposite end of his GBH Tag Partner while Yano and Tana also have history. This match could very well be one to watch.

Naito has had a rough few months. He failed to finish top of his block in the G1 and then lost the IC title to Jay White at Destruction. He teams with Shingo who hopes to get back on track following his lost to Goto. Taichi and Archer make their New Japan Returns since last seeing them at the G1 Climax. Sabre hopes to make an impact in the title picture with him wanting in this tournament for both the IC and World Championship. Oh and BUSHI is there as well. Most LIJ pairings work wonders and all people in this match are solid workers. This should be a fun one.

Here we have a preview of a potential IC Title match as Jay White along with NEVER Champion KENTA and Yujiro take on Goto, Ishii, and YOSHI-HASHI. White following his IC title victory over Naito now has Hirooki Goto on his crosshairs. KENTA could possibly have a Stone Pitbull in his way. This match could be good but Bullet Club shenanigans could be ahead.

This is the match I’m most hyped for! These two have been feuding since Road to Wrestling Dontaku. It heated up again during Road To Destruction where Suzuki attacked Liger on commentary and then piledrived him on a chair. This feud then reached a fever pitch when at Destruction in Kobe where Liger unleashed…

Another fact is that most people know of their MMA match but this is not the first time Liger has faced Suzuki in NJPW. They faced off in 2012 at Road to Tokyo Dome where Suzuki beat Liger in about 11 minutes. Can Suzuki do it again or with the rumors of Suzuki wanting to leave means Liger gets the win.? Either way this match will be a banger.

This is the first of 3 title matches as we see the Aerial Assassin take on the HeadBanga for the IWGP Junior Heavyweight Championship. This match has been building up a long time with Phantasmo beating Ospreay in BOSJ and then winning the Super J-Cup. At Destruction In Kagoshima Phantasmo and Ishimori defeated Ospreay and Eagles to retain their IWGP Junior Heavyweight Tag Titles. These two are currently at a record of 3-1 in singles matches. There is a lot of history going into this match and has all the chances of being a banger. Can Phantasmo leave with three belts? He very well could. He has been heavily pushed and given chances to show why he is great. But never doubt the Aerial Assasin.

In the next title match we have the Death Rider Jon Moxley defending the IWGP US title against Juice Robinson in a No DQ Match. This has been a feud built on their history from FCW. Moxley debuted at the Best Of The Super Juniors Final where he beat Juice to win the title. Following this Mox went on a tear through the G1.

Since losing the belt, Juice had to rebuild his confidence. He got some revenge on Mox by defeating him in the G1 which earned him this rematch. This match should be a lot like a US No Holds Barred match with lots of weapons and Japanese tables galore. These two are 1-1 in NJPW and this match could be redone again at the Dome if Juice is to win. But what is Moxley’s plan for WrestleKingdom? We will have to wait and see.

The semi-main event features The Golden Star taking on The King Of Darkness for the right to face the IWGP Heavyweight Champion at the Tokyo Dome. This is only their second ever singles match. Their first being at this year’s G1 where EVIL pinned Ibushi. Following Ibushi besting KENTA at Destruction in Kagoshima, EVIL came out from the darkness to challenge Ibushi.

EVIL has momentum on his side. He pinned Ibushi with Darkness Falls in two tag matches. This match is very intriguing to me as I feel both Ibushi and EVIL have different styles to each other, but I think this means their match could be one to look out for.

The main event sees The Rainmaker Kazuchika Okada defend the IWGP Heavyweight Championship against Cold Skull SANADA. The record shows Okada is 6-1 in singles matches against SANADA with this being their 4th singles match this year. These two have a combined time of 3 hours, 2 minutes and 30 seconds across those 7 matches and an average of about 26 Minutes and 4 Seconds.

With Okada saying SANADA is his great rival could we see a title change? I doubt it but would there be any point to Okada just beating him again after it took SANADA all this time to finally best him. So the next question is do they go to a time limit draw? The longest they have gone is 38:03 at Dontaku this year. So the odds may not be likely but you can’t count it out going to a draw. A draw would allow SANADA leverage for another match down the line. I love both guys but I don’t want to see them wrestle again next year (but they most likely will at the G1 calling it right now).

That’s King Of Pro Wrestling. Hope you guys enjoy the show. Until next time ADIOS!!!!!!!!!!